Supporting your partner during the birth - what the heck is that supposed to mean?

DIYFather.com was brought into this world by Wellington-based dads Scott Lancaster, Eric Mooij and Stefan Korn who recognised the need for a dedicated website for fathers. Based on their own experiences of struggling to find useful parenting related information specifically aimed at dads they created DIYFather.com

Our first child was a fortnight late and when he finally made an appearance he was ugly - I mean like one of the bad guys out of Peter Jackson's imagination. Grey and wizened with hands like talons. I obligingly pointed this out to the assembled maternity staff. "Oh you poor, ugly little bugger," I believe were my words. Next thing you know I was clubbed to the ground by a clutch of midwives and nurses who all had black belts in frowning. 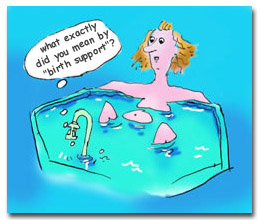 "Shhhh. The mother can hear you!" they hissed. "The mother has eyes, she can see for herself," I replied in my insightful but thoughtless way. The mother was high as a kite on drugs but still managed to squeeze my hand in that special code of ours that says "Shut up, you prat!" This was not an auspicious start to this "support" thing that blokes are told to do. What the hell does "Support" mean. Do I stand beside the stirrups chanting, "Push! Push! Push! Breath! Breath Breath!". I decided that the best way I could show support was to share the experience and sample some of the gas they were giving my partner....well, it's a start.

Support is a big thing - you don't want to rush it. I'm going to submit to dictionary.com that "support" means "stand around like an idiot and feel guilty and inadequate". You don't have to feel guilty about anything in particular, general guilt will do. I offered that I could best support my partner by keeping out of the way in the hospital cafe. The consensus amongst the assembled, well meaning and overtly competent maternity crew was that this was not the best idea they had heard. In fact it was a rather bad idea, stupid and selfish. Typically male in fact. But let's be real - if maternity wards were smart they would attend to fathers needs - they would have a golf or fishing shop right there in the ward. New fathers could spend hours and thousands of dollars on inane little gadgets, blissfully unaware that their chances of seeing a golf course in the next fifteen years is virtually nil. These shops could fund our entire maternity service.

Actually - I want to revise my definition of support. "Support" means extracting your wife from the maternity ward before she falls into the clutches of the lactation experts. Our baby had a bit of trouble attaching and every few hours a new expert would sweep in, immaculately groomed with a cute handmade badge declaring her confidence in herself, emanating professionalism from every pore, and announce as loudly as she could "I hear you are having trouble feeding - I'm an expert at this - we'll have this sorted out in no time." An hour later, shoulders slumped, she would retire defeated. After a few rounds of this I was trying to calm down one very stressed new mother and escape seemed the best solution.

And then something wonderful happened. Just as we were packing our bags, a battered old women wearing what looked like an orderlies uniform (I could have sworn she had a fag hanging out of her mouth) poked her head round the door and said, "I hear you are checking out. Have you bathed him yet?" We hadn't. "Would you like me to show you what to do?" We would. This women is what maternity staff should all be like - laid back, non professional, non judgmental, non anything. She absolved all my partners guilt about breast feeding in a few words, she showed us how to hold junior, how to bath him, swaddle him, all the things that the others were too professional and well qualified to do. Every word she uttered to us expressed her confidence in us as parents, and assured us that everything would be okay and we were going to love our new son and our new lives. We learned that she was actually a senior A&E nurse who got sick of patching up drunks and wanted to work with babies. Although we only spent maybe twenty minutes with her she undid all the damage that a day and a half in maternity did to our confidence. They need to find this woman and clone her - she's the one in the very unflattering green smock.

I don't mean to dump on maternity wards - I'm sure they all have green smocked angels who flit in and undo the carnage that the zealots create but oddly enough, what support really meant at that time was not holding hands and cooing empathetic sound bites to my partner while she was in agony, as ante natal classes suggested. It was about taking charge when your partner needs you to. When she was being savaged by very well meaning, highly qualified and skilled health professionals support meant me saying "Enough - this isn't helping you, we're going home." That's all - making a decision for the good of your partner when they are too overwhelmed to make it for themselves. Sometimes this can be the hardest thing. When your new born baby and partner is in the hands of experts who are you to say, "Bugger off." Well - you are the partner and father and it's important that you remember that.