Win a copy of Love Letters by METRONOMY 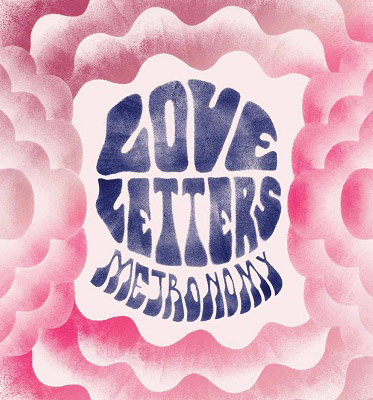 Two years have passed since the public heard any new music, and now Joseph Mount is back.  His 2011 album THE ENGLISH RIVIERA (a love note to England’s south coast where Joe grew up) was lauded by the critics, evolving into a sleeper hit that elevated Metronomy to the upper echelons of the UK's musical elite.  Joe Mount quietly became a creative force to be reckoned with around the world and one of the must-see live acts with a legion of devoted fans.  Subsequently, THE ENGLISH RIVIERA was Mercury nominated, selling a quarter of a million records worldwide and Metronomy found themselves on front covers, playing huge sell out shows globally and a one off show at London’s prestigious Royal Albert Hall.

In a truly innovative development in first listens of new music, ‘I’m Aquarius’ is now available for via The Night Sky app, which can be download from iOS or Android app store.  The Night Sky is a beautiful, magical way of identifying the stars, planets, galaxies, constellations and even satellites above in the sky in an awe-inspiring visual way.  Stand anywhere and hold your handset up to the sky and The Night Sky creates an enchanting replication, which displays the names of the stars, planets and other objects one can see in the sky.  Even if your view is obscured by clouds or daylight the app will know which stars, planets, constellations are hiding from your view.

The track will be available on the app for one week (ending 19 Nov).  All users (new and existing) will receive an update that they need to activate.  Once activated, users must scan the sky, looking for the Aquarius constellation.  Once found, they will be able to play the single by simply clicking the constellation itself.

LOVE LETTERS is Metronomy’s masterpiece.  Not losing any of the glowing warmth and ear worm melodies that makes Metronomy’s sound so distinct, LOVE LETTERS is more developed, further evolved - Joe Mount excels in his lyrics and song writing delivering what sounds like a truly classic record.

Recorded at Toe Rag studios in London; an analogue studio traditionally known as a home for rock’n’roll acts such as The White Stripes, LOVE LETTERS tries to do fresh things in an old-fashioned way.  It takes richer methods of recording and injects them with the shock of the new – of tight electronics, and experiments in sound. It does so not to be retro, but to embrace the quality standards of the past. It also aims to be up there with the greats, reaching for those old stars.

LOVE LETTERS was released on March 7 and is now on iTunes.

GetFrank is pleased to offer our viewers a chance to win a copy of Love Letters by METRONOMY. To enter simply comment below then head over to our Everything Else Forum to make a decent contribution to finalize your entry. Make sure you check out next weeks Newsletter to see if you're on of our winners.