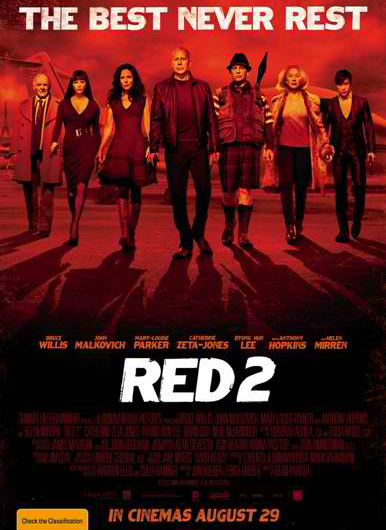 To succeed, they'll need to survive an army of relentless assassins, ruthless terrorists and power-crazed government officials, all eager to get their hands on the next-generation weapon. It's a mission that takes them to Paris, London and Moscow, where they cross paths with Frank's seductive former flame Katja (Catherine Zeta-Jones), as well as Bailey (Anthony Hopkins), a brilliant scientist from Frank's past. Outgunned and outmanned, they have only their cunning wits, their old-school skills, and each other to rely on as they try to save the world-and stay alive in the process.

Get Frank has 5 x double passes to see RED 2 in cinemas. To enter, simply comment below! Make sure you check out next week's newsletter to see if you are a winner and claim your prize.