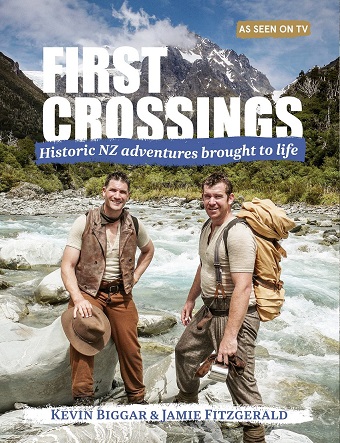 By Kevin Biggar and Jamie Fitzgerald

Kevin and Jamie don't just take the same routes, they also wear the same clothes, use the same equipment and try the same food. While fascinating, this approach also leads to the pair finding themselves in some terrifying, death-defying and very uncomfortable situations. It's certainly an eye-opener as to how tough our pioneer adventurers were.

The book adds a great more detail and background to each of the stories – both the historical backgrounds and also Kevin and Jamie's reactions to the stories and to their attempts at recreating them.

Of the ten stories, five are from the first series and five from the second. They include Whitcombe and Lauper's first crossing of the Southern Alps; Grave and Talbot's attempt to find a pass into Milford Sound; Fyfe and Graham's ascent of Mt de la Beche. As well as several 19th century stories, First Crossings includes 20th century explorations such as Edmund Hillary's solo ascent of Mt Tapuaenuku, and Kelly Tarlton's diving of the Elignamite wreck (i.e. treasure hunting).

Kevin and Jamie are no strangers to extreme conditions. They were the first Kiwis to walk the 1200km journey to the South Pole unaided (read about this in Kevin Biggar's Escape to the Pole) and they also set a new world record for rowing across the Atlantic in 2003.

GetFrank is pleased to offer our viewers a chance to Win a copy of First Crossings. Historic NZ adventures brought to life. RRP $45.00. To enter simply comment below then head over to our Suave Forum to make a decent contribution to finalize your entry.