WIN 1 in 4 copies of Dark Lands 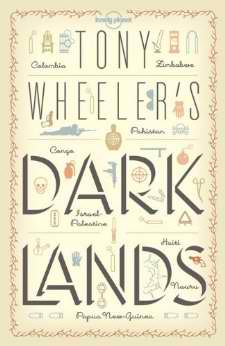 Now he’s going deeper into some of the world’s darker corners to explore another gallery of troubled destinations in Tony Wheeler’s Dark Lands, published this month.

In his Introduction to Dark Lands, Tony writes: “My travels through the bad lands turned out to be interesting, educational and, perhaps surprisingly, enjoyable, so a follow-up seemed an obvious plan. I’d even concluded the first book with an extended list of other troubled places I could have tagged on; a number of them feature in this book. ‘Bad’, however, wasn’t the word I wanted … Eventually ‘Dark Lands’ emerged, and felt right: each had some distinctly dark shadows in its story, which to a greater or lesser extent coloured the atmosphere of the country today.”

In the course of his journeys through these Dark Lands, Tony has stones thrown at him in Palestine, scores a speeding ticket in Zimbabwe, gets arrested for photographing a bar in the Congo, and visits Osama bin Laden’s Abbottabad in Pakistan.

Travel and discovery have been at the heart of Tony Wheeler’s life and career. He founded Lonely Planet with his wife Maureen in 1973 to publish Across Asia on the Cheap, the story of their trip from London to Australia. Forty years later, Lonely Planet is the world’s most successful travel publisher. Tony and Maureen completed the sale of Lonely Planet in 2011, and they now divide their time between Melbourne, London and travelling the globe.  Learn more about Tony at www.tonywheeler.com.au.

Get Frank is pleased to give 1 in 4 lucky winners the chance to win a copy of Dark Lands. To enter simply comment below then head over to our Suave Forum to make a decent contribution. Check out next weeks Newsletter to see if you're our winner.