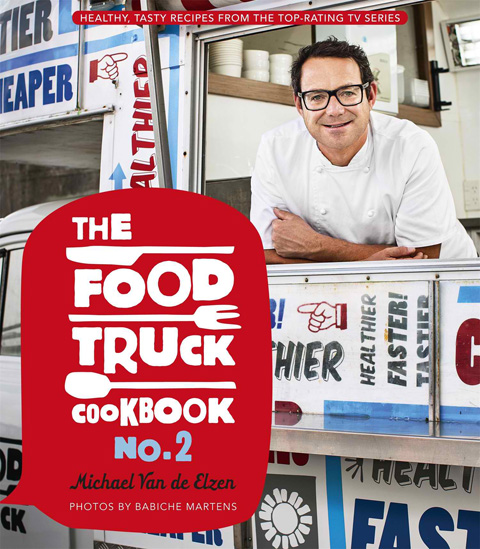 The Food Truck was one of the highest-rating shows on TVNZ for both its first two series, and the book that accompanied the show was a very popular bestseller. Michael himself has become a star who is much liked for his self-deprecating humor, easygoing style, his belief in healthier eating and, most important of all, his great tasting food.

Now he’s back with the second Food Truck cookbook, based on series three. There’s even more delicious and tasty food and challenges in which Mike puts himself up against standard fast-food outlets to see if he can persuade Kiwis to try his healthier,  tastier options.

With loads of meal ideas and inspiration for entertaining family and friends, this cookbook is packed with stunning, achievable meals and snacks, from old favorites with a twist to more unusual world food recipes.

Michael Van de Elzen was trained at AUT and early in his career worked at Kermadec and Antiks in Auckland and then in London at Bluebird and Bank. He and his wife Belinda opened the award-winning Molten in Mount eden in 2003. Mike sold the restaurant in 2011, just in time to become the star of the high-rating TV  series The Food Truck. He now works a consultant to restaurants and on the third Food Truck series.

GetFrank has 1x Food Truck Cookbook No.2 to giveaway. To enter, simply comment then head over to Health & Fitness forum to make a decent contribution in order to finalise your entry. Make sure you check out next weeks newsletter to see if you are our lucky winner and claim your prize!