Todd Niall is an Auckland-based journalist and author/publisher of  'Bambina; The Fiat 500 in New Zealand'

Almost 50 years since the arrival in New Zealand of the first Fiat “Bambina” the Italian marque is hoping that its award-winning successor, the “new” 500, might work the same magic on the local market.

However, the market into which the European Car of the Year Award-winner steps in late April couldn’t be more different from the New Zealand which welcomed the twin-cylinder 500 back in 1959. 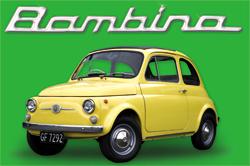 Government policy then dictated every move in the new car market, and every single vehicle required an import licence – a commodity so tightly rationed that it was known in the motor trade as a licence to print money.

The Fiat 500 reached New Zealand in small numbers, assembled in its home factory in Turin. It was motor industry entrepreneur Noel Turner, Italian diplomats and Turner’s influential friends in high places that secured 300 licences annually for the baby Fiat to built at the Turner family’s VW Motors plant in Otahuhu.

Assembly with as much local content as possible was the fast track to increased licence quotas, and nobody played the game better than Noel Turner. The 500 thanks to the low cost of the imported kits, reached the dizzy height of almost 50 per cent local content once labour and materials such as glass and upholstery were added.

The Fiat 500, designed to get increasingly prosperous Italians off their Vespas and into four wheels,  became a fast seller in car-starved New Zealand. Women especially fancied it, partly because they didn’t face a wait of months or years for a British Mini.

The distributor Torino Motors played on its appeal to women, providing the 500 first prize in the Miss New Zealand beauty pageant from 1966. Torino also entered an all-womens’ team in the Wills Six Hour production car classic at Pukekohe in 1965. Evelyn Hadfield and Margaret Hough brought the 500 home last – of course – but maintained its three year run of perfect reliability in the event.

A Kiwi claim to fame is the name “Bambina” Torino Motors Rob Elliott decided the name was  needed to lift the image of the improved 500F version in 1965. 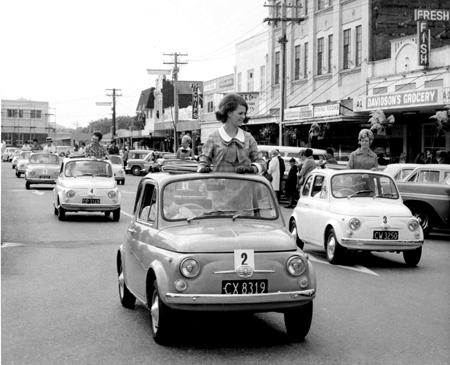 More than five thousand 500’s made it to New Zealand, but today fewer than 400 are registered with the LTSA. Its global cult status and high value saw hundreds shipped to Japan and the US in the 1990s.

Fiat has cleverly captured the look of the original, in a car which is significantly bigger and a real state of the art European mini. The company also worked hard to ensure the passion felt for the classic 500, was transferred to the new generation car. It’s launch in Turin was brought forward to coincide almost to the day, with the 50th anniversary of the Bambina model.

Half a century on New Zealand’s Fiat distributor Ateco finds its hands slightly tied by the European success of the new 500. Despite increased production at its plant in Poland, Fiat can’t build enough of the retro-look successor. Now it is popularity in Europe, rather than import controls and bureaucrats that will dictate sales volume Down Under.