It’s 7.30am on a mid-January morning and I’m already at the office. I am not in any way, shape or form a morning person, and although I am already onto my second coffee of the day, I’m ready to curl up into a grumpy, fairly hairy ball and go back to sleep. But if I think I’m having a bad morning, that’s nothing compared to what the residents of the apartment buildings surrounding NZ Performance Car Towers are about to experience… 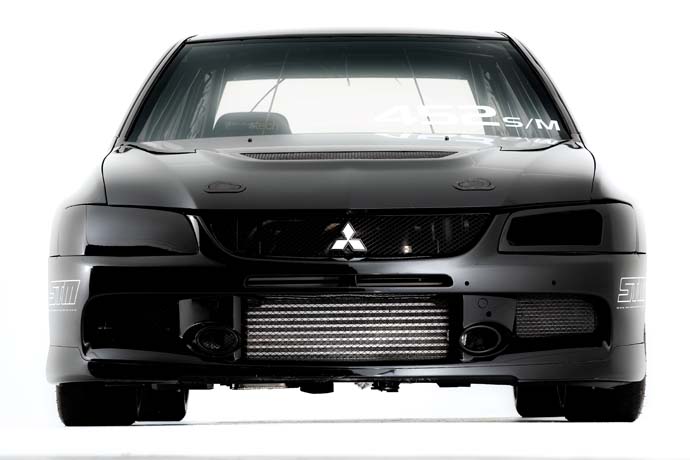 Just as I’m trying to extract the last dregs of caffeine from its cardboard vessel, the Speedtech Motorsport Hilux pulls into the parking lot, race trailer in tow. It’s the Friday before the V 4&Rotary Nationals weekend, and we have but a few hours to get Project DS9, the vicious, 1000-horsepower Mitsubishi Lancer Evolution IX, into the studio, shot, and to the show halls in Greenlane. 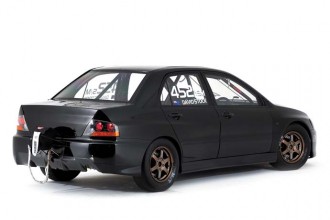 As we open the trailer to reveal a finely shaped Mitsubishi rump, complete with parachute hanging off the back, I suddenly realise we’re about to piss off a lot of people. With the super-tight diffs in the Evo, there is no way we can push it into the studio — it has to be driven. Andre Simon, proprietor of STM, slips into the driver’s seat and primes the fuel system. The whir of twin SX fuel pumps gives way to five or six chugs as the 2.2-litre 4G63 motor slowly turns over, trying to catch a spark. And then, at around 7.40am in the middle of Grey Lynn, central Auckland, DS9 fires up. 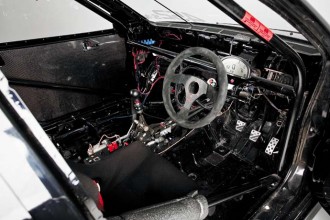 Curtains part and bleary eyes narrow as the residents look down on the rowdy, lurching Evo as it heads through the studio doors. The four-inch exhaust dump fills the air with the sickly smell of burnt Q16 race gas as the Mitsi’s idle begins to even out. These are the smells, sights and noises that make you very much aware you are in the presence of serious power.

When owner and driver Dave Stock first bought the car 18 months ago, he knew exactly what he wanted to achieve with it, and just how far he would go to get it. He had previously been driving an Evo VIII, which STM had built into a 10-second street car.

“It was an awesome car to drive, but I eventually realised it was a bit much for a daily driver — especially if I wanted to take it further,” explains Dave. “I had the later model Evolution [Evo IV to X] drag record in my sights, which was held by American company AMS, with a 8.422 at 271kph. So instead of reworking the Evo VIII street car, I bought an Evo IX with the sole intent of building it into the world’s fastest late-model Evolution.” That’s setting your sights high…

Once the guys at STM had both Mitsubishis in the workshop, they set about swapping over the engine setups so work could begin on the drag car, and Dave would once again have a daily driver.

Months were spent turning the stock Evo IX into a world-beating machine, and thanks to STM’s wealth of experience with fast Mitsubishis, the car was looking good to roll straight off the trailer and into the record books. 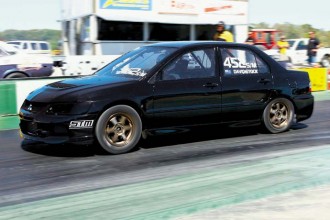 “We learnt a lot from my Evo II, DOCILE,” says Andre Simon of his own drag car, itself one of the world’s fastest Evos. “When we built that car we were always focusing on outright power, but with DS9 we wanted to focus on actually making sure the power got to the ground, and that we could rely on the drivetrain to take the strain.”

That said, DS9 is no slouch in the power department, either, making 1001hp at the wheels during its last tune. This is thanks to the huge Garrett GT45 turbocharger, a whole tonne of supporting equipment and some seriously trick engineering from in-house expert Bam Blaikie, who has spent a good proportion of his summer working on the car.

Although it took a few runs for Dave to get used to the new setup, once he did, the times started to tumble. “Once you get used to it, it’s not that much different from playing a PlayStation game,” he says. “With the ghost-shifting dog box arrangement the boys built for me, the only time I use the clutch is on the start line. The rest of the time it’s foot flat, press a button on the steering wheel to change gears, and another button to pull the chute at the end — simple.” 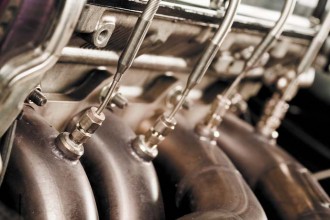 Times fell all summer, through the nines and then into the eights. As the AMS record loomed the buzz began to hit the internet, and soon Mitsi enthusiasts around the world were talking about Dave, STM and the car. Finally, during the last round of the Masterton Motorplex drags, the angry black machine slipped across the line with a 8.42 @ 269kph, narrowly claiming the record.

You have to wonder what previous holder AMS thought of it all. “We actually sent them a few emails, press releases and things like that,” says Andre. “We have always had good relationships with our competitors in the past, but we’ve never heard anything back from AMS. Apparently, they are going to bring the car back out of retirement in the upcoming US season to take the record back off us, though.”

From what we can tell, that should suit Dave and the STM team just fine — there is a whole lot more in DS9’s setup.

“This season we were limited by the small tyres needed to run in Sport Mod class,” says Andre. “Next season we will most likely make the move to Pro Import, which means we are able to run bigger tyres, giving us more traction to support more power. We should be able to achieve an easy 1200hp at the wheels whilst still running on Q16 gas.” Sounds to us like a seven-second pass is looming for Project DS9.

New Zealand has a proud, if short, tradition of building fast import drag cars, and workshops like STM are riding the crest of that wave. AMS is likely to take back the record, but I’ll be looking forward to the start of our next race season, and imagining the looks on the faces of AMS’s team members once they lose it all over again. It’ll sure beat the looks I’m still receiving from NZPC’s neighbours every time I walk out of the office to get my lunch. 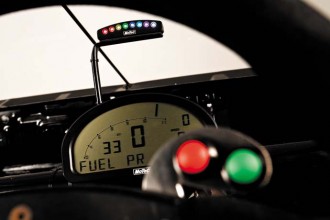 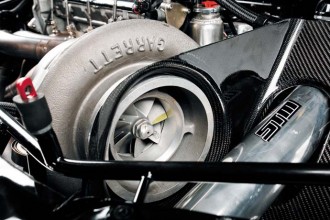