When you buy a cool car from your brother, what option do you have other than to make it even cooler? 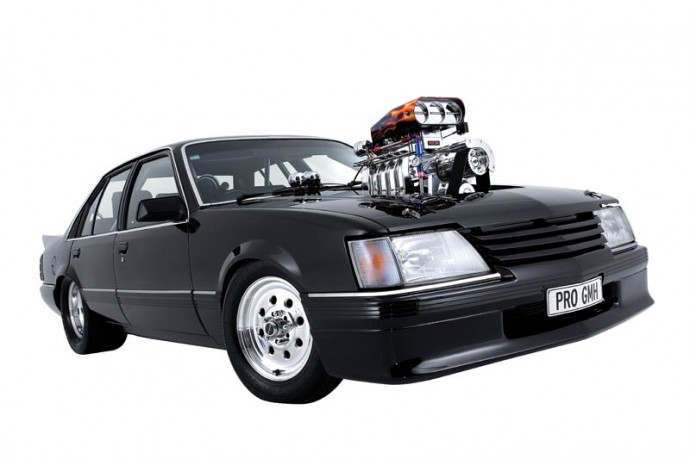 As a young and impressionable teenager, Adam Browne was dropped off at school by his older brother Cory in a tough VH Commodore. No doubt the big skids done up the street outside impressed Adam, along with the other kids, although the principal may not have thought it was as cool as the younger generation did. Over the following 10 years Cory modified the car into a tough pro street-style cruiser with mini tubs, a blown motor and the right stance.

Looking to follow in big brother’s footsteps once out of school, Adam purchased a VK Group A replica. In 2003 he was just about to give the VK a rebuild, when Cory offered him the chance to buy the VH instead. A lot of the hard work had already been done and the price was right, so the deal was sealed and the car became Adam’s. Though it had a supercharged motor in it when Cory owned it, the blower didn’t come as part of the package, and the reason for the sale was that the engine was stuffed.

First off, Adam decided to get it running with a naturally aspirated 308ci. “It went pretty well and made about 430hp, but I wanted more,” says the power-hungry Adam when asked what spurred on the full engine build.

“Cory still had the supercharger and the pulleys, so I bought those off him. Next step was to get a VN SS (304ci) block and crank. I ordered some custom-made pistons, some steel rods and a Kelford cam. I went for a set of Dash-9 Yella Terra alloy heads, and I wanted something different, something taller than a Max Wedge intake, so I purchased a Come Racing intake without the throttle bodies and gave it to Al’s Blower Drives; he did a great job of making it all work.”

With the custom tall supercharger intake manifold completed, the boxes of parts were dropped to The Cylinder Head Shop to be assembled into a working motor. With ARP studs, Clevite bearings and a whole lot of hard work, the engine was ready to run. Atop it was now the 4/71 supercharger that had come from Cory, and above that now sat a Demon 775cfm carburettor.

The engine was picked up on Christmas Eve 2008, which left Adam just two and a half weeks to get it installed and running in time for the Kumeu Car Show. Thanks to friend Roger Kay and plenty of late nights and long days over the festive season, the car made it to Kumeu, the first time it had been out in public for many years.

Although the car was running, Adam was unhappy with a lot of things, and it would be almost another year before the car was deemed complete, and it returned to the Kumeu Car Show just weeks before this magazine hit the shelves. Why so long between appearances? Quite simply, Adam is a perfectionist. While many people would have been delighted to have the VH in the garage as it was, it was Adam’s dream to own a perfectly finished Pro Streeter, and that’s what he’s now got.

The 4/71 supercharger is smaller than what is often seen in NZV8, but was considered perfect for the car’s comparatively small capacity by Al Shadwick at Al’s Blower Drives, and if the guy who works on superchargers all day long says it’s perfect, we aren’t about to disagree.

With a 1:1 ratio the car creates between 500 and 600 ponies, which is more than enough for a street car. But despite that grunt, Adam has no plans to race the Commodore. “I’d go and find an old race car if I was going to do that,” he reasons. “This is far too nice to stick into the barrier.” He’s right, the car is faultless.

No matter where you look, be it the engine bay, interior or exterior, the finish is perfect. It’s hard to believe the upholstery is stock standard. But with a six-point roll cage, RCI harnesses and a stack of Auto Meter gauges, the rest of the interior is most certainly not. As far as the exterior goes, various bits scream for your attention, such as the obvious blower sticking way out of the bonnet, and the not-so-0obvious fitment of VK Group A bumpers and side trims, along with VK Calais lights both front and rear. Only the real Commodore enthusiasts will notice the car is not actually a VK at all, the giveaway being the rear quarter windows.

The custom stainless rear wing that Adam’s dad knocked up is not only a superb piece of work, but a sign Browne Sr doesn’t disapprove as much of the car as he did when it originally entered the family 18 years ago. “At the time, my parents thought Corey was stupid for hacking up such a tidy car, but now they are into it,” Adam says.

Other changes Adam has made since taking ownership of the vehicle are the fuel system and exhaust. Cory originally fitted a custom drop tank, however, Adam removed it to allow the exhausts room to come out the rear. The tank is now a plastic fuel cell, and a host of Dash-10 braided lines feed fuel to the engine via a Barry Grant pump.

If It Ain’t Broke Two areas of the car that haven’t changed during Adam’s ownership are the wheels and rear tubs. The 15×5 and 15×10-inch Cragar Superlite II rims the car is rolling on were part of the appeal when the Commy was first offered to Adam. Making them fit was the job of Diffs R Us, which shortened a nine-inch diff and modified the wheel tubs as much as possible without requiring removal of the rear seats. A custom four-link now holds the diff in place and is kept in check by coil-over shocks, as is the front end.

There is no denying Adam has created exactly what he set out to achieve with the car, and he’s quick to acknowledge that none of it would have happened were it not for Cory’s help. Although it started with a decent base, everyone agrees that the car now looks better and goes better than it ever has. And that’s exactly what Adam dreamed about all those years ago when his big brother had the coolest car around.