Lloyd Williams: The Most Successful Owner In Melbourne Cup History

There have been a number of successful owners to have had numerous horses salute at the Melbourne Cup, but none more so than Lloyd Williams. The Melbourne-based businessman has had horses win the Cup on what is comfortably a record-breaking seven occasions - so just who really is Lloyd Williams? 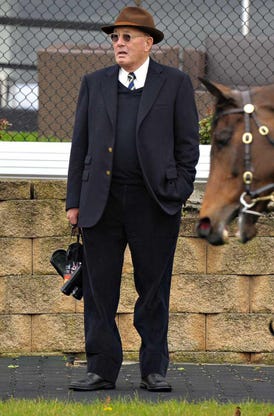 Lloyd Williams’ professional background isn’t in the racing industry. He was, in fact, a property developer, and he initially began to accumulate his wealth by developing apartments throughout Melbourne. In 1994, he was responsible for founding the Crown Casino and Entertainment Complex, which has since developed into one of the largest casinos in the world. However, he was only involved in the organisation for a handful of years, selling the majority of his shares to various entities which were involved with the famous Packer family in 1999.

Throughout his professional career, however, his interests were not limited to commercial ones. Indeed, well before he famously founded Crown Casino, Williams had demonstrated a significant interest in the racing industry, and had already begun what would ultimately turn into a hugely successful secondary career.

The wealth which Williams accumulated through his work enabled him to invest in the racing industry, a significant interest of his, as an owner, and he did so to great success. In 1981, his horse Just A Dash lived up to its name by racing away to victory, giving Williams his first taste of success at the Melbourne Cup at the age of 41. Four years later he would repeat the dose, with What A Nuisance taking out the 1985 incarnation of the event, and at this stage it appeared clear that he was at the beginning of what would be a long and illustrious career in the racing industry.

Despite continually growing his involvement in racing, however, and boasting numerous runners in the Cup over the coming years, he couldn’t add to his two victories over the next two decades. Finally the streak was broken in 2007 when Efficient won, but at this stage Williams was 67 and still a win short of the record four wins which numerous owners have managed.

That win, however, kick-started an incredible run which saw the horses he owned win more races in the space of 13 years than any other owner has managed in history. That 2007 win was followed up by a 2012 win by Green Moon, back-to-back victories by Almandin and Rekindling in 2016 and 2017, and finally, Twilight Payment last year.

In recent years, Williams has gradually been passing on his participation in horse racing to his son Nick, with whom he co-owned Twilight Payment in 2020. However, his involvement in the industry is still significant, with Williams owning a 300-acre stable just outside of his hometown of Melbourne.

At 81 years of age, it appears clear that the racing mogul’s direct participation in horse racing is winding down, with his son Nick - already owner of multiple Cup winners - following in his father’s footsteps and assuming many of the roles for which Lloyd has been responsible for so many years. However, you don’t need to be directly involved in order to be a Melbourne Cup winning owner, which means that even at his advanced age, the more senior Williams is still more than capable of extending his lead as the most successful owner in Melbourne Cup history