When a horror picture is perceptive and specific enough in character and story, it holds the power to remain wholly involving even if it were to be stripped of the very elements that distinctly make it a work of said genre. If a filmmaker can achieve this, his or her job is practically complete. Such is the case with Aussie writer-director Jennifer Kent and her mesmerizing, disquieting, unexpected debut feature, "The Babadook," a film that, like 1973's "The Exorcist," seems to have arrived fully formed as an instant classic. Kent has devised a teeth-chattering, armrest-clenching premise (based on her 2005 short titled "Monster") and then shaped it into something altogether deeper, a surprising, devastating metaphor for the difficulty of loss, the struggles of parenthood, and a key something else best not to be revealed. 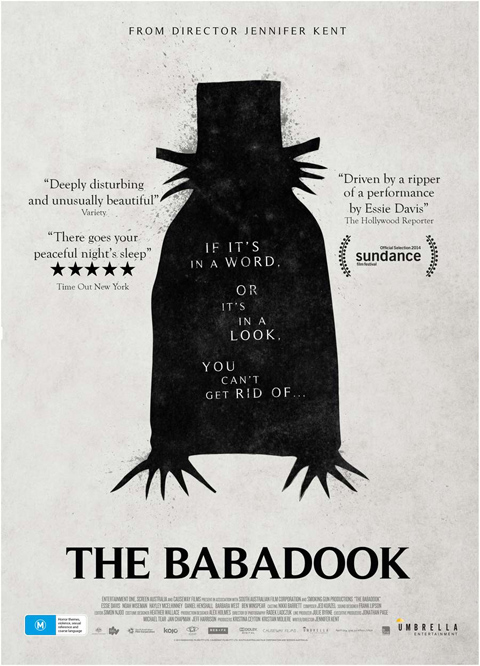 Things rarely work out exactly as one imagines them, an oftentimes bitter truth with which Amelia (Essie Davis) is painfully familiar. On the way to the hospital to deliver their first child, she and her husband were involved in an auto accident that left her a widowed mother on the same night their son came into the world. Nearly seven years later, Amelia is publicly keeping up appearances—she works as an attendant at a nursing home, where she has befriended considerate co-worker Robbie (Daniel Henshall)—but still tortured mightily by a grief that has never subsided. Son Samuel (Noah Wiseman) is not making things easier for her. Suffering from behavioral problems that eventually get him kicked out of school, he can be sweet and loving one moment, and disobedient and violent the next. Amelia is trying to do the best she can, but she is wounded in a different way and physical interaction with Samuel only serves to remind her of the person who should be here going through this existence with her.

One night before bed, Samuel pulls a strange pop-up book off the shelf for his mom to read to him. Its name is "Mister Babadook," and what quickly becomes clear is that this is no typical children's fable with a happy ending. A top-hat-wearing fiend with claws and wild hair, he is the monster in the closet and everywhere else, one who hides his awful true disguise underneath his already-unsettling persona. Amelia tries to reassure her terrified son that Mister Babadook is fantasy, but Samuel is convinced he is very real and out to get them. Increasingly exhausted and out of sorts from Samuel keeping her awake at night, she rips up the book and throws it away. When it reappears on their doorstep meticulously taped back together, she has no choice but to confront the possibility that they have been cursed by something far more otherworldly than simple bad luck.

"The Babadook" wades into courageously dark territory, its chilling subject matter coming from two separate places—the threat of the seemingly unstoppable storybook creature who has latched itself onto Amelia and Samuel, as well as the ongoing trials of a woman desperately trying to retain control within a life spiraling into the abyss. Jennifer Kent keeps her focus on these two troubled but sympathetic lead characters, their insular day-to-day lives fodder for a more comprehensive canvas where monstrosities exist in countless forms beyond the supernatural. Amelia feels as if she has no one to help her or to understand what she is going through—her uppity yuppie sister, Claire (Hayley McElhinney), has begun to distance herself and little daughter Ruby (Chloe Hurn) from them, believing Samuel to be a negative, even dangerous, influence—and as she is faced with a mounting barrage of terrifying, inexplicable occurrences, she retreats all the further from outside contacts. Were a boogeyman sprung from the pages of a mysterious book not enough to handle, child protective services have also begun to make regular unannounced visits. Samuel, however, isn't the only one who could use some protection.

In a performance of heartrending transcendence and ferocious abandon, Essie Davis (2008's "Australia") is nothing short of phenomenal as the damaged, put-upon Amelia. This is no typical horror-movie heroine who screams, looks scared and kicks butt on command, but a role of both complicated, multilayered dimension and intentional ambiguity. The viewer comes to understand how difficult it must be to care for someone as needy as Samuel, just as one also grows to care for Samuel despite how maddening and frustrating he can be. By seeing both sides and acknowledging the vast gray area in between, Kent fearlessly personifies mother and son's turmoil and uncertainty in a title figure whose spectral presence envelops them. As Samuel, newcomer Noah Wiseman is so astonishingly natural the mere thought that the young actor might not be exactly like his character is inconceivable. This is easily one of the most realistic and demanding screen depictions of a child in quite some time, and Wiseman's unaffected turn is bereft of any hint of artifice.

"The Babadook" captures with shuddering frankness the feeling of the world hopelessly crashing down upon oneself. Without the throughline of Amelia and Samuel's personal journey, this would be a predictably feeble scare machine that, chances are, wouldn't be so scary. By concentrating on them and the psychological complexity of their ordeal, the introduction of Mister Babadook as a villainous emblem of doomed portent holds a greater impact. Thus, Jennifer Kent's film is one of solitude and bereavement, but also of skillfully woven streaks of unadulterated terror. The visual conception of the storybook itself is worth applauding, its illustrations (credited to Alex Juhasz) and foreboding prose ("If it's in a word or it's in a look, you can't get rid of the Babadook") a nightmare in and of themselves. Kent aims to frighten not with cheap false alarms, but via the sophisticated, expert building of suspense and malevolence within the unknown. Cinematographer Radek Ladczuk's exceptional use of shadow ensures that what isn't seen is as anxiety-riddled as what is, while the creative design of the book and the look and sound of the phantom outdo themselves in wicked inspiration. The more one ponders the meticulous details and subtle breadcrumbs dropped throughout "The Babadook," the more provocative and devilishly clever it appears. Urgent yet compassionate, unyielding as well as frostily whimsical, the film transforms again and again as it cackles in the face of expectations.