“Never give in, never give in, never, never, never, never- in nothing, great or small, large or petty - never give in.” (Churchill, October 1941, Harrow) If only someone involved in making this film had listened to these words of the eponymous character! Jonathan Teplitzsky’s “Churchill” had some of the most famous oratory to draw on, and yet, it gives in and substitutes Churchill’s BBC broadcast with some tepid lines written by a second-rate historian.  Screenwriter Alex von Tunzelmann has a lot to answer for. Not only are liberties taken with Churchill’s words, liberties are taken with the facts. Nothing is sacrosanct: the marriage, Churchill’s attitude to Operation Overlord, the speeches, the pretty young secretary. 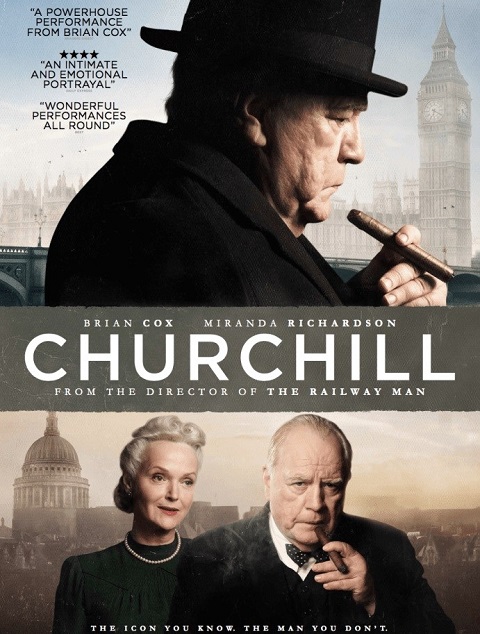 Sure, Churchill (Brian Cox) and his wife, Clementine, (Miranda Richardson) were products of the age in which they lived, and they did not invest in Public Displays of Affection, but that does not mean that they had a troubled marriage, as the movie submits was the case. Brian Cox is brilliant at portraying a cantankerous, defiant figure but the script prevents him from revealing Churchill’s famed wit, instead suggesting that much of the dialogue that Churchill delivered in everyday conversation, was pre-scripted by himself. The problem is that at some stage some school children will be shown this film to make the historical character of Churchill come alive and these children will believe everything that they see on screen. BOOM! History is once again rewritten by the movies! ‘Saving Private Ryan’, for instance, depicted Normandy landings by US troops, cutting out any mention of British or Allied troops.  In a recent study conducted by Washington University in St Louis, it calls historical films a 'double-edged sword' since they help teachers bring history to life but at the price of veracity.

It’s commonly agreed amongst biographers and historians that Churchill did not initially support Operation Overlord, and it’s also accurate that he was prone to wildly brainstorm other options for ending the war, to the ‘brass’. However, by the time that the D Day landing was mere days away, Churchill was fully behind them. To write a scene in which he blusters before God, on the night before the invasion, to divinely intervene and send rain and storms to prevent Overlord, is preposterous. The dialogue is creaky, and melodramatic, and reminiscent of a parody of Shakespeare: “Let loose flashes, let thunder crack and roll and roar.” Oh, please … as if Churchill would be praying for this to happen; and in this fly-blown prose! Not even Cox’s fine delivery can save this film from perdition.

Bright notes were the accuracy of the costume, hair and make-up – but even this begs the question. If this can be delivered with such faithful accuracy, why not everything else in the film? The settings and props chosen were apt and felt authentic to the era. However, there was far too much time given to forcing the audience to witness cars arriving, and car doors opening, and car doors closing and cars driving off; and staring at maps, and out of windows, and out to sea, and across the beach. We get it! We’re not dumb, we moviegoers. We realise that the weight of leading the nation through a war weighs heavy on the shoulders of the Prime Minister. But each lengthy shot adds to the running time making the film feel tedious. The cinematography, too, conjures up a weird mix of responses. It often utilises light beautifully, carefully composes the mise en scene (especially in the Long Shot) and seems to announce that something momentous is about to occur. And then there’s an immense sense of anti-climax when nothing dramatic occurs. So, it’s a little like dressing a homeless woman in a couture gown – there’s a beautiful gown to admire, but it’s incongruous in how it’s being utilised.

The supporting cast, Eisenhower (John Slattery of ‘Mad Men’ fame), King George (James Purefoy) and others, do an adequate job. But the film itself is not adequate – it serves neither as entertainment, nor as a biopic. Sadly, I cannot recommend this movie, which is not what I thought I’d be saying, as I am rather fond of Churchill and I was also rather looking forward to this film.