Danny Boyle might just be one of the most unpredictable filmmakers of the modern era, a director specializing in diversity over stasis whose every film is nothing, really, like the ones which have come before it. Within little more than the last decade, an apocalyptic zombie movie (2003's "28 Days Later") was followed by an innovative family fable (2005's "Millions"), then an outer space-set sci-fi/thriller (2007's "Sunshine"). Next up were Boyle's two Oscar-nominated features, 2008's part-whimsical, part-manipulative romantic drama "Slumdog Millionaire" and 2010's harrowing true-life tale of survival "127 Hours." His latest film, "Trance," could be his most rapturously oddball yet satisfying piece of work yet, an uncommonly strange and resplendent ode to David Lynch, British crime sagas, the French New Wave, and spirit-soaring love stories. At once ethereal and daunting, a tantalizing puzzler seamlessly weaving layers of subconscious memory and literal hypnotic fantasy with that of bitter truths folding in on themselves, the film traverses so many genres and emotional territory in the span of only 101 minutes that it's difficult to bring justice to just how enormously special and rare and one-of-a-kind it is. Experiencing it only once is guaranteed to not be nearly enough. 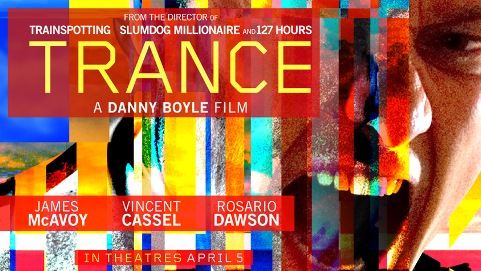 Simon Newton (James McAvoy) is a London art auctioneer secretly in cahoots with career thief Franck (Vincent Cassel) to steal Francisco Goya's 1798 painting "Witches in the Air," worth over $30-million. When the heist goes awry and a double-cross leads to the artwork disappearing and an injured Simon losing his memory, hypnotherapist Elizabeth (Rosario Dawson) is hired to help him remember where he hid the Goya. The more Simon is put under, however, the more his dreams and states of hypnosis begin to blur with reality, identities, alliances and motives shuffling between himself, Franck and Elizabeth. When all is said and done, the whereabouts of the artwork will be disclosed, but it may come at the cost of Simon making some dark, deep-seated discoveries about himself in the process.

Irreverent and disturbing, blisteringly innovative and shockingly sweet, "Trance" bulldozes its way through all conventional expectations to present a new brand of cinema existing somewhere between neo-noir and neo-ecstasy. Written by John Hodge (2000's "The Beach") and Joe Ahearne, the corkscrew narrative reinvents itself every few minutes as the mesmerizingly rhythmic editing by Jon Harris (2012's "The Woman in Black") continues to move and groove to the rousingly anthemic music score courtesy of composer Rick Smith (2006's "Breaking and Entering"). It is a film where nothing should be taken for granted, where supposed good guys might be shadier than originally presumed and vice versa, where judging a person's character isn't as black and white as the movies frequently present it, where inner complexity melds with the decisions they make and the war it causes inside them. Just when one thinks he or she has a firm hold on one of the central human figures—that would be Simon, Franck, and Elizabeth—think again. The same might be said for the blurring between the unreal and waking life, arousing sexuality and sudden bursts of harsh violence intermingling with the lush beauty of architecture, the solitude of an idyllic French countryside, and the continued drive for Simon to clear his mind and figure out who he is. All of the above plays out like a kaleidoscopic orchestra in filmic form.

James McAvoy (2011's "X-Men: First Class") is a beguiling, magnetic, dewey-eyed Simon, forthrightly narrating the film at the onset. A driving force of the plot who suddenly loses his way, the places that McAvoy and director Danny Boyle take the character are impossible to anticipate, and all the more thrilling because of it. More surprising is the enticingly rough-and-tumble Vincent Cassel (2011's "A Dangerous Method"), his Franck taking just as many unforeseen curves. Cassel, usually tasked to play the resident "heavy," begins this way here before Boyle subverts expectations in startling ways that singlehandedly reinvent the actor as a veritable romantic foil. Possibly best of all is Rosario Dawson (2012's "10 Years"), seldom given the chance and responsibility to take on a character with the amount of layers as hypnotherapist Elizabeth. Drawn between the two men and into Simon's altered state while struggling to maintain her own individuality, Dawson achieves something immensely difficult by making wholly believable a cavalcade of outlandish situations that flirt with the line between what is and isn't real.

Right down to Elizabeth's funhouse-colored mod apartment and glowing orange-plated bathroom, the cinematography by Anthony Dod Mantle (2009's "Antichrist") is outright astonishing while speaking volumes about who she is and what she's concealing. It's the perfect example of the difference between an empty technical exercise and one that's flashy yet meaningful, a showcase for artistry in offbeat storytelling but also for characters who leap off the page and give an audience a reason to care. As stylish as the film is, it is also ultimately heartfelt and comforting, a molding of the bitter and sweet further signified by Emeli Sandé's and Rick Smith's transcendent song, "Here It Comes," in the final note-perfect moments. "Trance" plays fair in its psychology while suggesting that the human condition is never one neatly packaged commodity, but a variety of good and bad decisions, positive and negative traits, necessary and insightful experiences that make each person and their journey who they are. "Breathtaking" is an adjective that should be used sparingly when discussing film, lest the word begin to lose its rightful weight and inference. "Trance" is just that, and then so much more.