A political allegory, a home-invasion thriller, and a complicated depiction of humanistic urges both honorable and animal, "The Purge" finds varying degrees of success as a genre film, but fortunately makes up for its downfalls as a compelling conversation starter. The directing debut of James DeMonaco (screenwriter of 2005's "Assault on Precinct 13"), pic is tight and taut at a no-nonsense 85 minutes, lulling the viewer into its radical but somehow plausible vision of the near-future before the hellish title event breaks loose. There are contrivances on its way to a rather cool capper, but that's okay when there are so many underlying ideas at play. First and foremost, "The Purge" prides itself on exploring the act of violence rather than wallowing in death and bloodshed just for the sake of it. 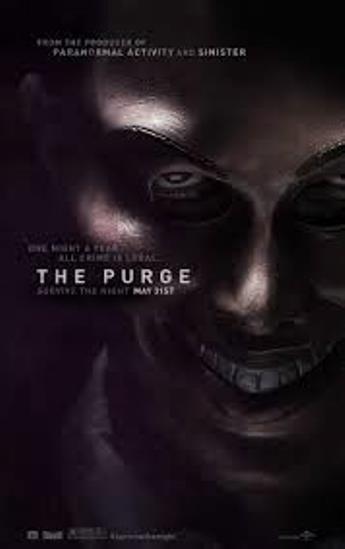 In 2022 America, unemployment is at a mere 1%, crime is at an all-time low, and education is on the rise, all of the above, at least in part, a byproduct of a new government-sanctioned holiday known as "The Annual Purge." For twelve hours over the course of a single night—March 21-22, from 7:00 p.m. to 7:00 a.m.—all emergency services are suspended and murder is perfectly legal, allowing anyone the chance to get out their frustrations and do away with anyone they wish. For security systems owner James Sandin (Ethan Hawke), his livelihood has thrived and excelled because of the purge. As the yearly night in question gets underway, he puts his home in lockdown and settles in for a quiet evening with wife Mary (Lena Headey) and teenage children Zoey (Adelaide Kane) and Charlie (Max Burkholder). What James doesn't expect is for (1) Zoey's older 18-year-old boyfriend Henry (Tony Oller) to be on the premises, ready to make him pay for forbidding his daughter to see him, and for (2) Charlie to disarm the security system long enough to let a begging, bloodied stranger (Edwin Hodge) into the house. Things quickly deteriorate from there, with a group of masked purgers (led by the frighteningly debonair Rhys Wakefield) showing up at the front door, guns and knives in hand, threatening to kill the entire family unless they give up their surprise guest.

The general conceit behind "The Purge" is a real humdinger, worthy of debate. Sure, it sounds crazy to allow free-for-all violence one night out of the year, but could it have the potential to solve many of the country's criminal and socioeconomic problems the other 364 days? And, if murder was allowed, would that really make it any more morally acceptable? As writer-director James DeMonaco threads these themes and questions through his narrative, he also aims to spook and leave one on edge. He achieves this for the most part, but even as he ratchets the stakes he seems almost hesitant to really go for the jugular. Unlike 2008's superior, unsparingly disturbing "The Strangers," which "The Purge" resembles quite a bit, there is a tendency to rely on a series of close calls and people being in the right place at the right time. Whereas there was no one to help the besieged Liv Tyler and Scott Speedman in "The Strangers," the family here is, quite literally, there for each other when the going gets tough and whether it makes complete sense or not.

Ethan Hawke (2012's "Sinister") and Lena Headey (2007's "300") lead the cast as married couple James and Mary, the former in command of the screen while indelibly personifying the everyman and the latter nice to see in a relatively sympathetic role for a change. They are joined by the solid, emotionally available Adelaide Kane, making her major film debut as Zoey, and Max Burkholder (2003's "Daddy Day Care"), a tad too closed-off to closely identify with as Charlie. The eye-catchers, though, are two particular supporting performances, the first from Rhys Wakefield (2011's "Sanctum"), chillingly maniacal as the smiling head villain, and the other from Arija Bareikis (2007's "No Reservations") as Mary's neighbor friend Grace, almost but not entirely able to shield her silent contempt for the Sandin's recent good financial fortunes.

As stimulating and introspective as "The Purge" dares to be, it leaves a lot left to be explored and discussed. There is only so much that can be delved into when a plot about an entire country is solely set inside a single house, so for that reason a sequel or companion piece doesn't sound like a terrible prospect. Whether as an introductory chapter or a stand-alone picture, the film doesn't take full advantage of its imaginative premise, but still stirs and unsettles when it counts. The concluding scenes are especially potent, a release of bottled-up tension as well as an austere comment on the choice between what's right, what's wrong, and the blurred line in between. The Sandins may be in a fight for survival, but if they live they are still going to have to look at themselves in the mirror with the dawning of a new day. No one's coming out the other side unscathed.

(for strong disturbing violence and some language).
Reviewed by Dustin Putman, June 7, 2013.