What director J.J. Abrams (2011's "Super 8") did back in 2009 was nothing short of a cinematic magic trick: he reinvented the flagging "Star Trek" film series by creating a "how-it-all-began" prologue that pleased die-hard Trekkies while earning a widespread mainstream audience that wouldn't know a Klingon from a Romulan. Moreover, its $257-million domestic gross was two-and-a-half times higher than the most success past film (1986's "Star Trek IV: The Voyage Home") and a full six times more than the last entry, 2002's "Star Trek: Nemesis." Not bad for a science-fiction property that began as a short-lived, three-season-and-done television series from 1966-1969. 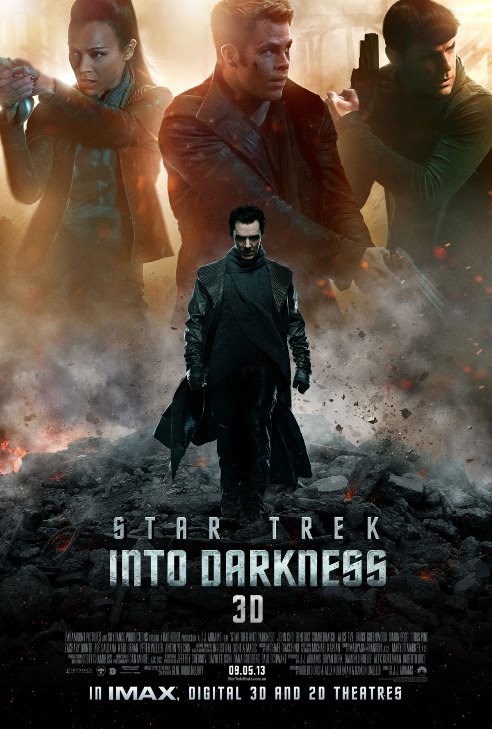 If Abrams' "Star Trek" was like a tasty appetizer that smartly set up the story and players, then much-anticipated follow-up "Star Trek Into Darkness" plays like a master chef's culinary main course, a breathtaking, seat-gripping extravaganza of near-endless scope, excitement, and personality. Expanding upon the groundwork already laid out, the picture effortlessly blends together an elegantly developed, tautly paced narrative, a cavalcade of action set-pieces that put the recent threadbare "Iron Man 3" to shame, and incisive character-oriented moments the likes of which are singlehandedly more vivid and dimensional than all six of the original "Star Trek" pictures combined. Further equipped with the most electrifying and spiteful villain the franchise has seen, ace technical credits worth oohing and ahhing over, and a cast who outact and, if possible, overshadow their former counterparts, and what we have here is the epitome of what a successful, all-cylinders-firing popcorn movie should be.

In an attempt to save Spock (Zachary Quinto) and the tribal natives of planet Nibiru from a would-be cataclysmic volcano eruption, Captain James T. Kirk (Chris Pine) puts the entire Starfleet—and potentially world—in danger by revealing the USS Enterprise (seen rising from its underwater hideout) to the alien beings. Just as Kirk prepares to face a demotion from Captain Christopher Pike (Bruce Greenwood) and a split from Spock, the Starfleet is attacked by one of their own, a ruthless agent gone rogue named John Harrison (Benedict Cumberbatch). Taking the life of someone near and dear to Kirk, Harrison flees for Klingon planet Kronos with a newly reinstated Kirk in hot pursuit. For the dedicated crew of the Starship Enterprise, they are about to face their most challenging, death-defying mission yet.

It took a good-sized four years to see a "Star Trek" continuation, but the wait was most definitely worth it, with director J.J. Abrams and screenwriters Roberto Orci & Alex Kurtzman (2012's "People Like Us") and Damon Lindelof (2012's "Prometheus") raising the stakes and building sensationally upon the scope and mythology of the franchise's landscape. For the first time, the viewer gets a thorough exploration of its settings, the Enterprise so vividly used in all its facets, right down to the bowels of the ship, that each showing might as well come with an architectural blueprint. Views of San Francisco and London, circa the 23rd century, are also magnified, with Abrams and his creative team going to impressively imaginative lengths to depict what the future's advancements might legitimately hold for Earth and its technology. Visual effects are nothing short of outstanding—what is and isn't CGI might as well be anyone's guess—while the cohesive, energized cinematography by Dan Mindel (2012's "John Carter") and comprehensive art direction and creature designs occupying the edges of the frame aid immeasurably in filling out the film's world.

What is most appreciative about "Star Trek Into Darkness," however, is just how efficiently it plays out, dizzying action coming at a clip rate without any skimping being done to the characters and their relationships. In a time when so many big-budget blockbusters seem to waste their money on overlong, overblown productions that sink under the weight of their own size while forgetting to pay off what people go to films like this for, here is one, like, for example, 1993's "Jurassic Park" before it, that is able to marry grandeur with feeling and wonder and a thrill ride with humanity and innovation. Thus, Uhura's (Zoë Saldana) strained romance with Spock effectively works in tandem with Kirk's friendship with Spock, both humans left frustrated by the half-Vulcan's resistance to emotion. Meanwhile, engineer Scotty (Simon Pegg) gets an upcharge in screen time, his dedication to his profession treated seriously as a key plot point and his character used as much more than just comic relief. And then there is villain John Harrison, a violent and cunning sociopath who nevertheless sort of has a right to be angry once the details of his past come to light. He is much more than a one-note baddie, that's for sure, and Benedict Cumberbatch (2011's "War Horse") is gloriously menacing and vindictive in the role.

As mentioned, action set-pieces wow again and again, arriving naturally out of the story's progression and metamorphosis. The opening sequence set on Nibiru gets things off to a radiant start. A sudden attack on Starfleet Headquarters is as brutal as it should be. Kirk's, Spock's and Uhura's dangerous trip to Kronos to seek out Harrison gives a memorable glimpse at Klingon planet Kronos. A journey across a debris-filled outer space as Kirk attempts to make his way from the Enterprise to General Marcus' (Peter Weller) spacecraft is full of expertly timed tension. All of this and a lot more is to be had before the film even reaches its climax. Without giving anything away, the best scenes were absolutely saved for last, positioning Spock and Kirk as heroes all the more brave because they are willing to risk their lives for what they know in their heart is right. Chris Pine (2012's "People Like Us") and Zachary Quinto (2011's "What's Your Number?") were already top-notch casting choices as James T. Kirk and Mister Spock, but here they are at total ease, giving added shades to their iconic characters that not even late creator Gene Roddenberry could have imagined. The same goes for Zoë Saldana (2010's "The Losers"), as spunky yet warm as ever as Uhura; Karl Urban (2011's "Priest"), amusing and charismatic as Bones; John Cho (2012's "Total Recall"), getting a chance to sub in Kirk's chair for a time as Sulu, and Simon Pegg (2011's "Mission: Impossible - Ghost Protocol"), as Scotty. New to the series, the lovely Alice Eve (2012's "The Raven") fits right in, adding welcome femme support as new scientist onboard Carol Marcus.

Happily inventive while remaining reverent to series lore, "Star Trek Into Darkness" lives up to its moniker, bolding going where no one has gone before. Indeed, strange new worlds are explored, new life and civilizations are sought, and all the while director J.J. Abrams digs down to find the intimacy and lifeblood (both red and green) of his ensemble of characters in a way no one quite has before. A rapturous experience that rarely, if ever, flags in interest and forward momentum, the picture all but makes its 2009 predecessor look like a low-budget indie and the earlier series installments seem like quaint student films in comparison. Giving all impending summer 2013 tentpoles a reason to be intimidated, "Star Trek Into Darkness" should safely reintroduce audiences to just how much fun moviegoing can be.