Who owns more shoes, hair and skin products, you or your wife? 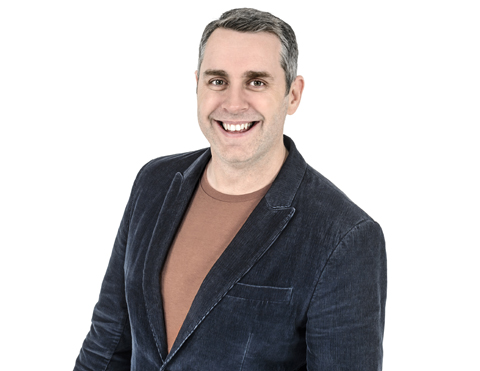 It's timely that you ask, because we actually did a count up of the shoes the other day and I do own more pairs of shoes.

I think we tie in the "product" department…I know. Where do I hand in my “Man Badge" right?

Now you have starred in the Daikon Heat Pump advert with Dan Carter, can we expect to see a half naked Jason advertising Jockey Underwear next?

Hahahaa! I think the only time I'll be asked to pose half naked in underwear will be for the before shot for a weight loss campaign.

What’s your most memorable performance from your time on ‘New Zealand’s Got Talent’?

There were so many, and it was such an incredible team to be a part of - but the one performance that still sticks in my memory is one that didn't actually make it to air! It was during a rehearsal and a group of extremely talented brothers were running through their song. They had keyboards, guitars, drums, the full set up PLUS their seeing eye dog. The boys were blind and were a massive crowd favourite. As they were belting through their song, their beautiful Labrador stood up and looked really unsettled. This had never happened before - and my co-host (Andrew Mulligan) and I were looking on from the side of stage wondering what had upset the dog - when suddenly the most horrific doggie diarrhoea exploded all over the stage – in front of the shocked in studio audience. The boys couldn’t see it obviously - so kept playing while the crowd gasped and laughed and I think some might have even screamed. It was then up to Andrew and I to go on stage to try and smooth the situation, while the amazing production crew had to run on with towels, wipes, anything they could find to try and clean the stage. As I was trying to talk - I was dry-retching. It's funny now - but for a long time I couldn't eat a mince pie!

As a self confessed ‘mummy’s boy’ what three words would your mum use to describe you?

Loyal, generous and favourite! I'm not sure, but I like to hope for at least two out of those three!

Now you’re a parent yourself what’s been the biggest change to your life?

My appreciation of time. There is never enough and what we do have goes so fast. I can sit and watch Max playing or rolling over or even just sitting watching me grinning with his gummy smile - and suddenly I'll look at the time and think "where did THOSE two hours go!?"

Having grown up in Hastings and now living in Auckland, are you a Blues or Chiefs supporter?

I'll ALWAYS be a fanatical Hawkes Bay Magpies supporter so given they're part of the Hurricanes catchment area - it's the 'Canes!

Have you ever been asked to belt out a song in mistaken identity?

Yes! And I have to say people, "Look - I'm actually NOT Ricky Martin".

Early morning wake ups are par for the course of a breakfast host, have you ever slept through your alarm and been late on air?

Not for a long time, but yes, it happened a couple of times when I first started hosting a breakfast show based in Hamilton a few years ago. My co-host had to call my house and needless to say, flatmates weren't overly impressed with the house phone ringing at 4.55am!

With a passion for travelling, do you take a backpack or suitcase?

Suitcase! And I always seem to come home with more than I left with!

Which three celebrities would you most like to be trapped in a lift with?

Halle Berry, Denise Richards and Eva Green. I know what you're thinking: "They're all beautiful women who look great in a bikini" - but that's not my train of thought. They've all been "Bond girls" so will surely have James Bond's phone number and he can come and get us out of the lift. And if it takes a little longer than we hope, I'm sure we'd all find something to talk about! Actually - I'd probably bore them with photos of my amazing wife and gorgeous son. Does that sound like damage control?

What does it mean to you to be a Kiwi?

It means the world to me. I'm lucky to have flown around our country a few times, and if ever you need reminding how beautiful it is, just look out the window as you fly over Taupo, or rolling farmland, or along a coastline or over the mountains into Queenstown.

It means cheering for anyone wearing a fern on their black and white sports gear and it means we know the true value of a burnt sausage on a BBQ at Christmas time and singing along with someone who can even remotely play a guitar.

Easy mistake I know! The only difference is he is a ruggedly handsome man - and I'm ... well ... not.

Jay tells a great story of how he intercepts my mail and keeps the cool stuff!
He's actually one of the nicest buggers you could hope to meet.