Get Frank Meets "Dean Hewison" From a Distance

When he’s not teaching audiences on How To Meet Girls From A Distance, Dean Hewison is involved with Live At Six: a techno-nightmare thriller with an element of audience participation; capturing the events of a television news anchor and submitting them to the “producers” of a television news network. What is fact? What is fiction? And how much of what we witness it subverted to what we see on YouTube or, even more worrying, our nightly news.

Get Frank had a few minutes with Dean to talk shop. 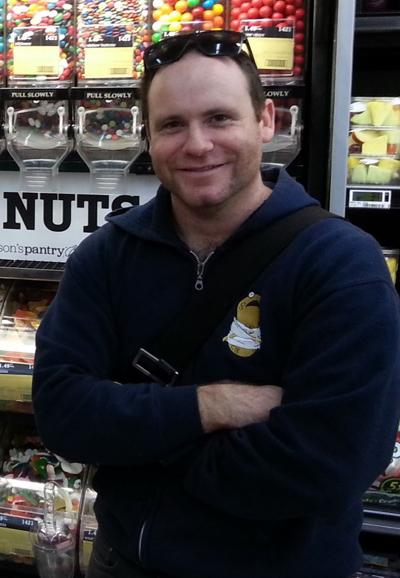 Hi Dean – how’s the weather in your parts?

Ever taken a “selfie” of yourself? Any tips for taking the perfect selfie?

I took one at the top of a huge mountain in South America to show to my daughter Nova, but otherwise I won’t go near a selfie unless I have a massive duckface on.

Are any of the following apps on your phone: Vine? Snapchat? Instagram?

I got Vine to see what the fuss was about, and have filmed one of them – my daughter and her friend playing a video game where they’re shooting zombies with plastic shotguns. I got them just as they screamed and died. I don’t have anyone apart from my fiancée Adrianne to show my junk to, so Snapchat has no appeal yet. Instagram is sitting there waiting to be used. I tend to eat my food before I take photos of it though.

There are a lot more ways these days for anyone/everyone to take videos wherever they are – is this a good thing or a bad thing in your mind?

It’s great for our show! People having access to filming videos on-the-spot totally changed our play between the first and second seasons. We got rid of the ‘villain’ and made everyone with a smartphone (and the Internet itself) the baddie. In the wider context – I generally think it’s a good thing. I like that people can catch moments and document happenings that they may not have been able to before. I think that the positive benefits of this tends to outweigh the negative (of which I don’t deny there are many).

Live At Six deals with an (apparent) video of a news anchor misbehaving goes viral - given the many example of viral videos making/breaking lives, did you draw influence from any high-profile cases of videos that have jeopardized a career?

We were very “inspired” in the first season by the Tony Veitch drama – not that there was any video footage, more along the lines of how it was spun. In the latest season, the Queenstown bouncer footage gets a mention… that guy is one of a kind. As is Justin Bieber pissing in a bucket, though nothing like that made it in.

The Veitch saga happened in the early days of us creating this play, and it was fascinating to see how it was reported by the different networks. This was pretty important to Leon and I in the genesis of the play. 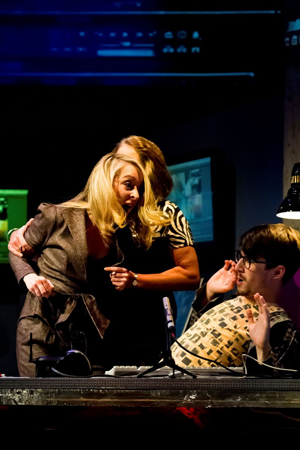 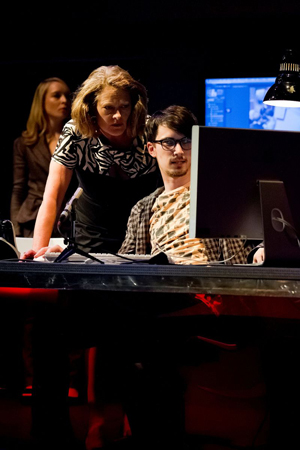 The production was penned before the advent of Charlie Brooker’s Black Mirror – have you seen the episode regarding the lurid, voyeuristic nature of the public given their access to new technology (and involving the prime minister and a pig)?

Yes and it was absolutely stunning. That episode in particular was a masterclass of tone – how to balance dark humour with absurdity and a nod at realism. Still my favourite, actually, because it wasn’t afraid to just go there. 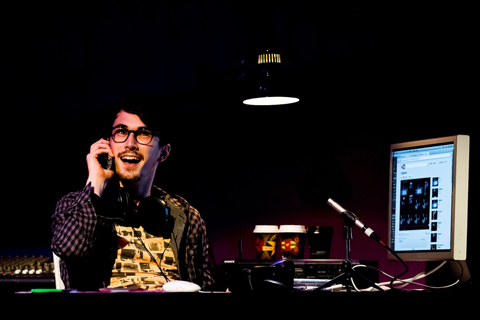 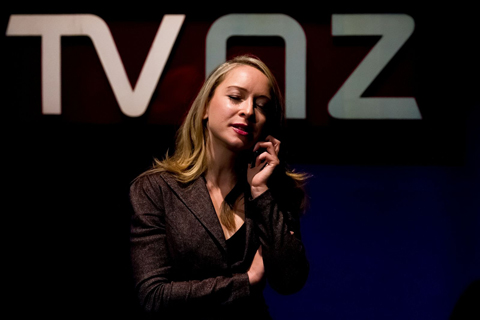 The show itself asks audiences to document their evening through the use of smart-phones; is this tapping into the voyeuristic nature of people in the 21st century?

It’s making the most of what we have available! This show depends on footage of the “incident”, and if such a thing was to happen at a media awards party, you know there’d be dozens of smartphones capturing the moment a career died. So all we’re asking is that our audience does the same! News is changing; both stations are requesting user footage and playing it as though it’s a way for them to team up and work with their audience  - not a way to get some free video.

You also wrote and directed How To Meet Girls From A Distance – perhaps a lighter side of voyeurism (if there is one). Is this a theme you’re interested in exploring or a coincidence?

It’s kind of a coincidence because voyeurism popped up in Live at Six once we introduced the smartphone angle. For Leon and I though, Live at Six is more about the manipulation of the facts to suit an agenda, and showing an instance of how horribly wrong that can go when characters are backed into a corner looking for a way to get out with their reputations intact.

Another aspect of the play is the battle for ratings between two rival networks and their news programmes; do you find the news more sensational now than say during the 90s?

I do – primarily because the advances in technology have meant that the footage that news can access has leapt ahead. Back in the day, you had your news bulletins and your “Hard Copy”-style sensationalist shows. These days with footage coming in from viewers, youtube… everywhere, it is getting harder and harder to tell the difference…! I love that we have two main news networks battling each other though – it makes for some really fun satire about how they really feel about each other. Journos in particular have really enjoyed us skewering them.

Is this sensationalism an attempt to gather ratings or is it a case that we’ve a greater sense of what is going on in the world and this is clearly what is actually happening.

As much as I’d like to pretend it’s the latter, I think we’d be foolish to overlook how important ratings have become in how we are delivered our “news”. New Zealand is still in a very good place comparitively – America shows us how far the extremes can go! But yes, I think that the closure of TVNZ6 and TVNZ7 (which were both content over commercial) and their replacements being “+1” repeat programming proves that in the present television landscape, ratings are far more important than content. 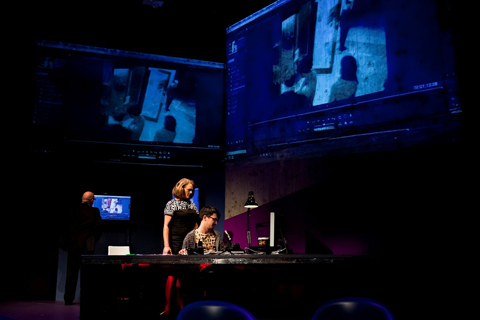 We’re making this all sound rather dark – there are obviously some humour points during the production.

Absolutely. It’s a satire and it’s not meant to be taken seriously. The show itself is hilarious. But all that aside, we want the audience to leave with the idea that they should perhaps take their news with a grain of salt – all is not necessarily how they say it is.

Have audiences been receptive with their interaction of the show? If so, has there been one particular centre in New Zealand which have displayed the most interaction?

Wellington really embraced the Twitter aspect of the show – using #liveatsix to talk about what’s going on and how they’re reacting. We encourage people to use their phones during the show to tweet, vine, etc – it’s not fair for us to rely on those to enrich the show and not let people follow through. We’re really hoping for a lot of Auckland interaction though, both online and in the pre-show smartphone action!

Final question – what can I do if I don’t have a smartphone? Will I be missing out?

Not at all. The pre-show stuff is going to be filmed by some people whether you have a smartphone or not, so if you don’t have one, it’s still fun for you to see the face of the nation planting her face on the floor next to your feet. Then you get to go into the theatre and watch what you’ve just seen be recontextualised by people with agendas you’re not normally privy to.

Thanks for your answers!

Thanks for your questions! Gotta say, these have been the most considered and astute questions I’ve been asked about Live at Six in 4 years. Each one got me sweating! Thanks heaps for getting involved.

To check out the trailer for LIVE AT SIX click through here!

Live at Six plays Nelson, Tauranga and Auckland throughout October and November – details can be found at https://www.facebook.com/LiveAtSix