Hitchcock is a name synonymous with masterful suspense and nail-biting, edge-of-the-seat-tension. His signature style ensured that he became a poster boy for the auteur theory, a theory which gave recognition to the personality and artistic vision of the director. One might expect, then, that Gervasi’s “Hitchcock” film, would deify Hitchcock (played by another ‘great’ of cinema: Sir Anthony Hopkins,) as one of the greatest film makers of all time. However, to my surprise, this biographical film beckons the viewer down dark and disturbing alleyways of Hitchcock’s personality to reveal an obsessive, but slightly pathetic man, who simultaneously perves over a bevy of “ice-blonde” actresses, whilst suspecting his own wife of adultery. Furthermore, Gervasi  attributes much of Hitchcock’s success to his wife, Alma Reville, played to perfection by Helen Mirren. 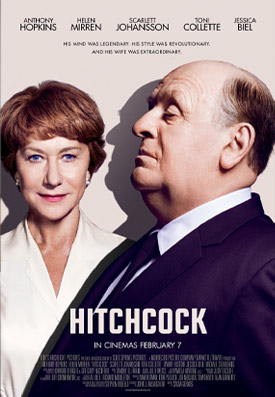 In fact, so much of the focus of the film is on Alma Reville that the film fails to offer a satisfactory analysis of Hitchcock himself. There are, of course, glimpses into the mind of the ‘master of suspense’ such as when Hitch seems to become so imbued by the spirit of a psychotic man that he terrifies Janet Leigh (played by Scarlett Johansson) with the frenzy of his knife-wielding demonstration of what he wants in THAT famous scene from ‘Psycho’.  But this biopic seems to suggest that the true mastermind behind a Hitchcock movie was not Mr Hitchcock, but Mrs Hitchcock!  Hitchcock, the director, is often relegated to the administrative side-lines by this film – he’s the one who has to wrangle with the studio bosses, wrestle with the censors and wade through inappropriate screenplay dross to find his next successful film. His wife, Alma, is the one who comes up with the genius idea of killing off “Psycho’s” heroine a mere half-hour into the movie. Alma is the one who keeps the production of ‘Psycho’ on-track when Hitch is too ill to turn up for filming, Alma is the one who does the scrupulous editing in post-production and Alma is the one who pressures Hitch to use the famous screechy music in the ‘Psycho’ shower scene. I didn’t realise how much Alma Reville contributed to the Hitchcock mystique before I saw this biopic, yet, I cannot help but feel that Gervasi’s film has burnished Reville by diminishing Hitch; tarnishing Hitch’s mighty reputation that once glowed with an unparalleled luminosity.

It helps to know something of Hitchcock’s body of work to appreciate this movie. It is set at the end of the 50’s when Hitch’s “North by Northwest”, was released and considered a huge success. Hitch’s success, coming at the age of 60, counterbalanced his financially unsuccessful films, like ‘Vertigo’ and his work on TV, which was thought to taint him.  The possibility of retirement is floated by a reporter in an early scene in ‘Hitchcock’, to make viewers aware that without Hitch’s commitment to keep working and without his dogged determination to make his project, we may never have had the seminal piece of cinema that is ‘Psycho’.

If you’re keen to see Anthony Hopkins transformed into a credible Alfred Hitchcock by creative and convincing make-up effects, go and see this film. If your visit to the movies goes beyond popcorn and you’re keen to see a brilliant piece of casting, then go and see this film to see James D’Arcy as Anthony Perkins, the actor who played Norman Bates.  If you’re keen to get behind the scenes of a Hollywood film and to see how much ‘background stuff’ chugs away behind the making of a movie, go and see this film. But if you want anything deeper than the most cursory introduction to Hitchcock, this movie will not provide sufficient insight into the most significant filmmaker of all time: Alfred the Great, king of suspense.

Hitchcock is out in cinemas on the 7th of February.