In 2009, producer Peter Jackson and studio Tri-Star Pictures took a chance on an up-and-coming new talent who, despite having never directed a full-length feature before, had exhibited a visionary filmmaker's eye with his short film, "Alive in Joburg." Given the opportunity to make whatever he wanted with a budget of $30-million, Neil Blomkamp came up with "District 9," a wholly original pseudo-documentary about an extraterrestrial visitation in the slums of Johannesburg, South Africa. With seamless visual effects and a scope both staggering and intimate, the picture looked every bit as costly as any number of $100-million-plus summer tentpoles; the difference was that the movie in question was not only a creative idea tackled from a fresh perspective, but it also had more on its mind than explosions and eye-candy. For Blomkamp's eagerly awaited sophomore effort, he has been handed the kind of budget he's never had before—an estimated $120-million, give or take—and a blessed R rating that is in keeping with the director's uncompromising sensibilities. Yet another science-fiction tale bred not from pre-existing material, but out of Blomkamp's and co-writer Terri Tatchell's imaginations, "Elysium" is gorgeous, sturdily paced, and involving. Like "District 9," there is a social message beneath the entertainment value. Unlike "District 9," the story and its mesmerizing settings are underexplored and its themes start to get lost as action fireworks take over in the second half. 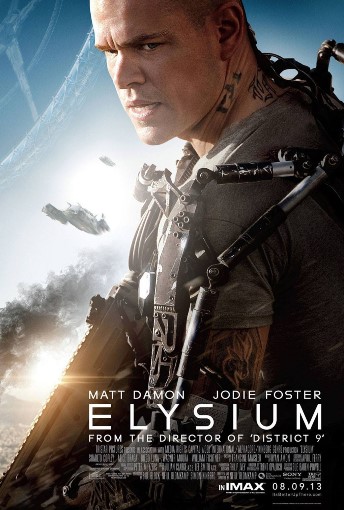 In the year 2154, disease, pollution and gross overpopulation have all but completely destroyed the world, the poor existing on earth in third-world squalor and the rich living just outside the planet's atmosphere on a clean, luxurious man-made space colony created to emulate a smog-free Malibu, circa the early 21st century. Without the money for a ticket to Elysium—a place where technology has advanced to the point where disease and illness can be cured within seconds—the earth's dwellers are forbidden to so much as visit this exclusive new land. When they were kids, the orphaned Max (Maxwell Perry Cotton) promised best friend Frey (Valentina Giron) that he would someday take her to the space station looming in the sky overhead. Now, as grown-ups, optimism for the future feels almost like a distant memory. Max (Matt Damon) is an ex-con working for Armadyne, a robot manufacturing company concerned more with the bottom line than the well-being of its workers. It is their negligence, in fact, that causes Max to be exposed to a lethal dose of toxic chemicals. Facing eventual organ failure and with only five days left to live, he is fitted with an exo-skeletal metal suit to power his body as he makes a last-chance play for a seat to Elysium alongside Frey—now a nurse—and her leukemia-addled daughter. Meanwhile, cutthroat government higher-up Secretary Delacourt (Jodie Foster) will do whatever it takes to ensure that Elysium is protected from interlopers who, she believes, could fatally compromise their delicate newfound infrastructure.

With "District 9" and now "Elysium," it is a safe assumption that writer-director Neil Blomkamp has an interest in class separation as it pertains to the wealthy and the needy, the white collar and the blue, the haves and have nots. This civil-minded theme, brought into the future in "Elysium," questions whether things ever really could change. Despite a semi-apocalypse that has seen the general public separating into two distinct halves, one hovering over the other on the edge of outer space, humans are still faced with the same financial hardships and status issues. Raised up an added notch, the downtrodden can no longer even associate with the people of Elysium or risk near-certain death. It's an eye-opening notion, but a fairly conceivable one, brought to vivid distinction and life through the radiant, crystal-clear visual effects work and stunning digital cinematography from Trent Opaloch. If half the battle of sci-fi is to make the viewer believe wholeheartedly in the amazing images before them, then "Elysium" is a success without exception.

Blomkamp is equally adept at shooting action, all of the combat and shooting and violent explosions and casualties given an always-coherent immediacy that avoids the scattered, too-quick cutting prevalent in today's movies. In "Elysium," the director isn't afraid to pull back and breathe in the scope of the surroundings. Where the film misses an opportunity is in delving deeper into the details of the dystopian society on earth and futuristic lifestyle on the space colony; very little of the latter is given much screen time, and what there is of it focuses on government officials rather than the average (upper-class) citizens of Elysium. The social commentary also tends to get lost in the second half once Max becomes a fighting machine and pyrotechnics take over. It is not that the picture necessarily loses its way so much as it disappointingly falls back on relatively standard action sequences when so much more could have been done with this particular story.

Matt Damon (2012's "Promised Land") proved exceedingly well with "The Bourne Identity" and its first two sequels that he can portray an action hero, a regular guy, and someone worth following, and he does that again here. Max has made mistakes in the past and gotten into hot water with the law. He wants to turn things around, to make an honest living, and hopefully reach his goal of making it to Elysium, yet all those plans are either excelled or destroyed when his life expectancy is radically cut short. In only a few scenes, Damon and Alice Braga (2011's "The Rite"), as Frey, build upon a soulful relationship that began for them when they were both kids. As the radical, coldly efficient Secretary Delacourt, Jodie Foster (2011's "Carnage") is fascinating right down to the curious, vaguely South African accent she pulls off against all odds. One must wonder, though, if her role got trimmed in the editing phase; as good as Foster is, she's also admittedly underutilized. More could have been done with Delacourt, and this film only scratches the surface. Sharlto Copley (2013's "Europa Report"), as Delacourt's out-of-control field associate Kruger, is deliciously devious, becoming the story's central villain. His choice to play the part over-the-top was the right one; no one could accuse Copley of phoning this one in.

Considering "Elysium" next to the recent, in many ways comparable science fiction pic "Oblivion" reveals that Neil Blomkamp's finished film doesn't fulfill the level of ambition of that superior Joseph Kosinski production and partially squanders the opportunity to take his plot to the next level. At 109 minutes, "Elysium" is a great-looking entertainment that could have reached new classic status with a longer cut that allowed the characters to breathe, expand and deepen. A climactic callback to the narrative's opening scenes holds a purpose, but is unnecessary; Blomkamp should have trusted his audience to reach the finale's emotional catharsis without having to spoon-feed flashbacks to them. "Elysium" has a number of problems, many of them related to not fulfilling the premise's full aptitude. At the same time, a film that brings to the table this many great aspirations shouldn't be marginalized when so many major summer movies are content to act on autopilot.

(for strong bloody violence and language throughout).
Reviewed by Dustin Putman, August 6, 2013.