The title, "Bullet to the Head," is an example of truth in advertising at its finest. With few exceptions, every other scene seemingly ends with a character getting blasted in the forehead or temple, blood and brain matter exploding from their instantaneously fatal wounds. Unfortunately, there isn't enough that's memorable in between this carnage for the film—an old-school, unsympathetic action-thriller—to carve out a notable niche for itself. Having seen it less than twenty-four hours ago, its particulars have already begun to rapidly fade from memory. On the positive, as a starring vehicle for an aging actor whose heyday was back in the '80s, Sylvester Stallone (2012's "The Expendables 2") remains far more sprightly and virile at 66 than the limping, decidedly creakier Arnold Schwarzenegger was in the recent "The Last Stand"—and the movie's a little better for it, too. 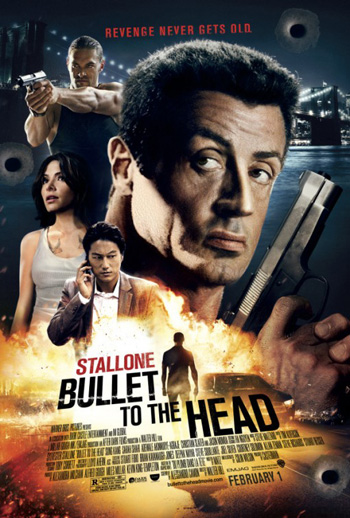 Stallone stars as James Bonomo—or Jimmy Bobo, as people call him—a no-nonsense professional hitman with revenge on his mind after partner Louis Blanchard (Jon Seda) is killed at bayou bar Crawfish Hollow. Discovering some down and dirty dealings are going on within the police force soon after acquaintance Hank Greely (Holt McCallany) becomes Jimmy's latest victim, Detective Taylor Kwon (Sung Kang) sees little choice but to team up with the career criminal as they sniff out the shady people suddenly targeting them both. Jimmy and Detective Kwon are unlikely allies, to say the least, and the latter knows that when their mission is done, he may just have to take Jimmy into custody.

Adapted by Alessandro Camon from the graphic novel "Du plomb dans la tête" by Matz, "Bullet to the Head" opens with a veritable bang, a bullet ripping through the studio logos and the film's title illuminated on the outside of a club suggestive of the high style yet to come. Instead, the movie simmers down after this and turns into a much more typical, threadbare excursion where the plot and characters are ridiculously convoluted yet as wispy as gore-soaked cotton candy. Director Walter Hill, who hasn't helmed a feature in over ten years and has been down on his luck for longer than that—he even chose to be credited with a pseudonym after the debacle that was 2000's infamously troubled sci-fi pic "Supernova"—brings few distinguishing aspects to what plays as a low-rent work-for-hire gig.

Sylvester Stallone's baritone voice is only getting deeper with age, to the point where when he speaks, it's a wonder the ground doesn't rumble apart and swallow him whole. His vocal deficiency notwithstanding, Stallone has still obviously got what it takes to believably play action-oriented heavies. He's in incredible shape and does a solid job of swerving between straight-faced seriousness and tongue-in-cheek one-liners, most of them at the expense of his new Asian partner. As Detective Taylor Kwon, Sung Kang (2011's "Fast Five") has trouble keeping up with Stallone; he tries, but lacks interest and charisma. As central antagonist Keegan, doing all the bidding for nefarious higher-ups (Adewale Akkinuoye-Agbaje, Christian Slater), Jason Momoa (2011's "Conan the Barbarian") is physically daunting, but given so little to do beyond stab and shoot and whack that his most notable trait is the scar across his eyebrow. When, in the one-on-one, fight-to-the-death finale, he and Stallone throw down their guns and pick up axes, it's enough to make an entire audience want to collectively bash their heads on the seats in front of them. Under the numbskull circumstances, it's appropriately tough and tense, a highlight of the film that delivers upon expectations.

"Bullet to the Head" is neither a fresh watermark on Sylvester Stallone's résumé nor an obvious embarrassment. Instead, it exists in a land of middle-of-the-roadness, one that does nothing spectacularly, but can be admired for staying as uncompromising as it is. Jimmy Bobo isn't the most virtuous of men himself—he is a hitman, after all—but he does have a soft spot when it comes to his tattoo artist daughter, Lisa (Sarah Shahi), and is entirely unapologetic about his line of work and the things he's done. Stallone gives the character a laid-back, contented wisdom with a past to show for it—in one amusing but telling montage, his collection of mug shots from decades' past bring the viewer up to the present—and it is this unexpected layer surrounded by two dimensions that raises "Bullet to the Head" one notch above a complete failure. As forgettable as the movie is, it more or less gets the job done.

(for strong violence, bloody images, language, some nudity and brief drug use).