Book Review: To My Sons:Lessons for the Wild Adventure Called Life

Currently based in the delightful town of Motueka, Emma is pursuing her passion for the written word and yoga teaching. Her motley background and eclectic interests provide Emma with much to write about many things, which she mostly does online. She is also busy unleashing her inner fiction writer.
www.andjustbytheway.wordpress.com

From internationally renowned and extremely popular television personality, Bear Grylls, comes To My Sons: Lessons for the Wild Adventure Called Life, his latest, heartfelt book. Bear may have been one of the youngest ever climbers to reach Everest's summit, but he declares that raising his three sons, Jesse, Marmaduke and Huckleberry, has been his greatest adventure of his life. 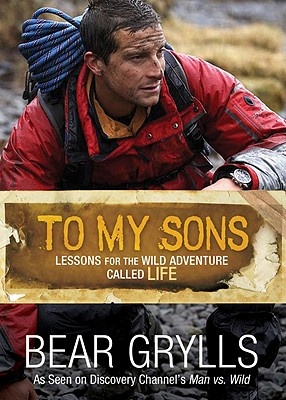 In To My Sons, Bear shares with his sons the sayings, Scripture verses, and spiritual insights that have most helped him through his life. This charming little book is a treasure trove of honest, heartfelt thoughts, offering a father's timeless advice for the "game called life," not only to his own sons, but to children of father's everywhere.

A little more religious than I had expected, To My Sons clearly conveys the life lessons that Bear wants to pass onto his children, and the values that he feels are important they learn.  The result is that the reader is not only entertained and offered pause for thought, but also learns about the man behind the camera, behind the adventure, as he openly displays his messages of love and encouragement. Interjected with a series of humorous illustrations by UK based sketch artist Charlie Mackesy, this book is easy to read, and makes an ideal gift.

After spending three years as a soldier in the British Special Forces, Bear Grylls went on to become the Emmy Award-winning host of Discovery Channel's hit show, Man vs. Wild. As mentioned, he has also been recorded as one of the youngest climbers to reach the summit of Everest. He lives with his wife, Shara, and three boys on a small private island off the coast of Wales, or on their barge on the river Thames. He has authored 10 books.