Jeremy is based in central Hawkes Bay. He is an avid reader and writer of fiction, spanning across all genres, he also writes articles for getfrank.co.nz. Jeremy has a solid background from within the trade industry and management.

There may be some epic fantasy readers that are familiar with the surname, Gemmell. Stella worked with David Gemmell on his ‘Troy’ series as editor and principal researcher. Following his death in 2006, Stella co-authored ‘Troy: Fall of Kings’, completing his final book. 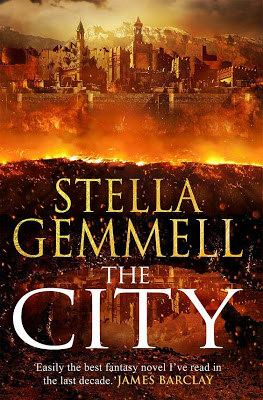 Stella Gemmell makes her solo debut with the dark epic fantasy, The City.

This story is enormous, detailed characters that range from all walks of life, battle hardened soldiers to the dwellers that live deep within the maze-like sewers beneath the city; An intricate plot that requires your undivided attention (trust me on this), a complete immersion into a dark culture, religion, politics, history, war and magic.

Built up over the millennia, layer upon layer, the City is ancient and vast. Over the centuries, it has sprawled beyond its walls, the cause of constant war with neighbouring peoples and kingdoms, laying waste to what was once green and fertile.

And at the heart of the City resides the emperor. Few have ever seen him. Those who have remember a man in his prime and yet he should be very old. Some speculate that he is no longer human, others wonder if indeed he ever truly was. And a small number have come to a desperate conclusion: that the only way to stop the ceaseless slaughter is to end the emperor's unnaturally long life.

From the rotting, flood-ruined catacombs beneath the City where the poor struggle to stay alive to the blood-soaked fields of battle where so few heroes survive, these rebels pin their hopes on one man. A man who was once the emperor's foremost general. A man, a revered soldier, who could lead an uprising and unite the City. But a man who was betrayed, imprisoned, tortured and is now believed to be dead...”

There is a Romanesque meets medieval feel about The City, vast and layered from generations of expansion, and expand is what The City does, waging war with neighbouring kingdoms until all opposition of an elusive emperor are destroyed. The reader is propelled along with battle strategy, violent battle scenes and the consideration toward social structure is first rate, both politically and within the army’s infrastructure.

The multitude of characters are rich with detail and colourful back-story, although the names can become tedious as they literally change as the plot progresses (I wasn’t kidding about undivided attention).

The City is about conspiracy, revenge and honour...all the good stuff you’re looking for in an epic fantasy. There is enough left unresolved for a sequel but the book works well as a stand-alone.

My only gripe with the book is that some reveals are fore-shadowed and that removes the shock factor for later, as a loose example, let’s say at the end of one chapter a character may be angry with another but to finish along these lines ‘He stormed out of the room. He couldn’t stand her, so he wouldn’t understand how upset he’d be when he found her corpse’ – pretty much downplays the next chapter for me. Aside from that, as far as a debut novel goes - especially an epic - this novel goes head and shoulders beyond others.

Once the plot kicks in, The City is hard to put down... and as fat and sprawling as this book is, with you wondering where your weekend went, you’ll be left wanting more.