Paul McKenna’s “Hypnotic gastric band” is a short term solution to a long term problem. Like many self-help writers, this book claims to provide long term, workable solutions for people in a particular area-namely weight-loss. In essence, it mostly succeeds at what it sets out to do. For anyone looking to lose weight, it will provide a springboard towards a ‘new you,’ which is no easy feat in today’s world of sloppy ready-made meals, lazy lifestyles and an incredible desire to eat more. 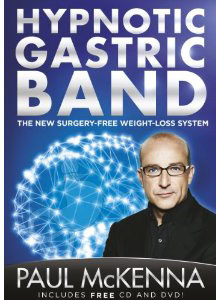 Apart from the “Hypnotic gastric band” which is installed on your stomach after reading the book, there is nothing too revolutionary. In the way of losing weight, McKenna lays out four golden rules. If followed properly, results will come. Some diet clubs used to abide by these rules but have lazily neglected them (surprisingly).

Rule One: When you’re hungry eat

Rule Two: Eat what you want, not what you think you should

Rule Three: Whatever you eat, do it consciously

Rule Four: When you think you are full, STOP eating!

Alongside a brief outline of the digestive system functions and how it works, the four golden rules serve as the baseline for having a successful installation of the hypnotic gastric band.

Like any curious mind I decided to have a hypnotic gastric band installed. After 30 minutes of hypnotism, the band had been installed and it was time to put it to the test. For the next ten days, partial hypnosis, as well as following the four golden rules seemed to have influenced my eating habits tremendously. While I did eventually end up losing just a single kilogram, meals which normally went down easily were suddenly a battle to finish. Eating throughout the day, rather than feasting on three square meals became normal. So too did the desire to actually want to lose weight.

Hypnotism is a short term solution to fixing a long term change in living a healthier lifestyle. Like anything worthwhile, you have to constantly work at it. Hypnotic Gastric band is the best book available which can genuinely help you move towards adopting a healthier lifestyle. Each piece of information and advice is practical and genuine. Through a period of trial and error, Mckenna establishes the framework people need to stay in a healthy weight zone. His book will motivate and help overweight individuals who think being skinny is a far off dream.

I would not encourage anybody to use the “Hypnotic gastric band” as a long term solution to losing weight. Rather, see it as an opportunity to gradually make small, subtle changes in your lifestyle which will then enable you to lose weight. With patience and perseverance, a healthier lifestyle will come naturally.

“Hypnotic Gastric Band” is Paul McKenna’s best work by far. What set him apart from other self-help people are his incredible results. This book will help you lay a foundation for a much healthier lifestyle.