‘Home Country’ by TW Lawless is a graphic, exciting and thrilling novel. So much of a writer’s craft depends on their ability to capture an audience in the first page and that is done quite fluently with the introduction of the protagonist. “Peter Clancy drifted along Lygon Street, feeling hung over from last night’s drinking binge at the Tote.” 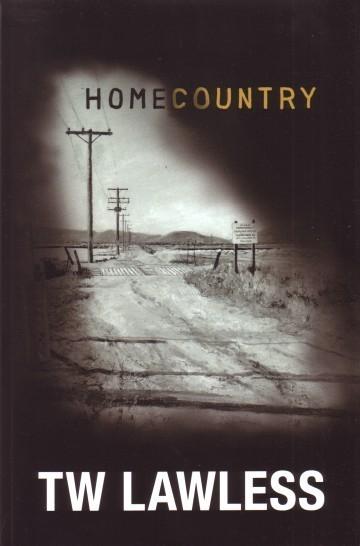 Clancy is a journalist for “The Melbourne Truth,” a newspaper which is notorious for publishing celebrity gossip. Without warning, he is informed about his mother’s death and goes back to his old hometown: Clarkes Flat. Upon arriving, there is a reawakening of old memories which took place many years before; events which Peter had worked hard to suppress and forget about. Before long, a childhood friend Dave Tindall manages to track him down. He is asking Peter if he would be willing to investigate the story behind the deaths of his father and another man who reportedly committed suicide in successive days in 1969. Peter is reluctant at first, hoping to return to Melbourne straight after his mother’s funeral and house cleanout. Eventually, Peter is convinced by Dave and (his father’s old ranch worker) Sam Saturday to probe into the suicides. Dave and Sam suspect police officer Maxwell Hillard is behind the cover up.

The structure of the novel is interwoven with two different time settings. After Peter is introduced as a character, Lawless takes the reader back to the events leading up to the suicides. Many characters are introduced in rapid fire succession. With such a speedy introduction, it can be a bit difficult to remember exactly who each person is and their role in the town. Lawless recognises this and does well to reemphasise characters roles without compromising the quality of the novel. Going back in time helps set the tone for characters which Peter sees again on his unofficial investigative visit.

The book is full of frightening events. There is rape, there is murder, there is corruption, and there is sleaze and swearing. In a way, all of this adds to the reality of what happens. Crime rarely looks glamorous and spectacular. The genius of Lawless lies with his ability to create a disturbingly real setting for the novel, whilst maintaining consistent, well rounded fictional characters who inhabit this world. Clancy becomes very emotional as he investigates the case even further. The difference between the personalities of small town people and city dwellers stands out. Victims of crime suffer from terrible phobias. Every time something startling happens, very raw emotion is felt by each character. ‘Home Country’ is a rather enjoyable read for mature crime fiction readers; be warned thought. The events in the book can be unsettling.

A concern which I did have was with the pacing. With the events of the past, Lawless moves steadily and quickly through each event. When Peter is working on piecing together clues, everything slows down markedly. Perhaps this was done to challenge the reader, challenging them to take into consideration every event which takes place to predict what happened. I managed to predict the ending myself after Peter visits a girl whom he knew from childhood. With that said, I was still very surprised.

‘Home Country’ emphasises how crime can linger around and changes the lives of victims forever. Lawless does a commendable job in creating a novel which engages, challenges and transforms readers thinking processes in regards to crime investigation.