Elise Macadam is much, much, more than an average English teacher.  She’s also, quite possibly, the most prolific armchair movie critic, and TV reviewer, that her family has ever known. It’s rumoured that Elise dines exclusively on books, and magazines, and that is how she remains so thin and waif-like.

Have you ever played in a band? Taken guitar lessons? Had an obsessive interest in a rock star’s music and the instruments he uses to create his unique sound?  If you, like many other people, answered ‘yes’ to one or more of those questions, that would likely make you an ideal reader of this book.

‘1001 guitars’ is set-out logically and pleasingly. The instruments are arranged according to decades, starting at pre-1930’s and going through to the 2010’s. Each listed guitar is accompanied by a clear colour photo, a list of four items, e.g. fingerboard, and a discussion of matters relating to manufacture and the instrument’s performance. Interspersed throughout these pages are full colour photos of musicians using the guitars that are being profiled on the facing page. 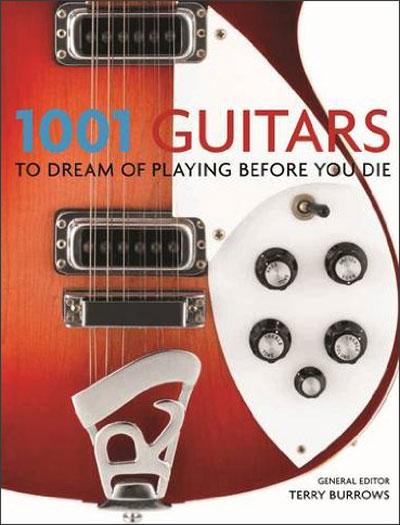 I don’t belong in the camp of ‘Team Guitar’ but I’ve got family and friends who do know the difference between the term ‘pick-up’ when used around guitars, and when used in a social context, and over the years, they’ve helped to educate me about guitars. I’ve watched movies like “Walk the Line’ and listened to favourite musicians, like guitar aficionado John Meyer, so I’ve heard mention of some of the famous brands: Fender, Stratocaster, Gibson. It was fun using this book to look up the Kurt Cobain guitar and spy Ed Sheeran playing his three-quarter guitar, but I don’t know that my fairly casual interest in guitars would warrant adding this book to my personal library.

I can see this book being well-thumbed by music students, guitar enthusiasts and passionate musicians, but not the average ‘Joe-Schmo’! That doesn’t mean that one couldn’t “dip into the pages and enjoy”, rather it means that unless there is a genuine ardour for the topic, one’s interest is likely to flag fairly quickly. For the guitar enthusiast, I would imagine that this book would be un-put-downable!