In the new Seth MacFarlane comedy Ted (2012), Mila Kunis stars as Lori, the long-suffering girlfriend of Mark Wahlberg’s talking-teddy-bear-toter, John Bennett. When John and Ted’s antics push Lori to the brink, she finally lays down the law, forcing John to choose between the two loves in his life.

Born in the Ukraine and raised in Los Angeles, Mila Kunis’s big-screen credits include the Oscar-nominated Black Swan (2010), Friends with Benefits (2011), Date Night (2010) and Forgetting Sarah Marshall (2008).  On television she’s starred in the popular US sitcom, That ‘70s Show (1998-2006) and currently voices the character of Meg Griffin on Seth MacFarlane’s Family Guy (1999-).

Why did you want to make Ted?  I know you work with Seth MacFarlane on Family Guy, but how did it all come together?

As a child, did you ever have a stuffed animal that you felt was truly alive?

No. I think it’s wonderful, but I was not that kid. I was outside a lot with my brother and the kids in the neighborhood. My goddaughter has a lamb who she calls ‘Meow.’ She’s three. She’s very cute. She will not go anywhere without him. She puts him to bed before she goes to pre-school. Then she runs home and she checks up on Meow. That is a relationship.

What was it like working with Seth MacFarlane this time? Was it different compared to your routine on Family Guy?

What was the biggest challenge making Ted?

You said you weren’t into stuffed animals as a child… What were your toys?

I didn’t play with toys [either]. I played soccer and I climbed trees. My knees and my legs are completely scarred, fully, because when I was little all I did was play outside for hours on end. My dad would go on a business trip and bring back the most beautiful – and we still have these – beautiful dolls. Like, stunning, stunning dolls. I wanted nothing to do with them. Nothing. I couldn’t care less. 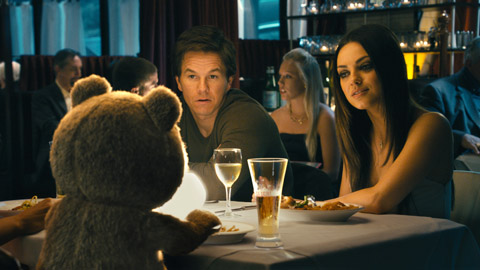 What is your best childhood memory?

I was probably five and my grandfather was laying on the couch in the living room. It was right before New Years. In Russia, we didn’t celebrate Christmas the way Christmas is celebrated here. New Years was the big thing. As a kid, I would get bubblegum and tangerines. That was like the greatest gift you could give somebody. I don’t know what you would compare it to in the States, but imagine the Elmo doll when Elmo was at the height [of popularity].

Have you ever had any terrible roommates?

You know what? I’ve never had a roommate, up until recently, ever in my life. Never. Now I live with my best friend. Last year I spent two months in LA and so I needed somebody to help me with my dogs, and my housemate is the only person that I trust. So that’s my so called ‘roommate’. He’s not really my roommate. He lives on the opposite side of the house. He’s my best friend.

You enjoyed early success in television, but were you ever concerned that you wouldn’t be able to make the jump to film?

I ended [That ‘70s Show] at 22 and there was a period where I had to make a conscious decision of whether or not I wanted this to be my career. Because this whole time, it was a hobby. It was a very lucrative hobby, but a hobby. I didn’t think I was going to be able to do this for the rest of my life. So here I am. I’m 22. I’m put in an amazing position where I came off of a show for eight years and I don’t have to work for the sake of working. I don’t live a lavish lifestyle, so I could just be smart with my career. So I was like, I’m going to prove everybody wrong. The way that I did that was I auditioned for everybody. Everybody. I went and read for everyone, every Joe Schmo, every B-horror movie, every A-list director – anything, just to prove to people that I could do it. I had no shame. I had no ego. Through that I do believe that you kind of gain a little bit of respect. People are like, “Oh, so she could do this.” I didn’t expect anything to happen. I didn’t expect someone to hand me a perfect movie on a silver platter. I auditioned for everything. 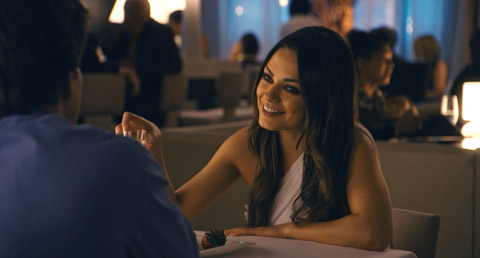 Why did you feel the need to prove people wrong?

This is what I wanted to do. The only way that I could do it and do it right, was to not have an ego about it, in order to prove people wrong.  After [That ‘70s Show] I could have gone and done television. Not that I didn’t love doing television because, you know what, I do really want to go back to TV. It’s very steady. It’s 9 to 5 and I get to be home with my family. When I was twenty-two, I was like: ‘I want to travel, I want to see the world and I want to… I want to test myself.’ I know that there’s so much more that I can do.

Where did you learn your outlook on life?

I’ve said this before and I’ll say it again. When you have nothing, everything else is a plus. It doesn’t matter.  It’s not like I became wealthy over night. Here’s the truth. We weren’t poor in Russia, but when we came to America, we were really poor. I didn’t know we were poor. I had no concept of money because it wasn’t something that was ever talked about in the family. I didn’t see my dad for the first three years of my life in the States because he had an obscene amount of jobs in order to take care of the family. I didn’t know how poor we were until I met a wealthy person. Then I was like, “Oh…I get it.” Somehow my mom and my dad managed to always have food on the table. We always had a roof over our heads. We always had what we needed. That’s all that was necessary. I mean as a kid, you don’t need much. You may desire a lot. You may say the word ‘want.’ Just because you want it doesn’t mean you need it. I had everything I needed. I played with friends. I had an amazing family. I grew up with so much love and so much care that I think it just overweighed everything else. I really do.

What’s the role that you’re most proud of?

What are your hopes for Ted?

I just hope people are entertained by it. If that’s the greatest gift that I can give to somebody – that’s fantastic.