Cider is a simple drink which is very difficult to perfect. Isaac’s ciders are a niche product. Each blend ventures slightly outside from just apples and includes a reasonable mix of different flavours. You may be impressed to know that this product line is only available in New Zealand and uses flavours which are synonymous with Kiwi culture.

Joining me for the tasting was a cider connoisseur. Going through each drink, we based the overall success or failure on five factors. Smell, initial taste, aftertaste, flavour compatibility and event suitability. 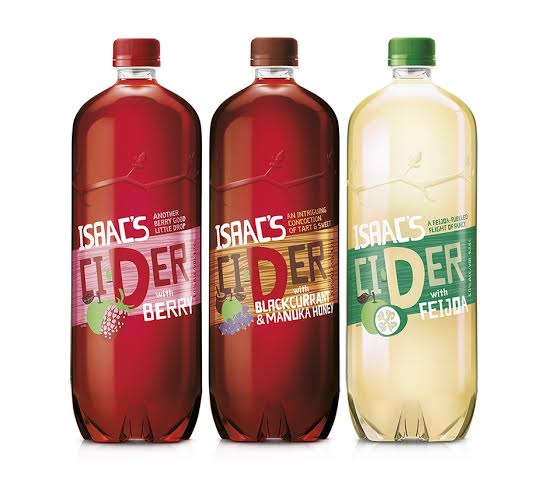 Isaac’s cider with Blackcurrant and Manuka Honey had a strong blackcurrant smell with a small shade of apples. The initial taste was definitely more noticeable with the honey, with the blackcurrant finding its way back in with the aftertaste. The consensus was the flavour compatibility works if you enjoy rich tasting ciders. Events where a cider like this would go down well would be a barbecue which has a pork dish on the menu. Experimenting with honey flavours in a cider was brave. The connoisseur noted it did take away the hard zing a traditional cider delivers.

Isaac’s cider with Berry. This blend tasted more like a fizzy drink to me than a cider. The berry taste was so strong the connoisseur poured himself another sample to re-taste the flavour blend. “Same taste as the first time.” It smells like a cider and has a cider aftertaste but in between it is all berry. The flavours almost seem to be isolated and never really lock together. It would be suitable for any type of party event where there are lots of sweet foods being served. If you want to enjoy a cider which is richer than usual, you’ve got a good match here.

“Wow, this is really nice,” is all both the connoisseur and myself could say when we tasted Isaac’s cider with Feijoa. Opening the bottle, a sweet pleasant smell of cider and feijoas came out. Smelling it closely the blend synced very well together. The taste was initially cider before the feijoa taste came rushing through, and remaining on in the aftertaste. There was no separation or confusion between the flavours; they worked well in tangent and complemented each other brilliantly. There was a good balance of cider zing and x-factor to make us sit up and take notice. It was a winner. No matter what the event, Isaac’s cider with Feijoa must be there.

Keep a look out for Isaac’s ciders. While they may not all be to your liking, there will most likely be one that will taste fantastic again and again.