“Just way too much sugar for my liking mate.” You won’t hear Hopt Soda drinkers saying that. The goal of creating a line of fizzy drinks which are low in sugar and contain natural flavours, rather than artificial flavours has been achieved. Crafted by a multi-national team, the end result is Hopt's line of four flavours. Lychee juice and real hop extracts, pear juice and basil, cool mint and watermelon juice, as well as elderberry and herb.

First up was the Lychee and real hops blend. As a big fan of the lychee fruit and lychee juice, I was eager to get tasting this soda. My friend was a bit surprised by the taste, stating that had it been a bit less carbonated the drink could have really been a first choice pick for a hot summer day’s drink. He is for the most part correct. Lovely concept but sadly a bit too carbonated to taste the lychee flavour.

The pear juice and basil was easily the best out of the four, carrying a smooth sleek taste with just enough zing from the basil. It would be great for an afternoon barbecue. My friend said it has a distinct taste which distinguishes it from conventional sodas. The biggest asset to it though comes with the soft sleek pear flavours which provide a breakthrough enjoyment in taste. This blend of flavours will be filling cooler boxes on beaches very soon. 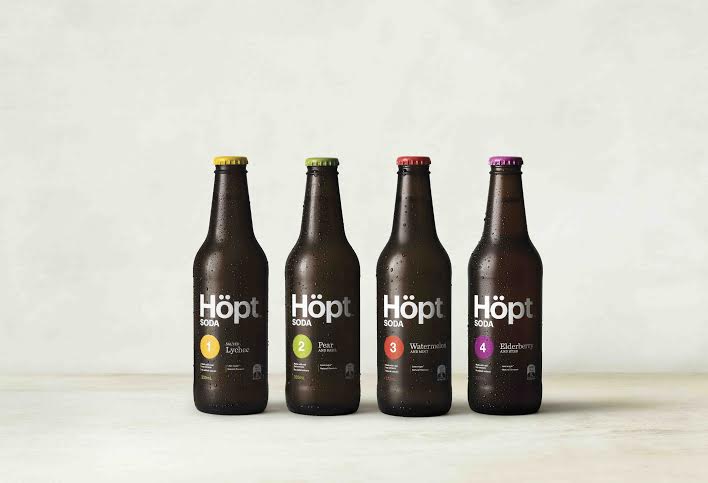 Next was cool mint and watermelon. It has always proven to be a difficult task to capture a full watermelon flavour within any particular product. Both of us certainly felt a strong minty aftertaste after a small sip. The mint is definitely there but the watermelon stayed only briefly as a fading aftertaste. It was the least likeable drink out of the range. Carbonating a mint flavour does not work! The focus should have been on getting the watermelon flavour through.

Last up was the elderberry and herb. It certainly smelt like its flavours. My friend told me that people’s interest in the drink will largely rest on how much they enjoy the taste elderberry. If they do then they’ll love the drink. If they don’t…well they won’t like it. He found the herbs to be invasive, while I thought the blend to be a solid pairing. It was solid without being spectacular.

Hopefully Hopt brings out some more flavours. It shall be interesting to see if the focus centres on one flavour or focuses more on blending two flavours together in harmony.