I grew up in the mighty Waikato. My father was a fire-fighter at the local mill in Tokoroa and my mother was a hospital lab technician. In my early teens, we moved to Hamilton. Then I studied aeronautical engineering at the Air New Zealand training school in Christchurch. After graduating, I worked for Eagle Air Maintenance (one of the Air New Zealand link operators) at Hamilton airport, carrying out routine maintenance and defect rectification on the fleet of Embraer EMB 110 Bandeirante, Fairfield Metroliner, and Beech 1900D aircraft.

I relocated to London in the mid 2000’s, joining thousands of other Kiwi and Aussie expats who hoped to balance working a job, with exploring Europe. I worked on the London underground trains for a while before returning to aircraft like Boeing, British Aerospace and Airbus at Heathrow, Stansted and Luton airports.

In 2009 I decided on something vastly different, obtained a coach driver’s licence and started a position with Topdeck, where I drove 18-30-year olds around Europe on bus holiday packages.  Despite a gruelling eight-week training trip, that was somewhat of military experience, I went on to spend an amazing two years exploring Europe and making amazing friendships!

Another pivotal decision occurred when I returned to Hamilton in 2010 after five and a half years abroad. I joined ‘NZ Fire and Compliance Ltd’ (NZFC ) which was my father’s building compliance business. NZFC undertook Building Warrant of Fitness and Fire Evacuation work in the Waikato and through this compliance work we noticed that most of the buildings did not comply with the building code in respect of the Fire Separations within them. Fire separations are necessary within buildings to protect both life and assets, as well allow FENZ (Fire and Emergency NZ) to perform rescues. In some cases, such as hospitals, the purpose of these separations is to allow certain areas of the building to evacuate from one area of the building to another, called a staged evacuation. In recognising this shortcoming, NZFC have become industry leaders in the inspection and rectification of fire separations. Vizzybell was born from working with hospitals; to meet their need for performing staged evacuations an exciting new product called the NEXIT was designed.

What are some of your passions outside of work?

I love to socialise. Whether I’m enjoying a drink with friends at the pub or a meal out with family, or going mountain biking, wake-boarding or skiing, I find having downtime is really important to counterbalance to the intensity of the job.

You have been in the fire safety industry for a while now. How has the industry changed over the years? And is it changing for the better?

A main focus in our business has been the passive side of the fire safety industry, i.e. fire separations.  When I first started, it was very much a forgotten component of the industry. 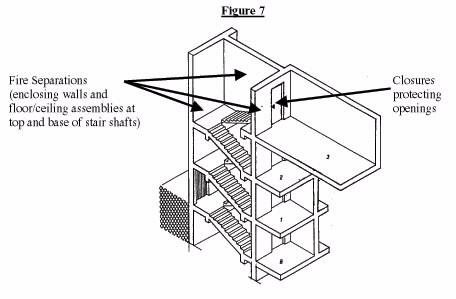 When we build fire separations, we have to ensure that services, such as pipes and cables, that pass through these separations are built and fire rated in the same manner to which the products were tested. (I’ve put an example above. If you have a better image, please send it through). By ensuring this takes place, everyone can have confidence that these ‘passive’ systems, when needed, will work.

At some stage, most of us will have seen the “C’mon guys get firewise messages” on TV. Are there other things we could be doing in New Zealand to improve our knowledge and awareness around fire safety?

Many people still don’t take the risk of fire as seriously as they should.  It is important to have simple procedures and precautions in place and the FENZ website is an excellent place to gather great tips https://fireandemergency.nz/

Most commercial organisations will have a nominated fire warden. Do you think it is worthwhile for them to be offered the chance to attend a course on fire safety?

The Evacuation of Building Regulation 2018 makes it mandatory for wardens be trained in evacuation procedures that have been approved by FENZ. Even if the regulations do not require an approved evacuation scheme, we believe it is worthwhile for organisations to have clear procedures and trained staff to ensure all occupants can evacuate safely and be accounted for.

You are one of the founders of Vizzybell. Tell us a bit more about the company and what products/services you provide?

NEXIT was my father’s genius idea and Vizzybell was established in 2014 to revolutionise the fire safety industry. Vizzybell designs and manufactures real time EXIT signage that switches between a GREEN EXIT to a flashing Red NO EXIT mode, according to the input received from the fire alarm sensors. This signage sits above the fire separations that divide buildings into separate firecells. This gives occupants of buildings like hospitals a clear understanding of what egress routes are safe to use and what areas of the building are a place of refuge.

One of the cool things about your Nexit signs is that they are linked up to the main fire alarm system in the building. Can you explain how that works a little more?

Fire alarm systems have the ability to decipher the exact location within the building that has detected a fire. From there the alarm is able to trigger certain relays which automatically trigger a change from the solid Green EXIT state to the flashing Red NO EXIT state to indicate that egress is no longer safe.

Will you be attending the NZFPA Conference next month?

Yes, I’ll be there on Thursday and I look forward to meeting and chatting to people throughout the day.

I back the All Blacks and wish them the best of luck!