Jeffrey Phillips is a Certified Personal Fitness Trainer, known as Norheast Ohio's Fat Loss Professional, he has been in the fitness industry for 9 years. He offers personal a group fitness training, as well as on line fitness training. visit his website at www.3setsof10.com

After working out in gyms, health clubs and martial arts studios for the better part of 20 years, I considered myself fairly strong, or at least stronger then the average man on the street. Recently, I have had an experience that makes me reevaluate my strength. Three(3) summers ago I working on a construction crew. We poured concrete foundations and basements for residential buildings. The daily routine on this job is equivalent to an 8-hour work out, 5 days a week. Every major muscle group is used repeatedly in most construction jobs, and used in a less then ideal workout environment.

Uneven terrain, direct sunlight and ravenous insects are the highlights of the construction site health club. After 3 weeks of struggling to keep up and berating myself for not increasing my strength training when I had a chance, I decided to approach my job from a personal training point of view.

I realized that the first order of business was to concentrate on symmetry. Working both sides of the body in equal amounts. The muscles of the back, shoulders and legs handle the bulk of the work.

When carrying these objects you must balance them on the anterior portion of the deltoid, biceps, and brachioradilis (forearms). The awkwardness of these objects is such that it requires recruitment of the stabilizer muscles of our core (abs, obliques, lower back) to properly balance them.

This is particularly true when pulling these items off of a truck with hands at shoulder level or higher, which calls on the muscles of the upper back (trapezius, rhomboids, and posterior deltoids) in addition to the core stabilizers. 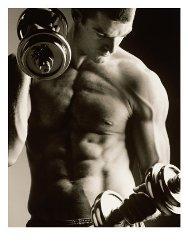 When performing pulling movements at unusual angles you should first engage your stabilizers and ensure that your feet are properly space for balance. The muscles of the shoulder girdle must be engaged to minimize the risk of injury. The pulling motion is similar to that of a standing horizontal rope row, or a seated row except that you are standing. Let the trapezius and rhomboids do the work as you pull the object towards you. When placing the object on your anterior deltoid(front of your shoulder) and biceps, brace your muscles as if beginning a squat with a barbell resting on your upper trapezius.

Instinctively we would normally place these objects on our stronger side. (Left or right) To maintain symmetry and promote growth of our weaker side you must alternate sides as much as we do when doing dumbbell work.

When carrying heavy items from truck to work area, use the mindset of a traveling lunge. Much of the terrain is dirt, clay, rocks and inclines. The inclines can be as high as 24?n. Alternate which foot hits the incline first. Get a firm footing and drive off the front leg (pushing off through the heel) to hit the hamstrings. If the weight is not too heavy try walking for several yards on the ball of the foot to work the muscles of the calf.

Overhead lifting Often objects are carried for a distance with both hands over the head. While walking, with strict attention to keeping core muscles engaged, perform a military press. Avoid locking out the elbows as this puts unwanted strain on that joint as well as the shoulder joint.

When lifting objects from ground or knee level to above shoulders, bend your knees in a modified squat and lift with the legs to take the strain off of the spine. When the conditions make it necessary to stand with one leg in front of the other while bearing weight, be sure to alternate legs to ensure resistance is evenly distributed to both legs. 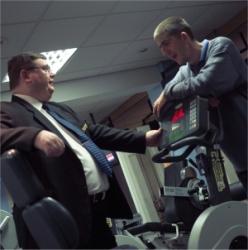 Arms The muscles of the arms are used constantly and also receive a good resistance workout. The motion of swinging a hammer is similar to a triceps extension. Alternate hands and try flexing the triceps (muscles on the back of the upper arm) while performing this movement.

When carrying items in one or both hands, i.e. power tools, buckets, etc., don?t let the item hang at the end of your arm keep shoulders flexed, elbows slightly bent and flexed, and maintain an erect spinal position. You can perform bicep curls with the object if the weight allows. If a full curl is not practical a half curl or half static(non-moving) curl will provide isometric contraction and help promote growth of the biceps. Partially supinating the wrist while curling will simulate a hammer curl.

This article hopes to help those who cannot make it to the gym or are too tired after a long day of construction. These suggestions will help prevent or eliminate the risk of injuries and help develop muscle strength and endurance.