The Future of Biculturalism

Former Labour Party leader Helen Clark was always a strong admirer of Sweden. During her time as New Zealand’s Prime Minister, that country was doing well and she was keen to emulate their model of government within our policy framework: “Sweden and New Zealand may be geographically a long way apart, but our shared values, attitudes, and policies make us among the most like-minded countries on earth”. 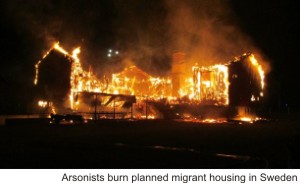 In particular, their open borders immigration policy, which has been described as the closest thing the Swedes have to a national religion, has been responsible for the country being swamped by refugees and asylum seekers. Almost 200,000 entered Sweden in the last year alone. As a result, migrant services are unable to cope, and the peace and stability of the country is now at risk.

This week’s NZCPR Guest Commentator, Fraser Nelson, the editor of Britain’s long-running Spectator magazine, explains that the problem for Sweden is that while the migration crisis meant that the immigration situation facing the country changed dramatically, their policy did not:

“If the finest political minds in Sweden had set out to incubate a far-Right backlash in the world’s most tolerant country, they could not have done better than what has happened over the last few years. First, run an open-door immigration policy making your country the top destination in the middle of a global migration crisis. Next denounce as ‘neo-fascist’ anyone who raises objections. All of this has handed entire sections of the electorate on a plate to the Sweden Democrats. Its leader, Jimmie Åkesson, was on sick leave for five months – he need not have returned. His rivals have been doing all his work for him.”

After many months of growing public alarm over the number of immigrants flooding into Sweden, border controls were finally introduced late last year. But the internal strife caused by the massive influx of migrants remains, with widespread social unrest, rising crime, and the emergence of vigilante groups. The police force appears unable to cope with the scale of the problem.

The reality is that Sweden’s main political parties took far too long to respond to events that were destabilising the country – largely because they were reluctant to change a policy that had long been heralded as a core plank of Swedish society. However, with the migrant crisis showing no signs of waning, the government was finally forced into action. The problem for Sweden is that the changes came far too late.

This example of a core social policy becoming embedded within the political establishment to the detriment of a nation is not, of course, unique to Sweden. It is a problem faced by many democracies where a ruling party has its political identity wrapped into a particular policy and is reluctant to make change.

New Zealand is facing just such a situation right now, with an established policy that is creating growing social concern and is in urgent need of reform.

It is the controversial policy of ‘biculturalism’ – a policy that is now being used to divide our population along racial lines to give a minority an elite status of economic power and influence.

In New Zealand, the bicultural movement emerged in the seventies, spearheaded by academics and politicians seeking greater social justice for Maori. But the movement became radicalised, and followers were embedded into government institutions to change society from within.

Nowadays bicultural policy is driven by a political and tribal elite.

By reinterpreting the Treaty as a so-called ‘partnership’ with the Crown, they are claiming status as a superior ruling class entitled to co-govern the country on the basis of their race. And by inserting Treaty principles and bicultural policies into a growing body of New Zealand legislation – including, crucially, the education system – they have created a state-run indoctrination system.

But many New Zealanders are now troubled by the implications that radical biculturalism has for our future. Some quite rightly say it subverts the fundamental principle of democracy upon which our nation is built.

Democracy stands or falls on the principle that recognises the equal value of all citizens – irrespective of background or birth. It gives each citizen the power to hold the government to account.

Biculturalism is the opposite – it is a system where tribal rulers are unaccountable and their power and authority unchallengeable. This is not what New Zealanders want.

In 2012 I reported on two Focus Groups that had been convened to investigate public attitudes to biculturalism – it is worth repeating the findings. Most participants saw biculturalism as divisive, dangerous, and backwards looking. They believed that segregating the population on the basis of race was not the way for a modern society to move forward.

They felt it was time that the Maori seats and other symbols of a bicultural past were abolished. New Zealand had evolved and moved on – “one people, one race, one country”.

They also asked an important question: Do Maori have more value than everyone else? The consensus was, “It’s making us different people when we are all one race and should all be treated the same.”

The notion of race is one that is being challenged internationally.

The science on this is clear – separate biological races do not exist among modern humans today, and thanks to intermarriage from the earliest of times, nor have they ever existed. In fact, the data shows that any two individuals within a particular population are about as different genetically as any two people selected from any two populations around the world.

That’s not to say that there are not significant differences between people – of course there are: hair, eye, and skin colour, facial features, height and a myriad of other physical and genetic attributes that makes each one of us unique. But there is no scientific foundation to the claim that separate races of human beings exist. Race nowadays is largely a social construct, based on self-perception.

As history has shown only too clearly, there is real danger in defining people by race as it opens up the possibility of granting privilege or discriminating collectively. Throughout the ages it has led to all manner of dreadful atrocities. So much so that after World War Two, the United Nations Educational, Scientific and Cultural Organisation (UNESCO) drew together an international panel of anthropologists, geneticists, sociologists, and psychologists to investigate the concept of race. In 1950, they issued a statement, which included the following two points:

In the United States, after the war, Congress authorised the Department of Energy to analyse human genes in order to identify, among other things, whether radiation from the use of the atomic bomb had caused genetic mutation. Preliminary investigations led to the view that the best way to carry out the analysis was to map out the entire human genome in order to obtain a reference sequence.

This work eventually led to the establishment of the Human Genome Project, a thirteen year international effort, launched in 1990 and costing more than US$30 billion, to discover the complete set of human genes and their DNA sequence.

The project confirmed the early findings of UNESCO:

Many countries are now recognising the dangers of defining people by race and are eliminating the concept from their constitutional arrangements. Austria has rejected the idea of separate races, as have Finland, Hungary and France. Similar moves are underway in Sweden, and are also being considered in Germany.

In Fiji, all laws and conventions based on race – including separate electoral rolls and reserved seats in Parliament – have been abolished.

The reality is that these countries have now recognised that using race or ethnicity to differentiate the legal status of people collectively is unacceptable. People should be treated as individuals and it is up to a country’s political leaders to stand up against those who seek to impose racist classifications on their society in support of the equal value of all citizens.

As Professor Robert Wald Sussman from Washington University points out in his book The Myth of Race: The Troubling Persistence of an Unscientific Idea, proponents of race-based policies have deluded the public into believing their fallacies because “many of our basic policies of race and racism have been developed as a way to keep these leaders and their followers in control of the way we live our modern lives”. He explains that many such leaders see themselves as “the best and the brightest”, clearly believing that they have a right to hold power and rule.

When you think about it logically, it is pure madness, that in this country of four and a half million people from over 200 different nations, we have allowed a minority of supremacists with powerful allies in government to hold us hostage to racism and separatism.

In New Zealand it is citizenship, not race, that should be our defining feature.

Meanwhile, the bicultural elite continue to push further and further down the path towards unearned privilege and racial supremacy. If their demands are successful this year, not only will the National Government enable the race-based control of New Zealand’s fresh water supplies, but through their Resource Management Act reform bill, they will also put in place a framework to enable the race-based co-governance of local authorities.

These changes are likely to further escalate the growing public concern over the direction the government is taking the country.

In his article about Sweden, our Guest Commentator Fraser Nelson wrote that the failure of the government to change their immigration policy to address the migration crisis, created a backlash, with critics denigrated and labelled as “neo fascists”.

Here in New Zealand, those raising concerns about issues related to biculturalism are denigrated and called “racists”. The irony is that it is the biculturalists, who are defining people by race, and undermining the democratic principle that all people are equal, who are actually the racists.

Fraser went on to say that the Swedish Government’s failure to address the deep seated and growing immigration policy concerns, in effect handed “entire sections of the electorate on a plate” to the opposition.

When something similar happened in New Zealand in 2004, in response to the fact that the Treaty of Waitangi claims process was escalating out of control and creating widespread public alarm, all it took was one powerful speech on ‘Nationhood’, by Dr Don Brash to change the political balance of power.

At the present time, no politician appears prepared to stand up against the powerful vested interests that are driving the biculturalism agenda.

But are they pushing the country too far? Will their demand for control of our nation’s fresh water be the straw that breaks the camel’s back?

Only time will tell.

Would you like to see the government continue to strengthen bicultural policies in New Zealand, leave them as they are, or abolish them?