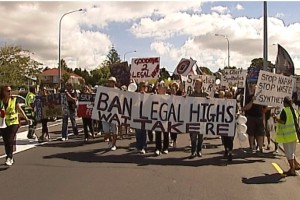 There are many forces that influence policy development in New Zealand, and prime amongst them is public opinion. If anyone had any doubt about that, the recent decision by the government to withdraw all legal highs from sale, can be directly attributed to the strong action of citizens.

Concerned about the impact these substances are having on young people, community groups up and down the country have been engaged in on-going protest action. With the help of the media to highlight their concerns, the pressure on the government to take action has been growing. With the issue no doubt registering strongly in National’s weekly public opinion polling, their response has been swift. A law change is expected to be passed under urgency, once Parliament resumes next week. All temporary approvals for psychoactive substances will be withdrawn, which means that no legal highs will be available for sale until they have undergone proper testing to demonstrate they pose no more than a low risk of harm.

The government’s Psychoactive Substances Act was passed in July last year, to ensure all legal high products meet appropriate safety requirements. A Psychoactive Substances Regulatory Authority was established within the Ministry of Health, to regulate the importation, manufacture and supply of psychoactive substances, which are the key ingredients in legal highs.[1] As a result of the law change, the number of party pills, synthetic cannabis, and other legal highs on sale has been dramatically reduced from around 300 to 41.

Since July, the Authority, which is in the process of developing Psychoactive Substances Regulations, has revoked approvals for five products that the Centre for Adverse Reactions Monitoring and the National Poisons Centre had found were causing adverse reactions, including nausea, vomiting, insomnia, acute psychotic reaction, and prolonged withdrawal.

The Authority is also responsible for licensing importers, researchers, manufacturers, wholesalers and retailers, and has reduced the number of retail outlets from three to four thousand to 153. Dairies, grocery stores and service stations have been excluded, leaving adult stores and specialist outlets – all locations are listed on their website HERE.

The Act also encourages councils to work with their communities to develop a ‘Legal Highs Policy’ in order to determine exactly where these licensed retail outlets can be located. Many councils are going through that process at the present time.

With a smaller number of readily identifiable retail outlets selling psychoactive products, and the loitering and anti-social reactions of users plain for all to see, community concern has been growing to the point where the Minister was forced to announce that all current exemptions will now be revoked. That means that all substances will need to go through a testing regime that is expected to be similar to the process used for medicinal drugs – taking years and costing several million dollars.

In other words, the force of public opinion has shaped policy on psychoactive substances to the point where it is expected that communities will no longer have to deal with problems relating to legal highs for some years to come.

Another major force that drives public policy in New Zealand is advocacy groups. One of the biggest and better known is the trade union movement. As at 1 March 2013 there were 138 registered unions with a total membership of 371,613.[2] Unions are well resourced and can be exceedingly aggressive in their push for worker rights. The Public Service Association, which is the country’s biggest union with 58,500 members, has an annual income of around $20 million. Some unions are vehemently anti-business, even though workers clearly need businesses for the jobs they create.

What the unions usually fail to acknowledge is that businesses are based on the innovation and risk-taking of the business owner, and – most importantly – the partnership that is developed with staff. In a competitive labour market, most businesses will reward good workers as well as they can – knowing that if they don’t look after their staff, they risk losing them. Over time, it is not uncommon for many staff members in very successful businesses to become extremely wealthy as a result of the vision and commitment to employees of their boss.

The union movement has a strong hold over national politics in New Zealand now that they have a direct hand in choosing the leader of the Labour Party. In the Labour Party primary last year, where the contestants David Cunliffe, Grant Robertson, and Shane Jones were vying for the top job, the union movement’s overwhelming support for David Cunliffe was instrumental in him winning the Party’s leadership vote. This has led to legitimate fears amongst the wider public that David Cunliffe is the puppet of the union movement. This concern was no doubt instrumental in the decision by MP Shane Jones to quit Labour and politics – for now. [Over on 5PM we are speculating that he’ll be back, but next time to sit alongside Winston Peters – see HERE]

Many advocacy groups in New Zealand push the socialists’ agenda of stronger government and higher taxes – no doubt in the belief that people can’t be trusted to run their own lives without the intervening hand of state control. Socialist thinking is behind much of the current debate over child poverty in New Zealand, with the taxpayer-funded Office of the Children’s Commissioner playing a leading role. Under the present commissioner, that office is giving weight to preposterous claims that over a quarter of Kiwi children are living in poverty. While many families with children are experiencing hardship – especially those dependent on long-term welfare – this is not true ‘poverty’. Abject poverty is when someone is genuinely without the necessities of life (food and shelter – not Sky TV!). New Zealanders are fortunate in that government social services are available to help families in desperate need, ensuring that in this country there is no real poverty.

Many of the lobby groups that operate in New Zealand are focussed on trying to bring about changes to public policy that will benefit their supporters. When formal communication channels are forged between the lobbyists and the government – such as the regular meetings that are now held between Cabinet and iwi leaders – disproportionate benefits will often flow to those groups, leading to claims that the government has become captured by vested interests.

Think Tanks also have an important influence on public policy. By promoting ideas that are in the best interest of the country as a whole, Think Tanks like the New Zealand Centre for Political Research are able to help shape the future direction of New Zealand. The NZCPR operates by providing research and expert commentary on topical public policy issues on a weekly basis to inform public opinion and influence policy makers. Initiatives like petitions are also provided, to focus support on particular aspects of public policy – like the two petitions that are presently running, to abolish the Maori seats HERE, and to protect private property rights HERE.

The NZCPR also runs public information campaigns – like last year’s successful Independent Constitutional Review campaign to oppose a Treaty of Waitangi constitution, that was based on the publication of high-impact advertisements in the country’s leading daily newspapers. At the present time we are testing the waters to see whether there is sufficient support for a public information campaign against climate change scaremongering, based on the paper we recently published by Dr David Kear, the former Director General of the DSIR (see HERE) – if you think such a campaign has merit please email me HERE.

In particular, the NZCPR believes that informed citizens are at the heart of a well-functioning democracy, and we encourage supporters to share the ideas in our newsletters and the wealth of material on the NZCCPR.com website as widely as possible through communicating with others – including Members of Parliament (a Quick MP Email facility can be found on our website HERE) – writing letters to the editor, calling talkback radio, and engaging with social media.

Another Think Tank that punched above its weight with its excellent work was the Centre for Resource Management Studies. The CRMS was run by Owen McShane, who died suddenly and tragically just over two years ago. As many of you will know, Owen had spent a lifetime researching, advocating, and thinking about communities, planning, and resource management.

He was an outspoken critic of radical environmentalism – another of the forces that shapes public policy in New Zealand. Driven by extremely well-resourced lobby groups like Greenpeace and the Environmental Defence Society, Owen saw first hand the damage to communities caused by planning laws made overly-restrictive by environmental advocates.

He concluded that as far as local government is concerned, bigger is not better, that consultation through complex and impenetrable planning documents is not consultation at all, and that too many New Zealanders in influential positions have become captured by the socialists’ radical environmental agenda to the point where their advocacy for smart growth and their apparent loathing for humanity, is preventing development, pushing up land and house prices, and strangling growth.

This week, our NZCPR Guest Commentary is Why we have to learn to love Subdivision – Again by Owen McShane, in which he reminds us that secure, tradeable, private title – one of Western Civilisation’s greatest contributions to our wealth, health and general well-being – is now under threat from environmentalists:

“Many long-term employment opportunities are created by suburban residential development. It’s the land around the dwelling that enables so many of these projects to take place over the decades and to create so many jobs. If Smart Growth policies force people to live in apartments, their opportunities to improve their dwellings are seriously limited. While the economic and employment impact of rejecting large-scale developments is serious, the cumulative effect of a multitude of prohibitions is equally serious – especially to a small economy.

“During the nineteenth century the key function of governments in the New World was to churn out titles as quickly as possible. Surveyors were the true frontiersmen, enabling the migrants to arrive, put down their roots, and build. The post-war suburban boom repeated this experience, supported by an equal enthusiasm for creating a property owning democracy.

“Then during the 1990s, ‘The Age of Environmentalism’ persuaded decision-makers in the developed world that the creation of titles enabled polluting humans to possess the Earth Mother and must be stopped, or made as difficult as possible. Instead of encouraging the creation of titles, as history suggests we should, the Smart Growth central planners have persuaded our governments to penalise the creation of new lots by imposing highly expensive and highly regressive fines called ‘development contributions’ – which are actually anti-development levies. These constraints on land supply created the short-term property boom, and the inevitable bust that led to the greatest financial crisis in recent history.”

We would like to take this opportunity to remind readers about the wealth of material produced by Owen McShane. We have created a permanent link on our website – just click the ARCHIVE button on the navigation bar of NZCPR.com and you will see the Owen McShane Archive link to more than 500 articles. Many of these have a timeless quality, and from time to time, we will feature them as guest commentaries in Owen’s honour.

Do you support the government’s plan to withdraw all legal highs from sale?