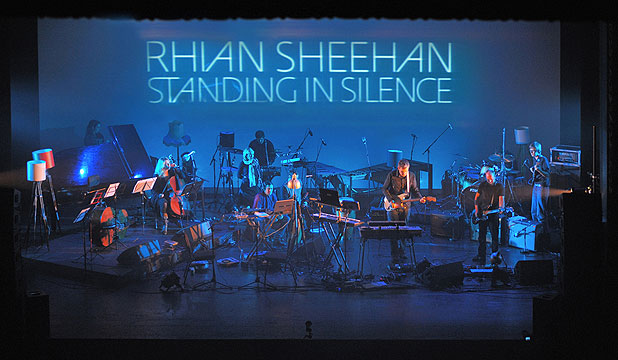 I sat down with Rhian to discuss the inspiration behind his latest record, recording woes and the state of New Zealand music...

When did your relationship with music begin?

The first time I heard Starman by David Bowie, I was 5 years old. Then I think I heard Blackbird by The Beatles. They were the earliest moments I can remember being moved in some way by music. I probably picked up a guitar at age 13.

Your music has been described as a synthesis of analog and digital - man meets machine. Do you prefer working with electronic production tools, or traditional instruments?

My older albums were on a far more electronic tip, but as I’ve aged my tastes have changed substantially. I like the idea of creating sounds and sonics from real instruments that are hard to pinpoint as either “electronic” or “real”. I mainly use electric guitar to come up with textures, as well as children’s musical toys, outboard effects etc, but obviously I use computers to manipulate, record on and write String arrangements etc. A computer is still most definitely the heart of my studio.  My latest EP “Seven Tales of The North Wind” is the result of using real instruments rather than electronic sounds. And the result I think is more organic sounding.

Describe your inspiration for Standing in Silence.

Travel. The album was born from field recordings after a 3-month trip to India and then Japan. The cover photo was also a catalyst in its creation. I took the shot on the outskirts of Delhi a few years ago. The image seemed to tell the story I was after. It all seemed to flow on from there.

Who (or what) do you consider your greatest musical influences to be?

What is your favourite album released in 2011 so far?

To be honest I’ve haven’t really found anything that’s blown me away so far this year. I guess the last album I thrashed was Jonsi’s Go. I’m on the search all the time though! I’ve been listening to lots of Chet Baker recently.

What do you think of the current state of the NZ electronic music scene?

I don’t really feel that in touch with a scene. I don’t often play gigs, and don’t listen to too much electronica music myself. My day job is writing for film, TV and multi-media projects, so I pay more interest to film composers I guess.

Who deserves less attention out there in the music world?

Your sound is extremely eclectic, and very difficult to taxonomize. How would you personally describe or define it?I guess “experimental cinematic musings” might sum my more of my recent work up. I’m always trying to push myself and figure out new recording techniques and ways to manipulate sound, it’s a constant learning process for me.

Recording a concept album like Standing in Silence could have potentially been very difficult - tell us about your best and worst recording experiences?

Recording the album was fun, but I never sat down and wrote all the pieces in one cohesive 14 Part go. My process is one of trial and error. So I probably had 30 or 40 sketches before I ended up solidifying them all down into an album that worked as a whole. After spending much time in India I had become very interested in incorporating a more “World” (I hate that term!) sound into my music, but in the end this direction didn’t make sonic sense. The album really came together after working with Jeff Boyle (Jakob). I think his sound became the glue that locked the Parts together.

What does the future hold for Rhian Sheehan?

I’ve just finished writing a score commissioned by the UK Space Agency (I’ve written a few Planetarium Space Dome film soundtracks over the last few years) and am currently working on a few short film and TV documentary projects. I also have another full-length album simmering away.