New Zealand has never been short on innovators and this year a Kiwi brewmaster and engineer launched the world’s first personal brewery to much international acclaim and interest.

Ian Williams began his brewing career at 21 when he graduated from Massey University with a degree in Food Technology and a desire to make the amber nectar. 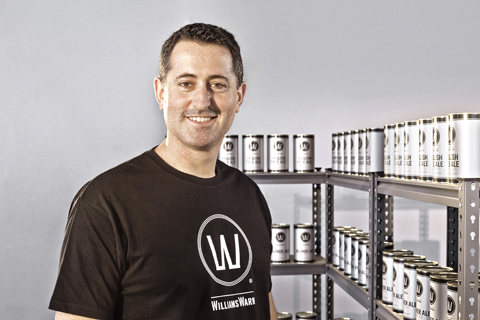 He spent 5 years at Tui Brewery in Mangatainoka, learning his trade and became the first New Zealander with a proper brewmasters qualification, the Diploma Master Brewer from the Institute of Brewing, London.

He then went with Asia Pacific Breweries (who own DB Breweries) to Singapore and then helped start-up of green-field Brewery in Hainan China for 4 years. He was in charge of beer quality and after 16 months of production they won the prestigious World’s Best Lager trophy at the Brewing Industry International Awards in London in 1998, beating 188 other international brands. 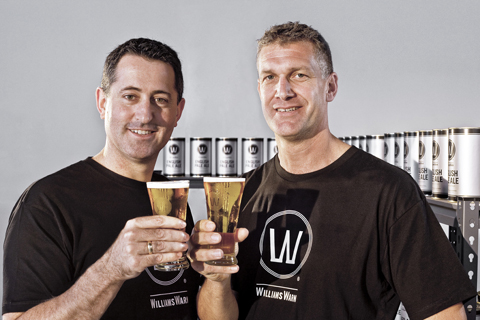 In 2000, he became a brewing consultant based in Copenhagen, Denmark, travelling all over the world for the next 6 years, visiting breweries and helping improve their beer quality.

When not travelling he ran the world’s most respected independent beer tasting panel at Alectia in Denmark, tasting over 3500 beers under scientific conditions during his stay there.

In 2004, whilst on holiday back in NZ, his Uncle Wayne Williams asked Ian why no one had tried to solve the problems with homebrewing. That single comment sent Ian on a journey of analysis, where he realised there was a huge opportunity to provide the means for people to make commercial quality beer at home.

He returned to NZ with family in 2006 and has worked on this project ever since. On April 8th, after almost 7 years of development, The WilliamsWarn Personal Brewery was launched. It’s a state of the art, all-in-one appliance that allows the user to make top quality draft beer in 7 days. And it’s a world first. 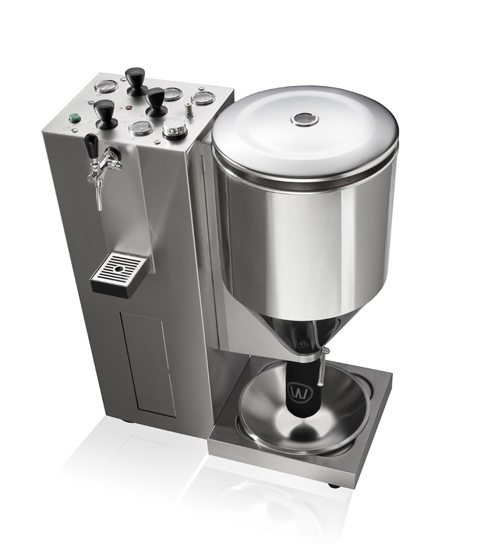 You launched in April this year after 7 years development– what sort of response have you had since then? It’s been amazing. We’ve had over 150 offers for distribution from

more than 40 countries in the first 8 weeks - from companies and individuals who think the product is so good they want to be the sole distributer. The common requests are from the US, Canada, Australia and Brazil, but we’ve also had lots of requests from Romania, Iceland, Malta, Singapore and other smaller countries.

We’ve had more than a hundred orders for WilliamsWarn’s from overseas, even though we clearly state on our website that we aren’t going global just yet, becausewe’re validating the product in NZ first before going off-shore.

We’ve also had more than 150,000 people visit the website in this short period of time which is a pretty good start for a product with no advertising.
If you googled us before April 8th there were 0 hits but soon after it was 120,000 hits. Our photo and videos have been embedded in many sites around cyberspace.

How do you explain such a great international response?

Beer accounts for 3% of all liquid consumed on the planet. It’s a US$330 billion per annum market. In this country, one third of all men have tried homebrewing and quit the hobby. That’s an enormous statistic considering the global value of the product. I analysed why they quit and found 12 main problems and have solved them all with this invention. That intrinsic desire for men to make real beer at home or work is always there has never left them, and when they see this product they realise they now have the opportunity to do it properly, without the disappointment. So that latent desire is being rekindled when they see what we’ve made. We’re selling the ultimate boys toy.

What media outlets have shown interest?

The US media have shown a good interest, so we’ve got into magazines like Cigar Aficionado and Men’s Journal USA. Popular Science is doing a big article on it in August and that’s exciting as they have 7 million readers. Brazilian TV is flying a technology team out here in August too. Playboy magazine have asked for an interview. NBC asked for permission to use our video. So all quite exciting.

In New Zealand we’ve had a fair bit of coverage but could always do with more.  We’ve been on TV a few times and in a few magazines. 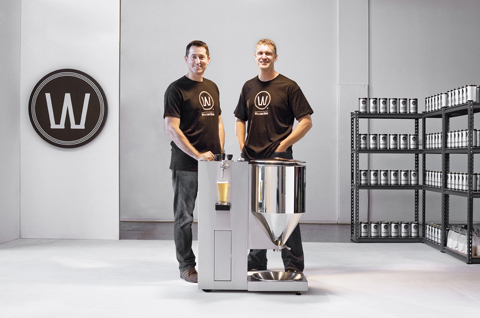 What skills that you learnt in full-scale brewing have you had to use to develop brewing on such a small-scale?

Great question. I’ve always been a quality guy in brewing, except when I was helping build a brewery here and there. So I wanted the beers I made in my Personal Brewery to match the methods and results of professional brewers. So from my knowledge as a qualified brewmaster, my 20 years working in 60 breweries in 20 countries, my knowledge of how I made the Tiger beer that won the world champs in 1998 in London, as well as my experience as professional beer taster in Denmark, I made beers on the small scale in the same way you would on a big scale. So the beers are all made in a stainless steel vessel, with proper temperature control, insulation, a means to naturally carbonate the beer within normal fermentation, a means to clarify while under pressure, a means to remove the sediment from the beer, and a means to dispense the beer once made. The fermentation rates, yeast growth, pH, temperature all match proper brewing methods.

What’s the biggest advantage of your system?

All homebrewers make flat beer, then need an extra, time-consuming carbonation step to gas the beer up. The crazy thing is that during the fermentation the yeast actually makes 10 x the carbon dioxide you need. Homebrewers let it all go to atmosphere through an air-lock and then have to put some back in. This is the No.1 problem of homebrewing. It’s a 2-step process and you could never have an appliance while needing two separate vessels to do the job - it’d be like having to have 2 microwaves or 2 vacuum cleaners to do what we do with one. So what we’ve done is enable the fermenter to be a pressure vessel, so we can trap the gas we need and let the excess go. So the carbonation occurs in the first 24 hoursand we don’t need to bottle the beer and wait 6 weeks for it to gas up in a 2nd fermentation in bottles. Since we control the temperature as well and clarify under pressure, we can be making beer in 7 days rather than 7 weeks. Plus its tastes better because we haven’t oxidised the beer during the transfers homebrewers and even full-scale brewers do and we have no dead yeast at the bottom of the bottles. Our beer is actually the freshest beer in the world with respect to the science of beer staling because we have 20 times less oxygen pick-up than a full-scale brewery and probably 100 times less than a homebrewer.

What new skills have you had to learn to start-up the company?

That’s been a steep learning curve indeed. I’ve had to help develop the machine with designers and source parts locally and from overseas. I’ve had to find a manufacturer here in NZ and work with them. I’ve had to work with brand designers and develop a brand. I’ve had to work with web designers and develop the e-commerce website. Then there are the lawyers and the shareholder agreements to write. There are the accountants and tax and the company register to take care of. Then there’s pitching to investors and the power-points and trying to sell your vision to people that may invest in the business. There a patents to write and patent attorneys to work with. Then there’s PR and sales and promoting the product. There’s also the showroom and warehouse and the sending of products to clients. So there has been a lot to take care of, other than the brewing R&D itself.

What’s been the hardest part so far?

My wife and I spent all our money on this so that financial stress has been very tough. The set-backs you have with parts, suppliers and timing also knock you back. I’ve really felt the stress, I have to admit. 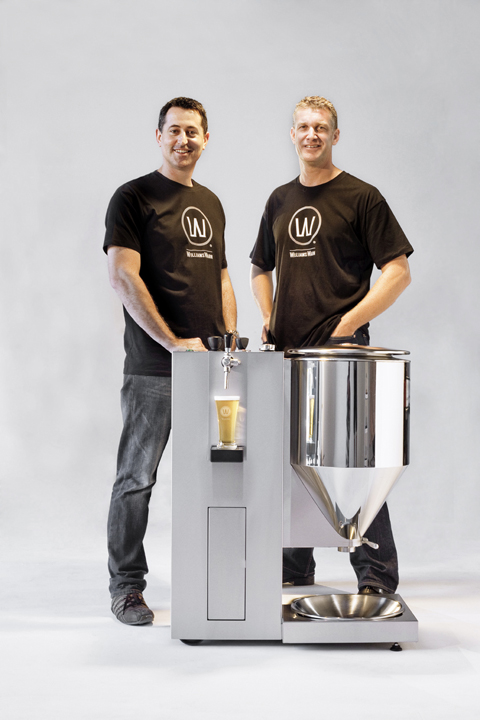 How do you handle the stress?

I try and stay aware of my negative thoughts and not let them run away on me. It’s not easy when things aren’t going your way and costs and schedules blow out and you have to find money and solutions. But there’s no choice. Happiness occurs in the mind and so you always have the option of maintaining happiness while weathering the storms, although I can’t say I’ve succeeded in doing that the whole time, 50% of the time maybe. I try and read books by inspiring people. It seems that everyone struggles in life so it helps to know that the people who have done something meaningful with their lives have all had to fight for what they wanted to achieve. So I take comfort in knowing I’m not the only one out there who finds building a business hard – it’s normal – and I just carry on.

Who are buying your Personal Breweries?

So far it’s been companies buying them for Friday night drinks, team building and to bottle the beer as gifts to clients, as well as to save money on beer. There’s a payback time for companies since the beer is 3 times cheaper to make in our units than to buy. Then there are the individuals who just want to make beer themselves that they can be proud of, rather than homebrew that’s avoided by their mates. Chefs, cafés and restaurants have also shown an interest.

What does the future hold for WilliamsWarn?

Right now we’re busy validating the product in New Zealand. So I’ve been making beer with the guys and companies who have bought the first units. It’s been great finally get to do that.

So far it’s generally positive although there are a few things to iron. The beer is fine and everyone is satisfied with what gets poured out of the draft beer tap after the 7 days of processing, which is the main thing.

We’ve just finished a business plan with Deloitte and we’re looking for investors to help us get to Aussie, the UK and the US. We need capital to expand and we’ll need partners in each country we enter into, so finding them will be important.

Then there’s further development of the beverages that can be made in the machine which I’m itching to progress with, which include all 80 beer types, cider, mead, sparkling wine, gluten free beer, ginger beer and other products.

So the future is a global community of brewers enjoying making beer and other beverages in their own personal brewery and sharing it with their work colleagues, clients or mates.