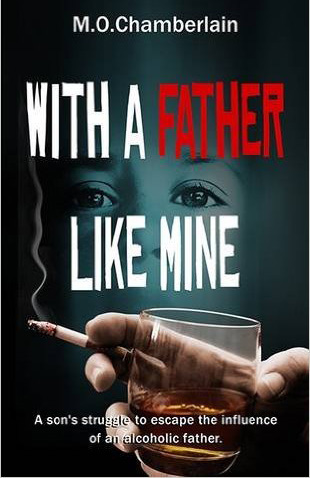 With A Father Like Mine is really honest but it is NOT a misery memoir.  Mark Chamberlain tells the story of life as the son of an alcoholic but not in a way that brings the reader down. Excessive drinking is a serious issue and it is a sad story in some ways but he manages it so well and interspersed with stories of his amazing life you don’t feel down.  It’s not until you finish the book that you actually realise to phenomenal effect that early childhood had on his life and his close childhood friend who had a similar life went completely the other way so you get that incredible contrast as well.  It’s an amazing read with some very confronting messages, very topical ones in our current climate.

Every partner, parent, friend who thinks they or someone they love drink a bit too much should read this book.

‘After the international success of Once Were Warriors many people have assumed that alcohol abuse and violence are problems that impact primarily  indigenous families.  This book shows that the descendants of respectable Irish and English pioneers can be just as vulnerable.’

We are constantly talking about our drinking culture and about breaking the cycle but it’s not about just breaking it, it’s about dealing with the effects as well. Every now and then a story surfaces that reminds us how important it is and how destructive this lifestyle can be to the whole family. Mark Chamberlain’s story is one of those.

Mark was the son of an alcoholic.

He had a great life, he’d broken away from the cycle, married, had a family, travelled, had an amazing wife, lovely children and grandchildren.

He was a high achiever. An award winning author, his writing presentations for teachers have featured in conferences both in Europe (ECIS) and the Middle East (TARA) and (NESA), he has presented as an author in international schools in the Middle East, New Zealand and Australia, he’s no slouch!!!

Well he thought he broke away. But all the while ‘that’ part of his life was just parked.

In his 60s Mark finally realised that his father’s drinking had actually affected him all his life and he was still struggling to deal with it, so it was time to do just that

With a Father Like Mine is a book that will stir the soul and provide inspiration and a ray of hope to all those suffering from family addiction.  It’s not a dour misery memoir that will have readers reaching for the closest razor blade. Matt Turner, author of Rail: 150 Years of Rail in New Zealand sums it up

– ‘Engrossing. Chamberlain writes fluently and has an ear for what is entertaining. . .He knows how to hustle the narrative along. It certainly is a rattling good read.’

It is a story that everyone who has to deal with addiction should read.

This is one of Mark’s reflections after writing the book.

Well, I’ve finally done it. Broken that silence and talked about being raised in an alcoholic home. It wasn’t easy. Right up to the moment the book went to press, I wanted to take my finger off the trigger, put the gun away and let someone else fire it when I was gone. But it’s out there now, and I’m feeling edgy, waiting. I feel it on so many different levels.

All of Dad’s immediate family have gone. Still not everyone who thought my father a wonderful man has gone. I can think of at least one, a formidable adversary, who might take offence.

And my siblings? Can they handle the truth, my version of the truth? That Irish pride keeping matters of shame secret may well be incited. I can only hope those annoyed react as Dad would have reacted. The silent treatment. I can handle that. But angry abusive phone calls. Nasty emails. Mmm. Con fortare esto vir.

In some odd way, their verbal abuse would carry the voice of my Dad. Even now, forty-five years since I left home, I feel a burden of fear talking about my father’s drinking. Is it that I’m afraid he will somehow find out and confront me? Afraid those aligned with him will take punitive measures on his behalf? Is the little boy inside, not yet completely assured?

As children we had a conspiracy of silence. We did not complain, and we certainly did not talk of my father’s drinking with others. Absolutely taboo. Because we didn’t want anyone to think something was wrong. Were we really protecting Dad?

And as adults, long after he has gone, we still keep the secret from others. For me, the truth is I was protecting myself. I didn’t want others to know my old man was a hopeless drunk, a man who had died penniless in a run-down boarding house. I didn’t want people to think there was something wrong with me by association. My pride kept Dad’s alcoholism private, lest others thought less of me, looked for signs of dysfunction and held reservations about my worthiness. And that is the main reason I have been afraid to tell the story. Afraid too of the anger others close to him will feel should my revelations arouse that same fear.

But, “When you ain’t got nothing, you ain’t got nothing to lose” (Bob Dylan). And old age brings me closer to that moment when I ain’t got nothing in this world to worry about. Closer to not giving a hoot what others think because in the end being precious and private about a story that can benefit others is selfish. The ridiculousness of my ego is beyond measure sometimes. I see it in others too. Guarded and secretive about their lives lest others discover they and their family are not perfect. The scandal of it all! When in reality no one really cares and all I’m  doing is depriving someone of a good story they could have gained from.

Stephen Pokere, All Black, in addressing a group of Northland children about drug and alcohol abuse once said, “I never used drugs. A wise man learns from his mistakes. A wiser man learns from the mistakes of others.” In that spirit, I’ve given up my Irish pride and laid it all out there in the hope someone learns from my mistakes and those of my father’s.

Back now, grateful for having been given an angel to do it with, because I certainly needed one.

GetFrank is pleased to offer our viewers a chance to win a copy of "Father Like Mine",  $32.99.

To enter, simply comment below then head over to our Love & Relationships Forum to make a decent contribution to finalize your entry. Make sure you check out next weeks Newsletter to see if you're one of our winners.