Win So You’ve Been Publicly Shamed by Jon Ronson $34.99 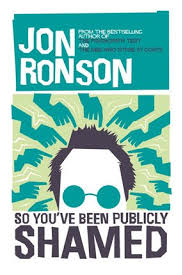 So You’ve Been Publicly Shamed by Jon Ronson

An eye-opening book about the phenomenon of public shaming, often delivered from anonymous or distant sources.

In 2012, Jon Ronson's online identity was stolen. Jon publicly confronted the imposters, a trio of academics who had created a Jon Ronson Twitter bot obsessed by unlikely food combinations and weird sex. At first, Jon was delighted to find strangers all over the world uniting to support him in his outrage. The wrongdoers were quickly shamed into stopping. But then things got out of hand. This encounter prompted Jon to explore the phenomenon of public shaming and what he discovered astonished him. As he meets famous shamers and shamees, Jon learns just how quickly public ridicule, often delivered from anonymous or distant sources, can devastate its victim. After our collective fury has raged with the force of a hurricane, we forget about it and move on, and it doesn't cross our minds to wonder what we've done.

How big a transgression really justifies someone losing their job? What about the people who become global targets for doing nothing more than making a bad joke on Twitter, do they deserve to have their lives ruined? How is this renaissance of shaming changing the world and what is the true reason behind it?

Simultaneously powerful and hilarious in the way only Jon Ronson can be, So You've Been Publicly Shamed is a deeply honest book about modern life, full of eye-opening truths about the escalating war on human flaws – and our very scary part in it.

GetFrank is pleased to offer our viewers a chance to win a copy of "So You’ve Been Publicly Shamed" by Jon Ronson $34.99.

To enter, simply comment below then head over to our Current Events & Sports Forum to make a decent contribution to finalize your entry. Make sure you check out next weeks Newsletter to see if you're one of our winners.