Win Florence + The Machine How Big, How Blue, How Beautiful 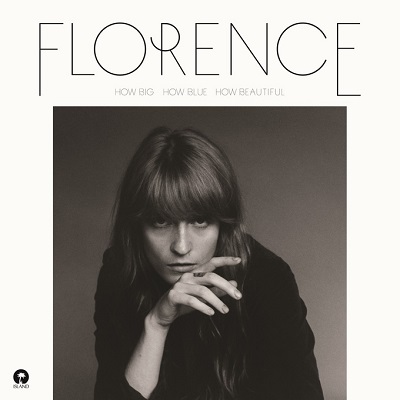 For Florence Welch, the success of her first two Florence + the Machine albums Lungs (2009 – Album of the year, Brit Awards 2010) and Ceremonials (2011) meant five years of back-to-back recording, promoting and touring. Lungs ran straight into the making, promoting and touring of the Grammy-nominated Ceremonials, an album written while on the road and recorded straight after coming off tour. The shows were getting bigger, the hair redder, the success wider and wilder.

A pop star at 21, with two international hit albums behind her, Florence discovered that in giving seven years to her music, some elements of real life had been left by the wayside. Coming back from tour and moving out of her mother’s Camberwell home, Florence re-engaged with normal life: going out, falling in and out of love, and simply trying to learn how to look after herself outside of the hermetic bubble of life of the road.

“It was sort of a crash landing” Florence freely admits, “I guess although I’ve always dealt in fantasy and metaphor when I came to writing, that meant the songs this time were dealing much more in reality. Ceremonials was so fixated on death and water, and the idea of escape or transcendence through death, but the new album became about trying to learn how live, and how to love in the world rather than trying to escape from it. Which is frightening because I’m not hiding behind anything but it felt like something I had to do.”

And so the new Florence, and her songs, started to swim into focus.

The result is How Big, How Blue, How Beautiful, a collection of songs, written and recorded over the course of 2014. Produced by Markus Dravs (Björk, Arcade Fire, Coldplay) with contributions from Paul Epworth, Kid Harpoon and John Hill, the third album by Florence + The Machine is live-sounding, tune-rich, unhinged in all the right places and powerful in all the best ways. In voice and, ultimately, outlook Florence has never sounded better.

“Markus has done a few Arcade Fire albums,” Florence tells us, “and he’s done Björk’s Homogenic, which is a huge record for me. And I felt he had that balance of organic and electronic capabilities, managing those two worlds. And, you know, he’s good with big sounds. And l like big sounds. And he’s good with trumpets, and I knew I wanted a brass section on this record,” she adds of a group of musicians who were arranged by Will Gregory of Goldfrapp.

“And with Markus,” Florence continues, clarifying, “I wanted to make something that was big but that had a gentleness to it. That had a warmth, that was rooted. I think that’s why we went back more to the live instruments. Something that was band-led almost.”

A prime example is the future Florence classic ‘Ship To Wreck’: it opens the album, and showcases Florence and Dravs’ enthusiasm for reframing her distinctive voice.

‘Ship To Wreck’ was written with Kid Harpoon, the London-based songwriter/producer with whom she’d written Ceremonials’ Grammy-nominated ‘Shake It Out’, during a month-long creative furlough in Los Angeles that also yielded first single ‘What Kind Of Man’: a full-force ear-pinning anthem of uplifting defiance.

Kid Harpoon is one of a clutch of old collaborator friends who reunited to help marshal these most personal of songs. Ceremonials producer Paul Epworth helped create the album closing psychedelic blues explosion Mother, while the inner-circle of her nearest and dearest was rounded out by her bandmate and long-time studio right-hand-woman Isa Summers, with whom she wrote the epic title track.

“How Big, How Blue, How Beautiful was the first song I wrote for this record, literally as I just came off tour, “ she explains, “and then I went off and had this incredibly chaotic year, and that all went into the record. But in the end, the feeling of How Big How Blue is what I came back to.”

GetFrank is pleased to offer our viewers a chance to win a copy of "Florence + The Machine How Big, How Blue, How Beautiful".

To enter, simply comment below then head over to our Love & Relationships Forum to make a decent contribution to finalize your entry. Make sure you check out next weeks Newsletter to see if you're one of our winners.