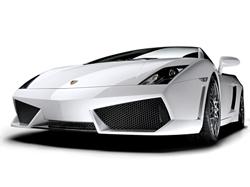 Lamborghini's top-selling Gallardo gets more power and handling... so it wasn’t powerful enough or quick enough, or good-handling enough already?

Italian supercar manufacturer, Lamborghini, has released a developed successor to the Gallardo, its most successful model yet – Lamborghini has sold 7100 since its launch in 2003.

The new model, the Gallardo LP560-4, gets a new engine and new suspension which Lamborghini says gives it “clearly improved performance and dynamics.”

Lamborghini boss, Stephan Winkelmann, is being no shrinking violet when assessing the new supercar’s chances. “[The LP560-4] will outclass its predecessor in every aspect; its dynamics are distinctly breathtaking and its design sets new standards.

“With the introduction of the Gallardo LP560-4, we will consistently continue Lamborghini’s growth strategy.”

Lamborghini says that despite the increased power, fuel consumption and CO2 emissions have been reduced by 18 per cent. Traction, handling and stability at high speeds have all been improved. The redesigned four-wheel drive, new suspension, optimised aerodynamics, reduced weight and decreased friction between components all helped.

Lamborghini says its trademark is an elegance composed of stark, purist strength which is reflected in the LP560-4’s “precise lines and clean surface edges” which combine in a “distinctly minimalist” look. “Ornaments or embellishments of any form are alien to it.”

The new headlights have a daytime running light integrated beneath the Bi-Xenon lamps; 15 light-emitting diodes (LEDs) have been positioned in a Y structure. The same motif appears in the taillights.

The rear lights, air cooling vents, bumper and diffuser are arranged in precise positions on the car’s exterior, and make the LP560-4 appear extremely wide and bonded to the road surface. The rear diffuser is more efficient than its predecessor’s and, together with the smooth underbody, contributes to excellent steering stability even at extremely high speeds.

A rear-view camera is integrated in a small fin in the independent rear spoiler.

Bodywork is now made of aluminium rather than  steel and the body is much lighter but stiffer.

The car is built around a spaceframe, with integrally moulded nodes and extruded parts creating its frame. Sheet aluminium forms the body. 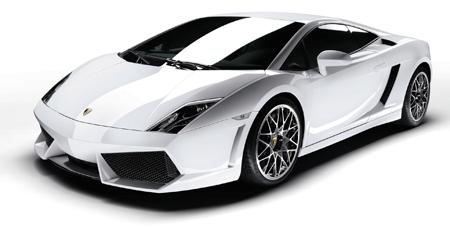 Engines and technical stuff: power is the word

All that remains of the original V10 is the number of cylinders. The 5204cc motor develops 540Nm of peak torque at 6500rpm. The torque curve is wide.

The V10 is mounted lengthways in front of the rear axle (Italians call it Longitudinale Posteriore).

The LP560-4 has a 43/57 per cent front/rear weight distribution. In combination with the permanent four-wheel drive transmission, superior driving stability and roadholding are guaranteed in all situations.

The crankcase is aluminium alloy; the cylinder liners are exposed to hard silicone crystals during production and are bored directly out of the material. The conrods are wrought steel and the pistons aluminium alloy.

The engine is unusually wide for a V10, with a cylinder angle of 90 degrees, giving a low centre of gravity which is enhanced by the dry sump lubrication system. 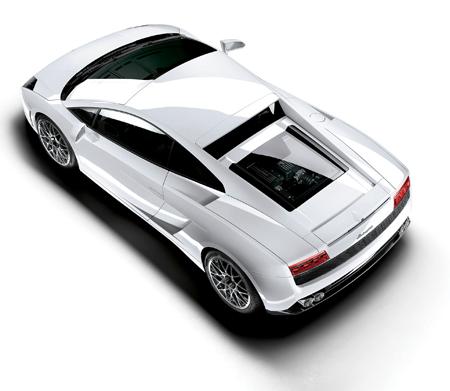 The four-wheel drive Viscous Traction (VT) system is indicated by the 4 in the car’s model name.

The central viscous-coupling requires no electronic control; the torque is distributed between front and rear – generally with a 30/70 front/rear ratio and, within milliseconds, adapts to even the slightest variations in road conditions.
A mechanical differential on the rear axle provides up to 45 per cent limited slip and an electronic differential lock at the front completes the four-wheel drive system.

Drivers can choose whether to change gears manually through the gate guides of the six-speed gearbox using a short gear stick, or by fingertip control of the e.gear’s paddle-shift system located behind the steering wheel. The e.gear transmission has been completely redesigned and improved and is lighter. It cuts the shift time by 40 per cent in Corsa (racing) mode.

The driver chooses among five different driving and changing programs. The Corsa program directs the engine to optimum acceleration, permitting a greater slip angle and also allows the full dynamism of the LP560-4 to be employed even on a racetrack.

The LP560-4 has 235/35 ZR19 front and 295/30 ZR19 rear P-Zero tyres, specially developed by Pirelli. They have a particularly low roll resistance, which also maintains tyre wear at a minimum without reduction in their performance.

Optional Carbon Ceramic are available, 380mm front and  356mm rears. They deliver much improved performance at a reduced weight. In total, the CCB braking system is lighter in weight that, at the wheel, improves driving dynamics and comfort.

The inside story: luxurious interior 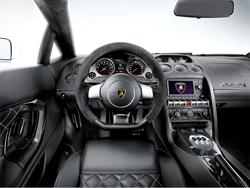 Despite its low exterior height, the Gallardo LP560-4 has a spacious interior.

The sports seats are covered with either fine leather or Alcantara and provide secure adherence and support. The seats are positioned very low. Space behind them complements the 110-litre front luggage boot.

Seven round instruments with new graphics provide the driver with essential engine data and a multifunctional display between the speedometer and tachometer relays important information.

The leather upholstery and trim can be lot ordered in several colours and stitching (also in contrasting colours).

The Ad Personam programme enables customers to create any combination of colour and trim, to achieve a highly personalised vehicle.