Jack Yan is the publisher of Lucire magazine, and an avid car enthusiast. 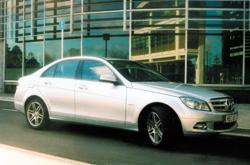 MERCEDES-BENZ’S Coby Duggan assures me that the C-Klasse gets flasher than this. He points out that the C200K Avantgarde that I am collecting does not have sat-nav, a feature that we were discussing only a year before.

Back then, Duggan told me that New Zealand was further down the pecking order as far as the Swabians were concerned in getting sat-nav for cars. But leave it to the Germans to impress you. They may say it’s low priority, which in German terms means that you get it on Monday rather than Friday.

Still, I was familiar enough with Auckland to not require it. It’s not as though I suddenly found myself teleported to the middle of Frankfurt—or had I?

There’s no denying that you feel that you are behind the wheel of a German car. Mercedes-Benz hasn’t stayed still since I drove this model’s predecessor in 2004: the company has seen how people admiring the interiors of Audis and has upped the quality. Finally, you feel that this Mercedes isn’t as tinny as the old W203 based on the sound of the doors shutting and the quietness of the cabin. This is not a Stuttgarter’s equivalent of a Ford Taunus.

However, there were a few odd things about the interior. There’s an awful lot of silvery aluminium between the dials, a place where I expected a dark grey or charcoal. I don’t need to feel like there aren’t enough dials, seeing all that metal there.

I can understand the logic: ah, the logic. The Germans. All the extra information m such as the clock or which gear I was in is now digitally displayed in the centre of the speedometer, so there is no need for all those dials. It is simplifying the cabin for a modern life that we all know has become too busy. And, hopefully, it will get us to concentrate on driving and enjoy the road.

The C is probably the first Mercedes-Benz that has had a unique ad campaign for New Zealand. Not only did Duggan hand me the traditional German brochure, I got a briefer one headed Love the Road, tying in with the Kiwi advertising. Never mind that the font is identical to that of the Warehouse’s slogan. And it might not matter: the C is priced to challenge BMWs and Audis and you might just be heading to Mercedes-Benz, where everyone gets a bargain, rather than Lexus, where everyone gets a Toyota.

This campaign underlines how important the C is. It probably hasn’t escaped the local HQ that the A4 is the topselling Audi in New Zealand. ‘How dare this front-drive sedan challenge the supremacy of Stuttgart?’ it will have asked. 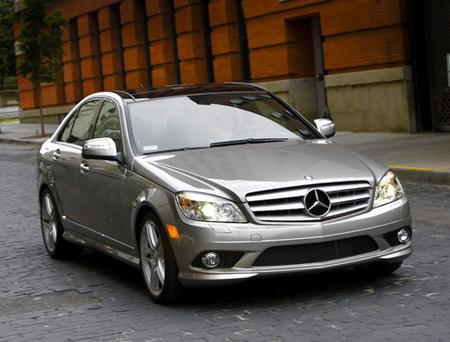 People are drawn to the A4 and the 3-series based on the promise of either fourwheel- drive capability or the over-engineering and wank factor. In this, Mercedes has found the C difficult to define. It’s a compact sedan that’s, um, smaller than the other Mercs. Except the A- and B-class.

However, this time Mercedes feels it’s on to something. This is a road-hugging, dynamic C. It has taken extra shots to make it a performance sedan. It has taken Vitamin C class. Mercedes-Benz has made quite a lot of play on how it has given the car a larger footprint and a wider track, and redistributed the weight so more of it goes rearward. In other words, the car should be better balanced.

And it is. Mercedes-Benz’s engineers have got it right on this aspect. The chassis is capable, as I found myself testing it on difficult roads to the west of Auckland city. It quietly copes with the twists and turns far better than the old C, which suddenly feels geriatric by comparison. You sense that the supercharger keeps the power up as the C200K soaks up kilometres on the motorway, making it a great cruiser, too. 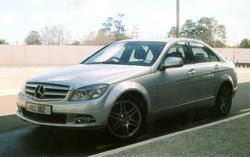 But one thing continues to let the C200K down: the gearbox. Shifts on the sequential ’box are still about as rapid as Helmut Köhl getting out of his limousine. It’s where Audi has Merc pipped, even if this car has the front-driver licked on overall dynamics and the chassis.

At the end of the day, however, people read this column not for horsepower ratings and they might not even care about the gearbox. The enquiry is still: does this car rate stylistically?

While out in the southern part of the city, I somehow found myself sitting behind an X-type Jag. You know, the one we don’t even mention when we compare compact executive sedans because it’s too lame to consider. The one that looks like it should be driven by Mrs John Prescott and not Sting.

I have a soft spot for the X. All the curves that were oh-so fashionable in 1968—let’s be fair, curves were also very “in” 10 years ago—suddenly looked old hat next to the creases and sharp lines of the C. It reminds me of those days when people were junking Mk II Jags because they weren’t razor-blade cool like the Fiat 130 or Lotus Esprit. Fashion has come back to that point in 2008 and cars should be edgy, their shut lines and feature lines rising upward, without concern for the restraint of Bauhaus geometry. I felt like I was modern next to the ancient of the Jaguar. The Mercedes-Benz C200K is the sedan you should be driving if you want to show that you are ahead of the game, knowing what’s new and knowing what’s around the corner. You feel avant-garde, which brings me to the next point.

The C200K I had was in Avantgarde trim, which means there is no longer a traditional Mercedes-Benz grille and a three-pointed star on the bonnet, pointing up to tell you where the front ends. Instead, there is a coupé-like three-pointed star inside the grille.

Through my lifetime, this feature was reserved for Mercedes’ sport cars and commercial vehicles. The A- and B-class were exceptions but by Mercedes standards, they might be thought of as utilitarian. Never had it been applied to a sedan, at least not by Mercedes itself. Putting the big logo into the grille was something that after-market souperuppers did. They were usually the rich Arab or Chinese types and once upon a time they were rather showy, hanging chandeliers from the interior.

Mercedes-Benz has seemingly acknowledged that all this is going on and has allowed a trim level out of the factory like this, stock. And it’s right here at the front where the C-Klasse breaks the rules about what a Mercedes is.

Once upon a time, the Mercedes-Benz was the choice of doctors and sensible professionals. And taxi drivers. Not for sporting drivers. Now, to signal its intent, the C Avantgarde says, ‘Look at me. Look at me. Do not bloody buy me as a taxi.’

Drivers who want more tradition can still opt for the Classic and Elegance trims, where they can still get a regular Mercedes sedan front end.

But Mercedes is chasing that younger customer and even if the combination of the coupé grille and four doors seems odd now, I’m willing to bet that we’ll get used to it.

And Mr BMW Man might just be tempted out of the 3-series as a result, while the straight lines might just do the same with Mr A4.

The battle continues in 2008 when the new A4 arrives. Then, it’s going to get, in the words of Arte Johnson in his best German accent, ‘Very interesting.

Expanded from issue 25 of Lucire