If you think Stephen Farmer’s Pontiac looks good from the top, wait till you see what’s hiding underneath. 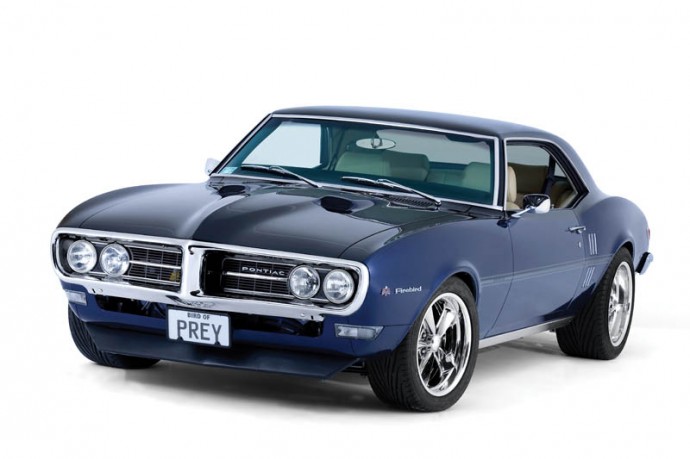 It’s all too common these days to find cars that look like the toughest thing since Jake the Muss, but which lack any real substance underneath it all. So it’s refreshing when you stumble upon a car such as Stephen Farmer’s 1968 Pontiac Firebird, which is far more than initially meets the eye.

From the outset, it’s easy to see the car has been well-built, although it’s fair to say it looks more like Jake the Muss wearing lipstick and a summer dress than it does anything tough. However, the car could be compared to some sort of archaeologist’s dream. The more you dig and look, the more you find, including things that you didn’t know ever existed, and parts that have never before been seen on this side of the globe.

Given the spare-no-expense quality of the Firebird, it’s perhaps surprising to learn that Stephen had never previously owned a muscle car. He was, however, lucky enough to grow up around American iron. “I remember the late ’60s when dad had a ’68 Pontiac Laurentian with bench seats, with the same peaked nose, and the days when we’d go to Browns Bay for holidays; it was miles away then. I have great memories of that car, but now I’m older and know a bit more, the Firebird is a better car.” 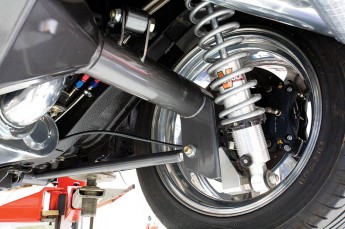 But why, after all these years, build such an impressive beast? The short version goes something like this: after being around motorsport and particularly circuit racing all his life, when he returned from overseas 10 years ago Stephen got involved with International Motorsport and its owner, Lyall Williamson. International Motorsport runs a host of circuit cars, including NZV8 touring cars, Porsche Cup cars and more. “During the motorsport off-season, a lot of International Motorsport’s resources were underutilised,” Stephen says. “Lyall had recognised this in the past, and had the staff perform a few very impressive nut and bolt restorations on Mustangs and an old Porsche, although one of the Mustangs did end up with an NZV8 engine in it!”

Knowing International Motorsport had the knowledge ” thanks to Lyall and his staff ” the facilities and contacts after years of being involved in the motorsport scene, it made sense for Stephen and Lyall to join forces and create a company that could work alongside the motorsport business and focus on creating vehicles such as the Pontiac that Stephen was dreaming of. And so International Performance Classics was born.

The first project for the new venture was sourced and the rest is history.

The Bird Has Landed

After a six-month search for the perfect starting point, a suitable base was found at West Coast Classics in Tauranga. The car was nothing flash, just a run-of-the-mill original black plate California car ” which was about to be transformed forever.

“Once I found the Pontiac the build sheet began, with input from lots of people, and hours of establishing relationships with US suppliers like Chassisworks, Classic industries, and Vintage Air, to name a few,” Stephen says. “We eventually had a container arrive from the USA with virtually every part to turn the classic Pontiac into what we saw as a performance classic.

“Spending a lot of time forming the build list helped the project, as the focus of how it was to end up was there very early on. Also having 90 per cent of the parts means there is less opportunity to continually change it,” Stephen says, laughing. 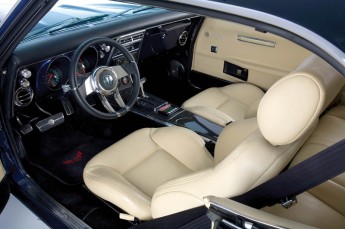 If the names mentioned above don’t give you some idea that the car is oozing with top-shelf bits, check out the photo of the undercarriage. There you will see a full replacement front chassis clip from Chassisworks. Stephen knew that this ” rather than just adding Chassisworks suspension arms and coil-overs to the original chassis ” was the ultimate way to make the car drive like a brand new one.

The rack and pinion power steering came as part of the front end package along with a 19mm sway bar and full-length sub-frame connectors.

With such a setup in the front, the standard rear end would have never sufficed, hence the decision to make it equally impressive. There isn’t a single factory item left in the rear brake and suspension setup, nor the front for that matter.

As part of that rear-end assembly, a sheet metal Chassisworks FAB9 nine-inch diff fitted with a Tru Trac LSD and strange 31-spline axles is now held in place by a four-link setup with adjustable coil-overs. “When working on the rear end, our race experience has shown us that bushed four-links are no good, so we modified all the arms to utilise spherical rod ends, as well as making the top bars adjustable to get the car to handle even better,” Stephen says.

When they were ordered, both front and rear suspension packages were specced with massive Wilwood brakes. Up front the two-piece rotors measure 330mm in diameter; at 328mm, they aren’t much smaller down the rear.

It’s not only the big rotors and the matching four-pot callipers that are fitted all-round which make the setup impressive, but also the items not normally seen on a car in New Zealand, such as CNC-machined billet calliper mounts.

This attention to detail and addiction to the very best parts really does make the car so much more than initially meets the eye. Rather than run a vacuum-assisted brake booster, for example, the car has been fitted with a HydraTech power steering pump-operated booster, which is a very neat piece of equipment.

The Power Of One 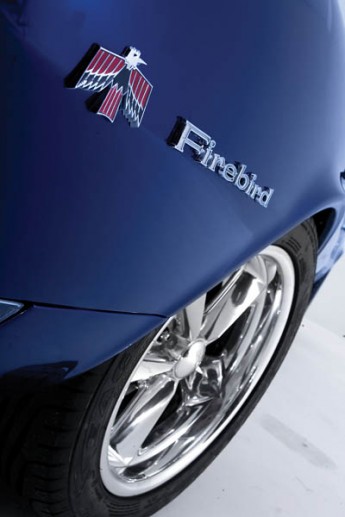 As a showpiece for International Performance Classics (IPC), the car was always going to need a tough engine setup. Originally the GM Performance 502ci crate motor the team selected was to run with the supplied GM electronics. But after finding the GM ECC to be faulty, it was decided that local support and knowledge would be best, and the car now runs a FAST ECU wired and tuned by C&M Performance.

The cast iron big block hiding under the raised intake manifold is fitted with a forged crank, shot peened rods and forged pistons to give a 9.6:1 compression ratio. The 110cc aluminium heads feature 2.25- and 1.88-inch stainless valves that are given instructions by a hydraulic roller lift cam. The resulting noise emanating from the Chassisworks headers and twin three-inch custom system sounds not unlike Satan waking up with a hangover and realising he’s out of coffee and cigarettes. Yes, it’s angry. Very angry.

Thankfully, its anger makes it neither hard to drive nor temperamental, thanks no doubt to the FAST electronic fuel injection and plenty of dyno time. “When we first got it running, it would heat the fuel in the tank and fuel would come out the breather. Our race guys figured out the solution: an insulated tank and a custom expansion chamber, which have worked out great,” Stephen explained when he saw me gazing in awe at the underside of the car.

Everywhere you look beneath the Firebird, you find parts and workmanship that impress. Naturally, this also flows into areas that are more commonly seen, such as the engine bay. Once there, if you take your eyes off that polished intake, you will find a custom firewall, hidden wiring, Be Cool aluminium radiator and overflow, and a very cool-looking Vintage Air serpentine belt system.

The impressive engine didn’t come without its problems, however. “The challenges were mostly around getting the engine to fit without altering the lines too much,” Stephen notes, “hence the two-bonnet cut and shut.”

This was done by slicing up two new bonnets and re-welding them to gain 25mm in height over the Ram Jet manifold. Yet it still looks stock. “Though there was lots of debate over the curve at the nose, with words like eagle, sparrow and many other birds flying about during that week,” Stephen recalls.

As well as the beak enlargement, the guards have been mildly flared to allow slightly bigger rubber to be fitted, and with 400-odd horsepower passing through the rear treads on the C&M dyno, you can see why it’s needed.

With International Motorsport owning its own panel and paint shop, Accent Panel & Paint, the bodywork was performed in-house, as was the application of the two-tone black and navy finish that suits the car’s lines superbly.

The Finer Things In Life

With such a dark and understated exterior, the tan-coloured leather that IPC had Ian Goodwin stitch was the perfect choice to lighten things up. The stitch-work continues into the boot, where removable panels allow access to the battery, fuel system and Alpine amplifier. Below the custom carpet are two layers of Dynamat, which make the cabin a very comfortable place to be, and assist the audio setup in terms of clarity.

It’s not the customised Flaming River steering wheel or the custom gauges that draw the most attention to the interior, but the LCD display fitted to the custom carbon fibre centre console. The display and associated buttons make up a Compushift electronic gearbox control module, which allows shift points for the GM 4L80ESS transmission to be adjusted on the fly. The SS in the gearbox’s name signifies the 4L80E is an upspecced street/strip version complete with high energy clutches and bands, improved electronics, a modified high output pump and valve body as well as a 2500rpm stall. 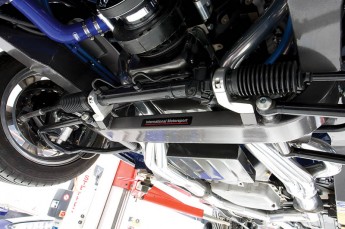 There are usually all sorts of challenges in a build of this magnitude, although in this case, they were different from most. “The biggest challenge was holding the race team back,” Stephen admits.

“Every part was critically assessed along the lines of, ‘That’s crap, we can make a better one,’ hence suspension rod ends, tidying all the welding on parts, painting them to match, custom making of mounts and brackets etcetera, which does make fitting the budget interesting. The other [challenge] was Lyall’s 100 per cent commitment to quality, and his I’ll-know-even-if-you-can’t-see-it stance on building cars.” It’s this attitude that makes the Pontiac so superior to vehicles that look good on the surface but are rubbish below.

Now the bird is completed, what’s next? IPC currently has a fantastic Eleanor-style Mustang in the build that is being constructed to the same standard as the Pontiac, albeit with a brand new Dynacorn body shell. Sitting beside that in the workshop is a Mustang project that came about after the IPC boys made a trip to SEMA last year. It’s a heavily customised ’67 that upon completion will be good enough to make the trip and be displayed against the top cars to come out of America.

It’s fairly obvious IPC has no shortage of ideas, skilled workers, workshop space and commitment to create many more masterpieces such as the Pontiac in the years to come. 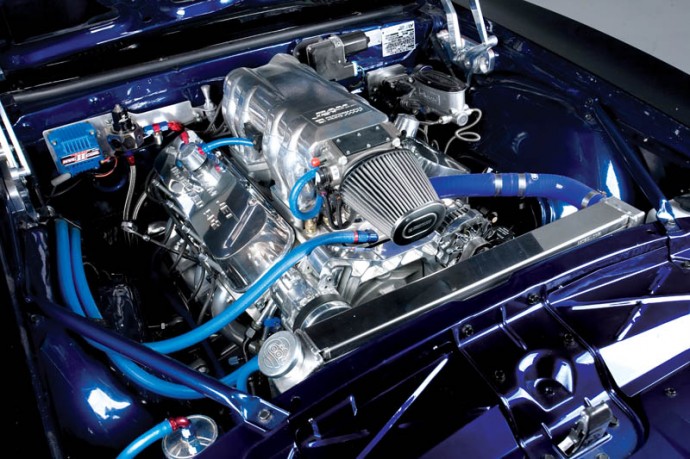 Owner name: Stephen Farmer / International Performance Classics
Age: Older than the car
Occupation: IPC director
Previously owned cars: I stopped counting at 22, but this is the first hot rod
Dream car: It’s always the next one!
Why the Pontiac: I remember the late ’60s when dad had a ’68 Pontiac Laurentian with bench seats, with the same peaked nose, and the days when we’d go to Browns Bay for holidays. So just a great car memory
Build time: 18 months
Length of ownership: Started looking mid-’06, purchased this early ’07, finished end ’08
People to thank: The entire team at IPC/IMS who stripped, rebuilt, fabricated, prepped and modified every part, panel and piece. The IMS V8 and Porsche race team guys who always had great ideas, mostly involving more power. Lyall the chief quality controller, CJ from C&M Performance who wired and tuned it, Mark Stokes for keeping it legal, the family and every other person who had input or worked on this great bird of prey!