Developers, when contemplating how to continue a franchise that left things so thoroughly wrapped - speak to The Coalition. Not only did Rod Fergusson and his team honour everything that came before, but with Gears of War 4 they also managed to make solid additions to the multiplayer, tell a great, satisfying story, and leave more than enough unresolved plot points to justify future titles. 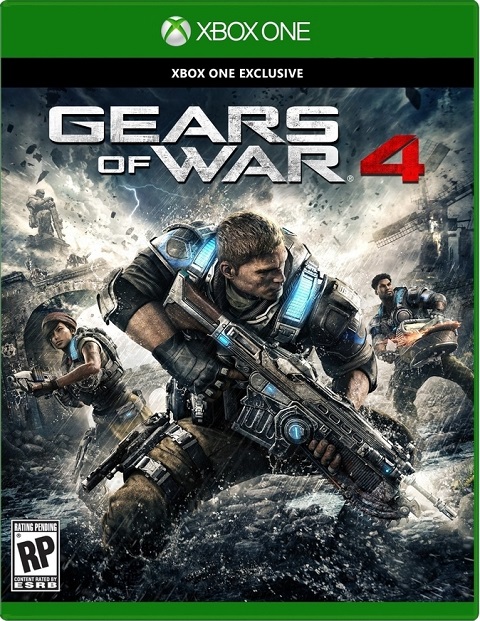 The Coalition hit the ground running last year with a great remaster of the first title, and have done an amazing job this go round, successfully continuing the story from where Cliff Bleszinski and his old Epic Games team left off. Whether you’ve been a Gears-head from day-one back in 2006, or fresh out of COG-camp trying it for the first time, there’s something here for you.

Picking up 25 years after the end of the war against the Locust, the COG (Coalition of Ordered Governments) have successfully brought civilization back from the brink of extinction. New settlements are being constructed in the blink-of-an-eye by worker-bots called DeeBees, and other than a mysterious “Windflare” electrical storm that roams the land, everything seems peaceful - but, not everyone’s a fan of the government’s authoritarian way. Citizens of the COG have begun to go missing, and those who call themselves “Outsiders” are about to find themselves in a whole host of problems.

From the opening prologue, to the closing chapters, Gears of War 4 went above and beyond, delivering everything I expected, and more. Each act of this beautiful looking, tighter, more personal story provided exciting moments of surprise, shock, and awe, all on top of a script that felt natural, fun, and epic.

The new cast of characters are charismatic, relatable, and likable from the get-go. Even when familiar faces turn up (in some of the best moments I’ve seen in video games for a long while), other than an initial ping of sadness that the whole game wasn’t following them, I was never disappointed that I didn’t get to play in Delta Squad’s shoes. When you see how they pull off a thing they incredibly subtly tease early on… OH BOY! Are you in for a ride! I had a grin from ear-to-ear all the way through those final chapters.

In fact, I was laughing out loud, or had a stupidly large smile (or look of horror) on my face for the majority of the game - thanks mostly to the perfectly timed dialogue, and humorous, action-packed, and occasionally shocking scenes. Main characters JD and Del have a chemistry that screams they’ve been friends, more akin to brothers, since childhood, and some of the scenes with Kait are fun in a “what kind of relationship/situation have I gotten myself into” kind of way, all without making her seem weak - something I’ve found the Gears of War franchise has excelled at with all its characters.

When it comes to the types of enemies you’ll be facing, Gears of War 4 introduces an almost entirely new roster of foes in the form of two factions - the robotic DeeBees, and the mysterious Swarm. When I first heard about these new villains, I was worried that the conflict may be a little forced, but everything works naturally, and the justifications for going up against them works great.

Being the worker force for the COG, the DeeBees come in a range of types, and many of them provide a few new types of weapons. My first playthrough, I found I was using the Shepard’s Enforcer quite a bit - the ammunition was always available (especially during fights against the DBs), and I liked how good it was in close to mid range, especially with my aiming on the controller. Other weapons introduced by these mechanical monsters were a long range electrical rifle that requires a charge to use, and a weapons called the Overkill, which seemed to fire multiple concussive blasts in short order - this was great for taking down the larger DB types that actually carried this weapon.

On the Swarm’s side, I’d rather not get too detailed with regard to their ranks. Suffice to say there are a number of types that require various strategies to stay alive - especially in the harder difficulties. I will say this however; I absolutely loved chainsawing my way through the multiple swaths of juvies that you face. This tactic worked like a charm when playing on normal. Me laughing manically as I sliced and diced my way through one after the other, chaining kills in quick succession, continuing unimpeded until that last-foe-down sound effect goes off - glorious! It was a little disappointing (but understandable) that it didn’t work quite as well on legendary.

Back to the topic of characters, something I’ve always liked about Gears of War is that, after chainsawing your way through the blood, gore and violence, at its heart, it’s a story about family. Children running away from their parents, paying for their mistakes, or feeling regret for neglecting them and trying to make things right - these are at its core.

Along with the powerful familial themes, there are a number of other plot points that are brought up that aren’t answered. The story does a great job at providing a satisfying tale with no dangling threads, but world building questions are raised numerous times within the dialogue and revelations throughout the game - and from the many possible seeds sown I look forward to seeing where we are taken in future titles.

With regards to gameplay, it’s more of the cover-based pop-and-shoot 3rd-person action that Gears is known for. Enemies are still bullet sponges with the odd weak points, but overall I found the encounters well balanced. When I died (especially during my Legendary run) I felt like it was because I was rushing, rather than picking my spots and shots.

Control-wise, the game feels a little sluggish when using a controller, but no-more than you’d expect from a Gears game, and possible to improve by tweaking the sensitivity. The flip-side being that playing on my Windows 10 PC - thanks to it being a part of the Xbox Play Anywhere program – playing with a mouse and keyboard, helped make light work of even the toughest situations.

Moving around the world, even with the keyboard and mouse, characters feel as though they weigh a ton - except when you seem to magnetically slide snap-to-cover. In multiplayer, using this technique to zip around maps may having people feeling like it’s an “unfair” skill-based advantage, but the range it works at isn’t as large as it was in the Gears of War 4 Multiplayer Beta. All I can really say on this is that during the matches I played online, I never found it to be an issue.

For those wondering, PC players will be able to play with their friends on the Xbox One in any co-op session of the campaign, as well as in any custom versus or horde mode match. The only time a PC player won’t be able to play with a console player is in the public multiplayer servers, in those it’s PC vs. PC, and Xbox One vs. Xbox One. At this time I have not tested using an Xbox Controller on the PC to connect to a public match in order to see if I am matched up with a console player, this is because at the time of writing this there are too few people playing to be able to find a match outside the scheduled custom multiplayer matches.

Customization, and playing the way you want seems to be a big part of the multiplayer. Whether it’s one of the five classes in Horde 3.0, choosing what sort of bounty you want to place on yourself as a means to garner bonus experience points by completing specific tasks, or merely changing your character and weapon skins. It’s all up to you, based on what you’ve unlocked using the various types of purchasable packs.

Yes, like many games releasing at the moment, Gears of War 4 also features a microtransaction system. Thankfully the coins required to purchase the four types of packs are collected by merely playing in multiplayer and horde. They are also purchasable using real-world currency, and a discounted bundle that contains multiple types of packs is available, but these are all optional.

The downside to the packs is that they are the means by-which you acquire the incredibly useful horde 3.0 class skills. Luckily this isn’t so much a versus mode, as it is a cooperative one, so any advantages one player might have over another only really give the possibility of that player's contributions to the team being increased.

The only other major use of the packs is for collecting new bounties (a new system for leveling faster), or for unlocking said character and weapon skins. There’s also a crafting system in place that you can use to destroy cards to gather resources, and then use those resources to create the cards you want.

Based on the rarity of the card, the cost in resources will change - it’s a pretty handy system for creating the loadout you really desire, especially when you’re unlocking packs that aren’t giving you want you need. Duplicates make for great ways to get those resources once you’ve levelled those cards up.

At this point you might be asking how the game looks? And does it fare better on the PC? Well, I’m pleased to say that other than the keyboard and mouse options, there isn’t a massive difference between the versions. Yes the game does look great on a reasonable rig, and it’s neat being able to average just under 60fps running everything on Ultra with my Intel Skylake 3.5Ghz i5-6600k processor, 16Gb DDR4 ram, and GeForce 6GB GTX980TI graphics card, but I did notice that during the cutscenes (never gameplay) that my PC did have framerates drops, resulting is a little bit of a stutter, or occasional lip-sync issue. Interestingly, this is something I never noticed while playing the campaign using the Xbox One, which also ran silky smooth, and looked great.

Speaking of things looking great, the game is quite beautiful, and this is only thrown in your face as you’re introduced to the weather effects that are employed throughout. Massive wind storms hurling debris and bodies, with jaw-droppingly gorgeous vistas in the skybox, only to be made more so with the introduction of lightning rippling through the backdrop, and eventually lighting up the entire stage. These moments, on top of the numerous quieter scenes, are just some of the less gruesome ways the game’s beauty is able to shine.

As far as the blood and gore, that also is deliciously revolting in all the best ways. Chainsawing your way through glowing slime filled pods, runny snot-like barricades, or just the numerous enemy types all look amazing. Blasting an enemy into giblets is still a sight to behold, and that is only enhanced by-way of all the new enemy types that players get to go up against.

Gears of War 4 is just plain awesome. It’s a blast from start to finish, and I had a massive grin on my face almost the entire time. It’s one of the best looking games on the Xbox One to date, the XPA features are great, it provides a robust cooperative and versus multiplayer suite, and The Coalition truly went and crafted a story that not only does the franchise proud, but sets the stage for a new saga. If you’re a fan of 3rd person action games, and aren’t afraid of a little gore with your fun, then I can’t recommend this title more.

By: Luke Batt On: Xbox One