Confused? You will be, unless you’ve played all the previous Dishonored installments. Why the publisher thought releasing Death of the Outsider as a standalone would make sense financially – oh... I see what happened. God dammit, Bethesda. 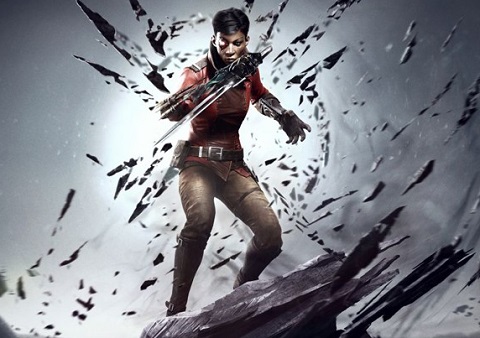 After helping restore a Kaldwin to the throne, Billie is at a loose end, and so decides to track down her mentor/father figure/man she betrayed: Daud, the Knife of Dunwall. They decide that the Outsider, a supernatural being that exists outside of time and space in the Void (and totally-not-my-weird man-crush) is to blame for everything wrong with the Empire, and set out to murder him.

OK guys, sure, you choose to murder people for a living – but he helps people teleport so he’s obviously the bad guy here. Whatever.

Since you’re out to put a fancy blade in his heart, my black-eyed boyfriend probably won’t give you his Mark, so instead – oh, he gives you a magic arm. A magic arm that lets you use Void powers. And a cool new eye. Man, Outsider, you’re really playing with fire here.

Displace is Billie’s Blink, the bread-and-butter of Dishonored. Her teleport kink is that she sets a marker first, which she can zap to as long as she maintains line of sight. This is both very useful and incredibly annoying; my favourite strategy of jumping at ledges and Blinking to them now requires a double-tap.

Death of the Outsider also does away with the ever-popular Dark Vision/Void Gaze. Billie rocks Foresight, a remote viewing power straight out of Psi-Ops. This lets you pause time and leave your body, showing nearby Bone Charms, enemies, and other goodies, with the ability to tag them, as well as set a Displace marker. While not as dynamic as older versions, this synergises beautifully with the rest of Billie’s kit, and you’ll have fun with it.

The winner in the powers contest, though, is Semblance. You can steal an unconscious person’s face and walk around wearing it. This is amazing, and made otherwise nightmare situations a breeze. Non-humans, like hounds and Clockwork Soldiers, aren’t fooled, but the first time a guard salutes you because they think you’re their mate will definitely make you giggle as you stab them in the head.

The game does take liberties though; it assumes a Low Chaos ending to the first title and its add-ons, and assumes the same of Dishonored 2. For games that give you so many ways to kill people, they really don’t want you to actually do it.

Level design is built to suit Billie's powers, and the fun of multiple routes and optional objectives keeps things fresh. I was initially disappointed by the five level length, but their size and scope more than makes up for it; it’ll still take a good 16 hours to do things right. You could beat the game in maybe 5 hours if you just ran around stabbing everyone, but you could also shut up because you’re doing it wrong.

I joke, of course, because Dishonored’s whole deal is “play it your way,” and that’s why the removal of the Chaos system doesn’t sit right with me. Yeah, it’s only five levels, and yes Billie isn’t a character that might have qualms against killing, like Corvo or Emily might have. But Dishonored and the Chaos system are inextricably linked, and it felt strange to go without, as my Clean Hands run and Murder Time Xtreme run were basically the same – aside from how much easier and quicker the latter was.

That’s a lie, actually, because my second attempt was in Original Game Plus mode, a slight alteration that allows Billie to use a combination of Emily and Corvo’s powers from Dishonored 2. Don’t get too excited though; it’s just Blink, Dark Vision, and Domino. This was disappointing, especially since both have cool powers that Billie would have had some great fun with. But it does succeed in making the second playthrough feel a bit different in lieu of Chaos, even though I would’ve appreciated more variety.

The voice acting completely nails it. They’re all great, but Rosario Dawson’s Billie Lurk is phenomenal, and Robin Lord Taylor finally gets a chance to express some range as the Outsider, and he gives the role the (in)humanity it's always deserved. There are other A-listers sprinkled in there, as Dishonored is wont to do, and the quality shows. Why more studios don’t pay as much attention to their NPC dialogue I’ll never know, but aside from one irritating line about abandoning your kids in Dunwall, it was fresh, fun, and worldbuilding as hell.

Sticking with sound, the music is again top notch, and fits the tone and setting as beautifully as it ever did. I’ve always adored the stringy, steampunky style of Dunwall and Karnaca, but it’s especially poignant this time, as this could be the last time Dishonored gets its real music; composer Daniel Licht sadly passed away earlier this year. A review might seem like a strange place to say this, but the man did some great work on Dishonored and beyond, and will be missed. Arkane have dedicated the game to Daniel, and that too is a classy move.

Overall, Death of the Outsider ties up the first arc of Dishonored nicely; I have no idea where it’s going to go next, and all I can do is pray that Arkane don’t call it a day, because I adore this series. All other issues seem trivial in the face of it being such a well-crafted piece of art, and my main complaint is that there simply isn't enough of it. I adore this series, and this game. Buy it, play it, and love it.

My finest moment? In the third level, I used my Semblance power and strolled past a guard. He nodded, saluted me, and asked me the question I’ve wanted this series to ask me for five long years.

“Shall we gather for whiskey and cigars tonight?”

Dishonored: Death of the Outsider
On PS4 | Xbox One | PC

By: Brian McDonald On: PlayStation 4