"Foxcatcher" is one brushstroke of creative licensing away from becoming a horror film—and, in many way, this sordid true-life tale of jealousy, obsession and probable madness already is. The picture, directed by Bennett Miller (2011's "Moneyball") and co-written by Dan Futterman (2005's "Capote") and E. Max Frye (1986's "Something Wild"), is intoxicatingly sad, a psychological study of two men whose crossed paths irrevocably altered more lives than just their own. In one corner is down-on-his-luck wrestler Mark Schultz (Channing Tatum), a 1984 Olympic gold medalist who, three years later, is looking to reclaim the victories of his past. In the other corner is author-explorer-ornithologist-philatelist-philanthropist-coach John E. du Pont (Steve Carell), heir to the largest chemical corporation in the world, who has built a multimillion-dollar wrestling facility on the property of his family's storied Pennsylvania estate. When Mark receives an offer to move to the bucolic Foxcatcher Farm and be trained by John in preparation for the 1988 Olympics in Seoul, he is in no position to turn it down. With his career opportunities dried up and few job prospects beyond speaking engagements at schools, he sees John as his last, best chance at a comeback. As their relationship complicates and Mark's older brother, fellow wrestling champion David (Mark Ruffalo), is drawn into their circle, John finds himself tormented by his need for power and respect in the face of personal dreams left unfulfilled. 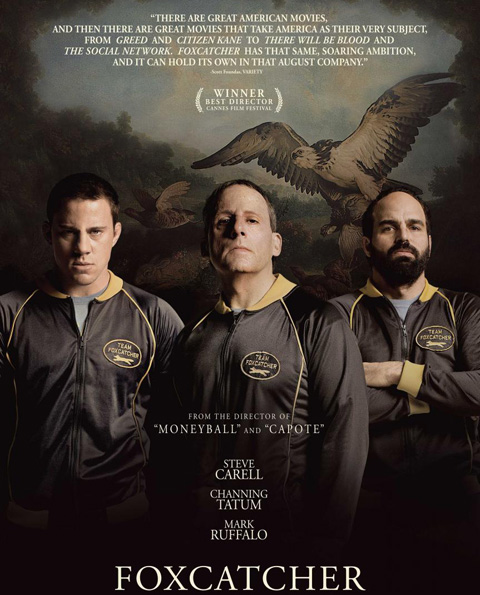 With deliberate unease and an arresting visage of atmosphere, "Foxcatcher" takes its time but is never left wanting for involvement. Miller and director of photography Greig Fraser (2012's "Zero Dark Thirty") capture their characters with a raw, cinéma vérité-style urgency and their surroundings with elegant pictorial precision. The blue-collar strain of Mark's reality stands in contrast to John's lush, secluded residence at Foxcatcher Farm. Surrounded by stately architecture, impeccable interior design, rustic horse stables, and gorgeous woodsy property that appears to be permanently shrouded in mist and accented by foliage, John's home is at once idyllic and lonesome. When Mark is summoned to the estate—he is transported by helicopter—and invited to move into a chalet on the grounds, there is a piece of him that is unsure of the situation, but a much larger part that is drawn to this curiously inspiring man's promises of getting him a spot on the 1988 Olympics' US Wrestling team. His new coach's philosophy on the country's faltering value system is one that Mark shares, yet there is also a darker, contradictory side to his methods and influences. Thus, John wants his star athlete to be the best he can be, but is not above introducing him to cocaine and, for all intents and purposes, making him his houseboy. Whether there is anything sexual going on between them, it is kept strictly subtextual. Miller is not in the art of sensationalism and conjecture, and the film is better for it.

Demonstrating a depth and range impossible to have predicted as few as five years ago, Channing Tatum (2014's "22 Jump Street") is outstanding as Mark Schultz. Running parallel to his character, Tatum trained extensively for the physically and emotionally demanding role, and the hard work he put into shaping his body and sports technique is a crucial authentic detail matched by his dramatic fortitude. Mark's journey—from faded athlete, to reenergized hopeful, to John's manipulated possession, to someone who finally makes a decision to take back control of his life—is riveting to behold. For possibly the first time in his career, Tatum becomes the person he is playing so fully that the actor's celebrity ceases to exist.

In a picture of many transformations, a virtually unrecognizable Steve Carell (2013's "The Way Way Back") is destined to receive the most vocal and passionate acclaim. His work is nothing short of revelatory as the enigmatic John E. du Pont, a broken, unhappy soul who relies on his role of authority to compensate for the acceptance and approval he has never gotten from his highly critical mom, Jean (Vanessa Redgrave). "Wrestling is a low sport," she says, her words piercing him like daggers only a mother can throw, "and I don't like seeing you being low." John has all the money he could ever need, but can only live vicariously through the younger, more able athletes he brings on at Foxcatcher Farm. Watching a self-funded documentary on himself that no one else cares about, John is reminded of the things he doesn't have rather than all that he does. It is a notion that plagues him and one that the viewer can only presume played a part in the cold-blooded act of violence he ultimately committed in 1996.

In a key supporting role, Mark Ruffalo (2013's "Now You See Me") affectingly plays the even-headed Dave Schultz, unaware of the contentiousness between his brother and John du Pont when he arrives to train at the facility. If there is an undernourished aspect to this narrative telling, it is in the short shrift Dave's family—wife Nancy (Sienna Miller) and two young kids—are given once they move to Foxcatcher. Never seen actually living there or hinting at what their lives might be like, they are oddly forgotten about and Sienna Miller (2007's "Stardust"), as Nancy, remains sidelined until she pops up again near the end. The timeline is deceptive, as well, suggesting during one edit the passing of a single season rather than the seven or eight years that have actually gone by. Better is the handling of John's relationship with his mom, whom he tries to please but never quite can. Vanessa Redgrave (2013's "Lee Daniels' The Butler") takes a part that cannot make up more than ten minutes of screen time and whips it into a perfect morsel of a performance that lingers in one's thoughts long after she has exited.

Tantalizing and disturbing in equal measure, "Foxcatcher" is a firecracker of a thriller about a perfect storm of events that led to an inexplicable tragedy. Miller is not out to set hearts racing with conventional sequences of suspense and menace, and yet the mounting disquiet he ratchets is palpably felt. He also wisely chooses not to speculate too much, accurately trusting that the real story's unanswered questions will only add to its haunting mystique. As the portentous melodies of Rob Simonsen's (2013's "The Spectacular Now") exceptional score play on, the film's provocative dichotomy between Channing Tatum's Mark Schultz and Steve Carell's John du Pont proves explosive in its fateful implosion. What happened next, no one saw coming.

(for some drug use and a scene of violence).