Superficially, "Annihilation" may look from the outside like yet another derivative facsimile of Ridley Scott's "Alien," a science-fiction thriller where a group of astronauts/soldiers/scientists venture into the unknown and are picked off one at a time by a deadly unidentified force or creature. Writer-director Alex Garland (2015's "Ex Machina") does not deal in mimicking what has come before. Thus, while the nuts-and-bolts premise sounds like the set-up for the familiar, what viewers are treated to instead is altogether fresh and mesmerizing and thoroughly unshakeable, a quaking, thought-provoking story of grief, lost loves, unearthly metamorphoses, and the delicate yet all-powerful cellular make-up which connects everything in the world—for better and for worse. 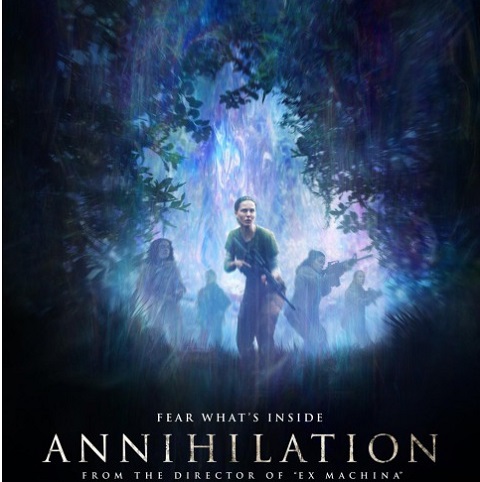 It has been one year since Lena's (Natalie Portman) soldier husband, Kane (Oscar Isaac), abruptly left and didn't return from an expedition into the Florida Everglades, the site of an ever-expanding, unexplainable disaster zone known as The Shimmer. No one who has ever gone into The Shimmer comes back out. And then Kane does just that, appearing in his home with few memories he is willing to divulge about his time away. When his body suddenly experiences massive internal bleeding and multiple organ failure, Lena, a biologist and Johns Hopkins professor, wants to get to the bottom of what has happened to her husband. Recruited by psychologist Dr. Ventress (Jennifer Jason Leigh) to accompany her and three fellow specialists—medic Anya (Gina Rodriguez), physicist Josie (Tessa Thompson), and anthropologist Cass (Tuva Novotny)—into The Shimmer, Lena accepts what could very well be a suicide mission. Where they go and what they experience within their deceptively beautiful, increasingly malignant surroundings will test their strength, their fortitude, and their determination to reach the spot of initial impact—a lonesome lighthouse standing along the shore—where all their answers may lie.

Based on Jeff VanderMeer's 2014 novel of the same name, "Annihilation" is the kind of film that sticks to one's mind and bones. Impossible to discount, it reveals increasingly captivating layers throughout and even more once it's over. Like 2016's astounding Denis Villeneuve-helmed "Arrival," this is serious, thinking-person's sci-fi set within a world that feels as real as our own. A motion picture of imagination and humanity, a melding of the sumptuously scientific and the thrillingly cathartic, "Annihilation" successfully skirts the line between upscale and down-and-dirty.

The initial introduction of Lena's central cohorts feels slightly stock, each one receiving little more than a one-sentence description before they are heading into the hornet's nest. While more might have been done to build them up at the onset, hints about who they are and why each one is willing to risk it all for this perilous expedition gradually and effectively reveal themselves. That they are all female is passingly mentioned once and never again, beside the point and better for it. It is Lena whose journey we most intently follow, however, and her life both before and after Kane's disappearance is methodically dispersed in poignant introductory scenes and insightful flashbacks. An early montage of Lena's struggles to move on, scored exquisitely to Crosby, Stills & Nash's " "Hopelessly Hoping," is unforgettable.

'Unforgettable' is also a word which could best be used to describe The Shimmer, a landscape marrying the familiar with the alien, where plant DNA, animal DNA, and human DNA refract upon each other like a macabre evolutionary prism. A rousing accomplishment in conceptual and technical creativity, it's a rainbow-fogged, genre-lover's paradise of sheer intoxication and untold horrors. Just as the visuals themselves have a way of getting under one's skin—they're fantastical, gorgeous, and nightmarish all at once—so, too, does the melodically screeching, hauntingly otherworldly music score by composers Geoff Barrow & Ben Salisbury (2017's "Free Fire"). The sound design, full of deviously ethereal and ingeniously subliminal cues, is one of the most impressive in recent memory.

The encroaching scares, when they come, go for the jugular without overplaying their hand. From a chilling find in a drained swimming pool to the lighthouse-set third act, the film provides new, unsettling sights never before glimpsed. It is a mid-section set-piece wherein the women are stalked by a late-night prowler seemingly born from their wildest fears that takes the cake, though, approaching a level of unquenchable fright not often or easily obtained in film.

Natalie Portman (2017's "Song to Song") is tremendous as Lena, an emotionally complex protagonist who has reached a fateful turning point in her life. The more we learn about her mistakes as well as her devotion, the more authentic—and sympathetic—she becomes. She is joined by other wonderful actors: Gina Rodriguez (2016's "Deepwater Horizon"), whose Chicago medic Anya may not be as tough as she lets on; Tessa Thompson (2017's "Thor: Ragnarok"), whose restrained, measured Josie hides untold pains and sadness behind the sleeves of her shirts; Tuva Novotny (2010's "Eat Pray Love"), whose Cass has lost the person she once was in the shadow of tragedy; Jennifer Jason Leigh (2015's "Anomalisa") as Dr. Ventress, shielding her own personal reasons for why she is so determined to learn the genesis and motive of the anomalies all around them; and Oscar Isaac (2017's "Star Wars: Episode VIII – The Last Jedi"), making a deep impression in the small but pivotal role of Lena's husband, Kane.

The deeper one digs into the shuddersome, biologically interconnected pleasures of "Annihilation," the more momentous it feels. Beyond the realm of what one could envision for the planet's future yet eerily plausible all the same, the film expertly builds a skewed fictional reality before reaching a harrowing conclusion impossible to predict. Although this is the first in what could potentially become a series (it is based on book one in author Jeff VanderMeer's so-called "Southern Reach" trilogy), it is a testament to Alex Garland's talent as a filmmaker and writer that it could entirely stand on its own, an oft-towering individual achievement that never, not once, strikes as incomplete. In spite of its title, "Annihilation" isn't just about the end of things, but also about the beginning of something else—an insinuation of profound and portentous consequence.

(for violence, bloody images, language and some sexuality).