Disney's "Pirates of the Caribbean" series has racked up billions of dollars at the box office, but their financial success has rarely, if ever, accurately equated to their filmic quality. A spare enticing visual simply isn't enough to make up for how bloated, empty, tedious, chaotic yet oddly inert they have been, a whole lot of sound and fury adding up to little of consequence. The fifth entry, "Pirates of the Caribbean: Dead Men Tell No Tales," is easily the best since the 2003 original—which is to say it's mediocre but occasionally diverting, and doesn't cause one to want to run screaming from the theater. 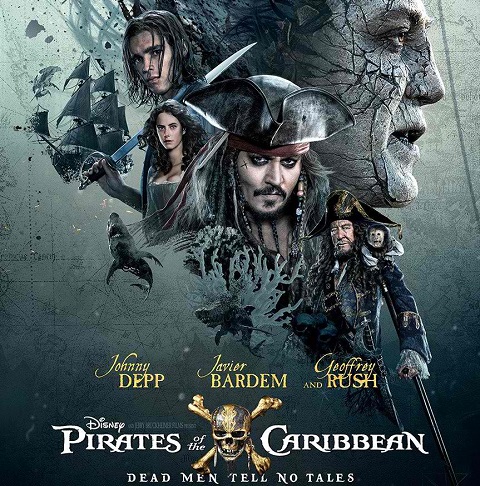 Directors Joachim Rønning & Espen Sandberg (2013's "Kon-Tiki") bring a level of imagination and spectacle to the proceedings that has long been missing from these films, while Johnny Depp (2016's "Alice Through the Looking Glass"), whose rum-loving Captain Jack Sparrow wore out his welcome a few movies ago, recaptures the charm he held in the first picture. The plot, which finds Sparrow and strong-willed astronomer Carina Smyth (Kaya Scodelario) setting sail with Henry Turner (Brenton Thwaites) to locate Poseidon's trident in an attempt to reverse the curse placed upon Henry's father Will (Orlando Bloom), is typically convoluted but leads down a few unexpected avenues. The villain of the piece, a ghostly Spanish corpse from Sparrow's past named Captain Salazar (Javier Bardem), is at least ten times more memorable than Ian McShane's boring Blackbeard from 2011's interminable "Pirates of the Caribbean: On Stranger Tides." Meanwhile, a set-piece involving a perilously swinging guillotine blade might be as inspired as this franchise has ever gotten.

None of "Pirates of the Caribbean: Dead Men Tell No Tales" adds up to much—it takes a while to get going; it's destined to be forgettable in a few weeks' time; a romance between the exceedingly bland Brenton Thwaites (2014's "Maleficent") and the charismatic-but-not-when-she's-acting-opposite-Brenton-Thwaites Kaya Scodelario (2015's "The Scorch Trials") is a non-starter—but at least the filmmakers involved appear to be trying again, and have accordingly given key returning figures (such as Geoffrey Rush's Captain Barbossa) a bit more levity and development than they've been afforded in the past. The series has always been best when delving into the fantastical, the atmospheric, and the supernatural, and "Pirates of the Caribbean: Dead Men Tell No Tales" practically swims in this. Just don't expect to give the film another thought by next morning's light.