Mel Homer is an avid movie goer, sailer, sports lover and baker of Whoopie PIes. After years in radio, including stints at Radio Television Hong Kong, Classic Hits and most recently breakfast co-host at Radio Hauraki, Mel is trying her hand at freelancing.  Follow Mel on twitter @melhomer.

Ask anyone who has ever been to a stand up comedy show.  There is one place you should never, ever sit.  The Front Row.  This is because that guy on the stage, the one who must have a supreme confidence and certain amount of cockiness to be doing what he does for a living, that guy can see you. And he can make eye contact with you.  And he can (and usually will) use you in his routine.

And Stand up comedians are not known for their gentle ways. If they see the whites of your eyes – you’re toast.

So you can imagine my concern when we were ushered in to the Classic and shown to a table so close to the front, I could rest my boots on the stage. Not that I did, of course. I was trying to become one with the wallpaper, so first time NZ comedy festival performer Tom Gleeson wouldn’t see me.  My “ooh look, I’m the wallpaper” technique worked well,  however it wasn’t so successful for the young lawyer sitting next to me.

Australian Comedian Tom Gleeson bounced on to the stage, in jeans, crisp shirt, tie and jacket, looking (and sounding) a bit like a slightly skinnier Peter Helliar (comedian and Rove McManus side kick). He has the same droll Australian delivery - you might recognize him as a regular guest on 7DAYS. 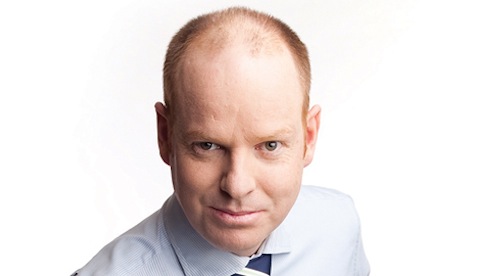 He immediately started getting to know the audience.  We all learnt about the lawyer sitting beside me - 24 works in the corporate side of things – and the Sports Journalist 1 row back  - Guy Heveldt 23, once commentated a hockey game while only seeing half of the pitch – Guy was comedy gold, as it turned out.

Tom was at pains to point out that this wasn’t part of the show, this was just HIM getting to know US.

Tom Gleeson is a master teller of stories and observational humour. Throughout his relaxed one-hour show we learnt about his wife (who must have a great sense of humour herself, seeing as her husband uses their sex life frequently in his show), his one-year-old child, and his take on life as a husband and father.

The mark of a truly good comedian is their ability to turn the mundane into a belly laughingly good yarn.  Tom Gleeson does this, and then some.   His rant about Qantas customer service, and his retelling of his baby getting her vaccinations are not to be missed. He also mixed some great kiwi observational humour into the show (we’re self deprecating to the point of ridiculousness)

There’s nothing to dislike about the man.  He’s self deprecating when he needs to be, cocky when cockiness is called for.  His wit can be cutting, but not to the point where you cringe and feel awkward.

Also, you’ve got to like a guy who asks for feedback at the end of the show, and appears to genuinely want it.

Of course he didn’t get any.  As he so rightly pointed out… we’re kiwis. We won’t say anything, we’ll probably just go and bag him on Facebook later.

Tom Gleeson, on at the Classic until Saturday.