Review: The Boy with Tape on his Face

JJ McConnachie is a writer, movie lover, and technology geek. She also runs Get Frank, so if you have any questions, give her an email! jj@getfrank.co.nz.

Somehow I had missed ever seeing The Boy with Tape on his Face before, even on television, so I headed along to the Bruce Mason Centre in Auckland last night with no expectations, other than a push from a friend who refused to tell me anything about his act, other than “you have to see him.” 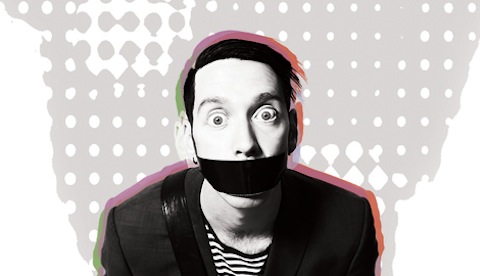 The show opened with a raucous and enthusiastic audience before anyone had even walked on the stage. The opening act, Simon McKinney (aka the man with 1000 voices) started off his act a little predictably, digging around to see if there were any Australians in the audience who’s accent he could mock (there were), before moving on to other nationalities. It felt like a slow start, but once McKinney had warmed up, he managed to get then entire audience in fits of laughter, which of course, is the whole idea. McKinney was a fantastic opening act, warming up the audience well, and my sides were sore before The Boy with Tape on his Face had even walked onto the stage.

When The Boy did arrive, it was easy to see that there were two kinds of people in the audience: Those who had seen The Boy before, and those who hadn’t. Those who had, and knew what to expect, revelled in the interactive elements of the show, sitting up straighter when he walked into the audience to grab people, and laughing before the punch lines had even occurred. The other kind, those who had no idea what to expect (like me), were much more subdued, but not because of a lack of hilarity. The show was incredibly funny, but having never seen anything like it before, I found myself staring open-mouthed in wonder at the use of props, and at the inventiveness of it all. It almost felt too incredible to express aloud, and those of us that hadn’t seen The Boy before were delayed laughers – joining in with the audience’s laughter only after we’d had the chance to really absorb what was going on onstage.

The Boy with Tape on his Face is essentially a mime, but with a difference. There’s music, and a little voice over, but most of it is an inventive use of props and audience interaction. He succeeds in bringing all those childhood games and make believe to life. From using tape measure as lightsabers, to a toothbrush as a propeller, what is so ingenious about The Boy with Tape on his Face is that it is not ingenious at all. He’s simply harnessed the childhood that the rest of us have forgotten, and given it back to us for one hour of incredible showmanship.

The Boy with Tape on his Face aka Sam Wills is touring nationwide 1st – 18th May.