There is a formula that has to be followed when it comes to making a great crime thriller.  The hype post initial screenings of “Alex Cross” weren’t too favourable but I didn’t care.  Curiosity always seems to get the better of me! 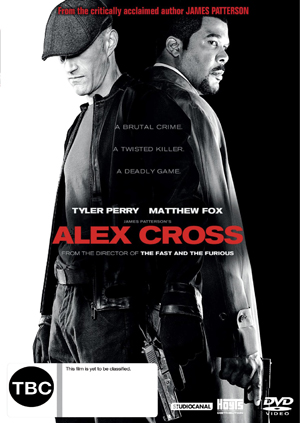 I was fascinated by the fact someone decided to take on the challenge of following up the now cult classics, “Kiss the Girls” and “Along Came a Spider”, both also on screen adaptions from the series of novels by James Paterson.

It was of course the undeniably incredible Morgan Freeman who first mesmerised us with his portrayal of the tortured genius and talented psychologist/detective Alex Cross in these earlier versions so my scepticism was fuelled by the fact that version 2.0 had another star at the helm.

The hype around Freeman’s replacement stood at the forefront of early attempts to get production of the ground.  It was Idris Elba who was lined up as the star when filming started in 2010 but it was Tyler Perry who took over a year later before the final product reached cinemas.

I’m a huge fan of Morgan Freeman but I have to be honest in saying Tyler Perry really steps up to the mark in this movie.  It was clear he knew there was a formula for success and the chemistry between him and the villain of the movie is electric.

It is the villain though in my eyes that really steals the show.  Picasso as he is known is played by a very emaciated Matthew Fox from TV’s “Lost”.  Almost all of the cast including Director, Rob Cohen, all state that Fox and Perry kept their distance while on set to ensure there was constructive tension at all times.  Trust me – it worked!

Rather than give you a scene by scene breakdown of the movie, I’m going to say that there are some great twists and turns that build the suspension and really drive the movie forward.  Thomas Kane is Cross’s crime fighting partner and Edward Burns, as always, does a fine job in this supporting role.

Jean Reno plays Giles Mercier, the rich man at the centre of the investigation and there is some very well delivered black humour from the great John C McGinley who is well cast as Captain Brookwell.

Something keeps bringing me back to Matthew Fox though who does everything is his power to ensure his character is real and haunting.  What we see unfold before our eyes is truly the epitome of narcissistic evil and inflicting pain becomes an almost intrinsic part of his calling.

The crux of the storyline is that Cross will always be a threat to Picasso.  The pain and the suffering will be relentless so he has no choice but to become a self-appointed judge, jury and executioner.  Great in theory but for me the major downfall of the movie is the screenplay which is lack lustre.

Nevertheless, the cast performances are exceptional and there is a quintessential underlying theme of nobility that captures your attention.   At the heart of it all though is a good old cat and mouse saga that takes us on an undulating joyride.  Confucius says the path of revenge requires two graves but he was wrong.

“You don’t play the game, the game plays you” proclaims Thomas Kane and this resonates well with me.  Stay in control and you won’t leave behind the things you love.

Let curiosity get the better of you and check it out on DVD now.