Lauren Drain’s book ‘Banished’ lifts the lid on the Westboro Baptist church. It exposes the inner workings of a cult obsessed with homosexuality and debunks any predispositions about a group intent on telling you that you’re going to Hell. 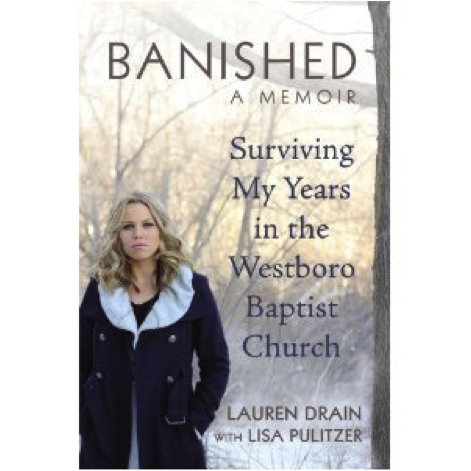 Opening with an overview about her family upbringing in Florida, Lauren speaks about her life before her years in Topeka, Kansas. Drain describes her parent’s backgrounds and speaks of how she found life in Florida. Her father once had an earring, in addition to being a band member, whilst her mother was the kind hearted and caring mother who devoted herself to raising Lauren and her sister.

For much of the early years, religion was not a central discussion topic in the Drain household. Her mother was raised as a Catholic, whilst the father was quite secular. It was not until a chance encounter with a missionary where Steve Drain began to forming a deep interest in religion. From there the journey towards Westboro Baptist begins. Steve goes back to University, working as a lecturer whilst studying. After falling out with the missionary, Drain realigns himself with secular thinking.

In the midst of making a documentary “Hatemongers,” about the Westboro Baptist Church, Steve is won over by Pastor Fred Phelps strong convictions and preaching’s. Lauren, who was assisting him in the making of the documentary held a greater degree of reluctance. As it was, she had been banned from most social settings back home, so moving to Kansas almost seemed uplifting. Getting to know Shirley’s children established a social setting for Lauren to be a teenage girl once again.

Page after page, there is a childlike innocence to the writing. Although written by two grown adults, one cannot help but feel a To Kill a Mockingbird maturity as the book progresses. She is writing how any outsider would feel being thrown into a cult full of hatred. Adding such an intricate approach gives the book an emotive, human side.  Such a side could not have come about from a mere regurgitation of past events.

The book is fantastic. Extensive coverage is given to the journey and transition which Westboro had from being a very serious church to a vicious hate group. “Banished” reveals secrets which most people are unaware of, such as Shirley’s genuine warmth and friendliness or the pastor’s rather soft spoken manner outside the pulpit. Lauren worked incredibly hard with ghost writer Lisa Pulitzer to recall many events in such compelling detail. It is no easy feat. Everything which the church has a militant dislike for is covered comprehensively. Backgrounds of Pastor Phelps and the congregation are given. The reasons behind their strong dislike for homosexuals are given. Isolated reasons behind their other hatreds are also given. Not a detail is missed. Lauren has more than a book to sell; she has a tragic event to share, hoping to convince people to think very carefully before joining any contentious, fringe organisation.

After sending email to the Westboro Baptist church to ask them what their opinion was of the book and where exactly all the mistakes were. Here were their responses.

As to the veracity of the book, it is so filled with lies - the book shops that carry it should offer their customers a little truth in advertising and display it on the fiction shelf.

In the book, she claimed to have had an autographed Babe Ruth baseball card that her father sold. She never had such a thing - she had no valuable baseball cards and left the few cards she had collected when she left Topeka.

I enjoy Lauren. After watching both Louis Theroux documentaries about “The most hated family in America,” the countless interviews and of course the book itself, I’m convinced that she is telling the truth. Tyler Hamilton took a massive tirade of abuse for exposing Lance Armstrong’s secrets. Hopefully one day Lauren’s family is able to muster enough courage and be truthful about Westboro’s fanatical obsessions.

There are some valid points of view the Westboro Baptist Church makes. The war in Afghanistan is an unwinnable war, the importance of the married family, as well as acknowledging that there is a God. What I don’t see as valid is their belief that God is sending everyone except them to Hell, their celebration of death or the conviction of their own goodness for doing these things.

As people begin reading about enclosed cults like the Westboro Baptist church, they can begin to understand how such groups arise and what can be done to prevent others from joining. Lauren may be” Banished” but her family remain members of the alleged Church. Her greatest hope is one day being reunited with them on the other side of the picket fence.

To purchase a copy of  ‘Banished: Surviving My years in the Westboro Baptist Church’ go here or  here.