Lining the pages of the book’s cover are six well known historical figures. The first three: Nelson Mandela, Martin Luther King and Mother Theresa. Below these three are Adolf Hitler, Saddam Hussein and Joseph Stalin. In a simple comparison, each set of photos presents an amazing contrast between how influential each person has been in historical events. For every hero there is a villain. 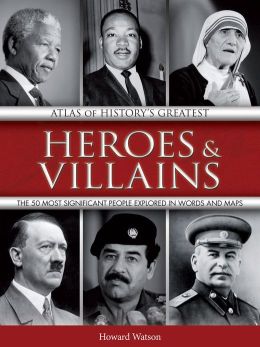 Howard Watson does a fantastic job summarising numerous historical texts and documents into a simple, readable and informative book. With photographs and historical maps aiding many accounts, following Watson’s summaries are very easy. For anyone who has an interest in historical figures but does not have the time or desire to page through countless historical texts, have a read through this book. It will not cover every last event but it certainly addresses key moments in each in the life of each hero or villain.

The summaries are done in chronologic order. Heroes and villains of each generation are classified according to their generation. Beginning in the ancient world and ending in modern times, the underlying characteristics of each person stand out. The all have a desire to be influential and want to make a change. Achieving this requires an extraordinary level of commitment as well as dedication. If these qualities weren’t obvious in their childhood, they certainly became notable later on. Throughout each period of time, these are the only constants of the people. What is happening around them and what they achieve are very different.

An enjoyable part of Heroes and Villains is learning about people who were influential in history but aren’t mentioned very often in historical conversation. Many readers would not know about Owain Glyndwr’s Welsh revolt against the English, notorious Australian villain Ned Kelly or Italian dictator Benito Mussolini. Each of these figures shares the pages with more prominent historical figures such as Genghis Khan, Napoleon Bonaparte and Muammar Ghandi.

Howard Watson has written a very informative book for an “Atlas of History’s greatest Heroes and Villains.” For a historical introduction to mankind’s greatest influencers, read this book.